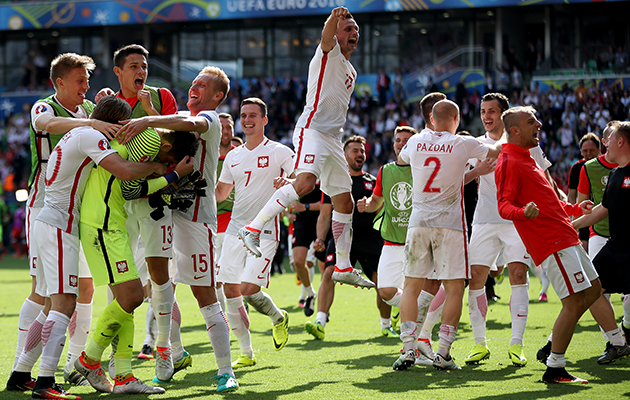 A wondergoal by Xherdan Shaqiri was not enough for Switzerland to overcome Poland in Saint-Etienne in the first of the last-16 matches. After Shaqiri’s marvellous goal cancelled out Jakub Blaszczykowski’s opener, the Poles held out in extra-time and reached the quarter-finals after winnng the penalty shoot-out.

Poland forward Arkadiusz Milik missed an open goal in the first minute and there were further chances spurned by Robert Lewandowski and Kamil Grosicki before Jakub Blaszczykowski gave Poland the lead in the 39th minute. Just as the Swiss were starting to get into the match, Blaszczykowski fired home after being set up by Levandowski’s dummy of Grosicki’s cross, following a long throw-out by Polish keeper Lukasz Fabianski.

Switzerland were a different proposition in the second half as the tiring Poles, who had two fewer rest days since their final group game, dropped deeper to defend their lead. Swiss coach Vladimir Petkovics made bold substitutions but it was Shaqiri who made the breakthrough with a stunning goal for a deserved equaliiser.

In extra time, Poland were content to hold out for penalties. Stephan Lichtsteiner and Robert Lewandowski both converted their kicks before Granit Xhaka executed a terrible miss, shanking his shot way to the left of Swiss keeper Yann Sommer. All the further kicks were dispatched, including Grzegorz Krychowiak’s final penalty that sent Poland into the quarter-finals.

Xherdan Shaqiri’s wondergoal – an acrobatic overhead scissors kick from the edge of the penalty area that brought the Swiss back into the match. A probable goal of the tournament.

Midfielder Grzegorz Krychowiak converted the winning penalty for Poland and through the previous 120 minutes was the glue that held the Polish side together as their reached their first quarter-final.

Jakub Blaszczykowski, who scored against Greece at Euro 2012, became the first Polish player to score at two Euro finals.

Misfiring striker Haris Seferovic was a surprising starter for Switzerland, who only threatened from set-pieces in the first half. And Seferovic stayed on during the second half as Swiss coach Vladimir Petkovic made bold substitutions, bringing on Breel Embolo and Eren Derdiyok as extra strikers. As the Swiss sought a winner, Seferovic hit the crossbar and Poland keeper Lukasz Fabianski produced a brilliant save to deny Derdiyok as penalties loomed.

In contrast, Poland waited until extra-time before making uninspiring changes. By then, they had already settled for penalties – a strategy that ultimately proved successful.