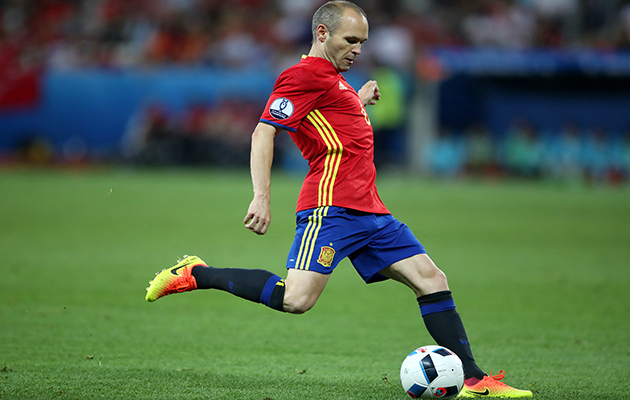 After two rounds of groups matches, here’s a look at how all 24 teams have fared.

The hosts were rescued by late goals in both of their opening games but have yet to be really tested, such is the easy draw they have in Group A.

Didier Deschamps tinkered with his formation for the second game against Albania, but his second-half changes _ introducing the dropped Antoine Griezmann and Paul Pogba – were an admission that he was perhaps a little hasty in omitting his young starlets.

Dimitri Payet has emerged as a genuine international star, while N’Golo Kante is already being referred to as “le nouveau Makelele”.

A disappointment so far, muddling their way through against 10-man Albania and then failing to beat a defence-minded Romania side. Profligate striker Haris Seferovic has the look of a modern-day Stephane Guivarc’h. Admir Mehmedi, scorer against Romania, has been one of the brighter spots, along with new Arsenal signing Granit Xhaka.

The debutants, backed by thousands of travelling fans, have exceeded expectations despite losing captain and talisman Lorik Cana to a silly red card against Switzerland and then losing out to late French goals in Marseille. Right-back Elseid Hysaj has been the pick of the bunch.

After a creditable performance in the tournament opener against France, coach Anghel Iordanescu made the questionable decision to drop Nicolae Stanciu, his best player against the French, for the game against Switzerland. Ultra cautious tactics did them no favours against the Swiss, although Bogdan Stancu (two goals in as many games) could offer Cristiano Ronaldo some advice on taking penalties.

Played well in their opening game and should have beaten Russia. Roy Hodgson’s natural caution prompted the substitution of Wayne Rooney before Russia’s late, undeserved equaliser but the manager deserves credit for his bold half-time changes against Wales – the first ever double half-time substitution by an England manager at a tournament.

Rooney’s reinvention as a midfielder continues, though he has yet to be tested against top opposition, but Harry Kane seems to be paying the price for a long season at Spurs.

Got the breaks against Slovakia in Bordeaux, where fans revelled in their victorious tournament debut. Predictably, Gareth Bale has been crucial; his two goals from three free-kicks in marked contrast to the zero goals in 36 tournament attempts by his Real Madrid colleague Cristiano Ronaldo. England’s quality finally told in the second match.

Unlucky to lose to Wales but impressive when beating Russia, with Marek Hamsik gave one of the individual performances of the tournament so far. It was unfair on Napoli, Serie A runners-up, for Slovak coach Jan Kozak to say Hamsik deserves to be playing for a bigger club.

Beset by injuries to key players Alan Dzagoev and Igor Denisov and distracted by off-the-pitch troubles. Coach Leonid Slutskiy has struggled to fill the midfield void and has restricted the creative-minded Roman Shirokov to substitute cameos. They came strong in the later stages of both opening games, equalising against England and almost clawing back a 2-0 deficit against Slovakia. The team doctor complained that Russian players have been drugs-tested more than other teams.

Supposedly back in the tournament groove after their post World Cup hiccups but the world champions looked shaky in defence without Mats Hummels against Ukraine and could easily have lost to Poland. Mario Gotze looks uncomfortable in the “false nine” role, but Joachim Low has few other options in attack. World Cup Final hero Gotze, under fire for his fitness, delivered one of quotes of the tournament, or any other, for that matter: “Sometimes you are the dog, sometimes you are the tree.”

One of the most impressive teams of the group stages so far. Beat a stoic but limited Northern Ireland and should have got three points against Germany, but for Arkadiusz Milik’s misses.

Exceeding expectations so far, just as in the qualifying campaign. Manager Michael O’Neill has been prepared to take tough decisions, like dropping Kyle Lafferty to the bench for the Ukraine game. Fitting that veteran defender Gareth McCauley, one of O’Neill’s most loyal foot soldiers, got the opening goal against Ukraine to put Northern Ireland on the brink of the knockout stages.

Wholly disappointing but not unexpected, given the paucity of midfield talent. The first team to exit the tournament, following defeats to Germany and Northern Ireland.

The defending champions have put the 2014 World Cup disaster well and truly behind them with two impressive performances. Xavi or Xabi Alonso may no longer be there, but Andres Iniesta is in imperious form and an early contender for player of the tournament.

The decision to leave Diego Costa out of the squad has been vindicated by the form of Alvaro Morata, a striker who has given the midfield something constructive to aim for.

Some impressive form on the pitch, especially from midfielders Ivan Perisic and Ivan Rakitic and blood-stained defender Vedran Corluka. But they have been distracted by off-the-pitch chaos, with fans seemingly determined to embarrass the FA into submission.

The players were clearly unsettled by the late disruption in the Czech Republic game, conceding a late equaliser.

But other factors have been at work, too, with captain Darijo Srna determined to carrying on playing in memory of his recently-deceased father.

Tomas Rosicky, a surprise inclusion in the squad, clocked up more minutes in the first half of the opening match against Spain that he did during an entire injury-hit season with Arsenal. But he and his team-mates have failed to rise to the occasion. Shocking defending against Croatia put them 2-0 down, though they showed commendable spirit to play their way back to 2-2.

One of the biggest disappointments so far. Much was expected of a new generation led by Arda Turan, but the Barcelona man seems strangely subdued and was even booed by his own fans. The cameo performance of teenager Emre Mor, raised in Denmark but recently “persuaded” to play for Turkey and now on his way to Dortmund, offers hope for the future.

Antonio Conte is demonstrating to a wider audience why Chelsea were so keen to hire him. He set his side up brilliantly against Belgium, who were on paper the more talented team but fell into the Azzurri’s trap.

Sweden proved harder to break down, but Eder’s late goal allayed fears that Italy would lack a cutting edge. Shades of 2000, the last time Italy won their opening two games. when they reached the Final.

Unlike Italy, they are succeeding in spite of their coach, not because of him. Ireland’s defensive tactics played into Belgium’s hands but Marc Wilmots does not appear to be in charge of a happy camp. Keeper Thibaut Courtois played down reports of a furious row with Marc Wilmots as “constructive criticism”.

Should have closed out the game against Sweden after an outstanding goal by Wes “Wessi” Hoolahan and then allowed themselves to be hit on the counter-attack by Belgium. Defensive mistakes have cost them dear.

Their fans have created a wall of yellow in the stands but have had little to celebrate on the pitch. Rescued a point against Ireland but a loss of concentration late in the game against Italy has left them comtemplating a tournament exit.

Surprise leaders of their group after two games and proof of how far the lesser teams can go with organisation and self-belief.

The fans travelled to France in large numbers but the black-shirted hard core have proved a concern for UEFA.

Midfielder Lazslo Kleinheisler has been a lively figure.

Exceeding expectations, annoying Cristiano Ronaldo – and delighting neutrals in the process. Frustrated Portugal in their opening game, then should have held out against Hungary.

Keeper Hannes Halldorsson and centre-back Ragnar Sigurdsson have been the pick of the bunch so far.

Familiar problems have haunted the selecao, notably a lack of ruthlessness in front of goal.

There are bright new talents, notably William Carvalho and Joao Mario, but Cristiano Ronaldo has struggled to live up to his star billing. His attitude, more than his fitness, is the real worry: he appears more concerned about adding to his goal tally than producing the tricks and stepovers that have defined his career.

A major disappointment after being tipped by many (including Roy Hodgson in a World Soccer interview) as a surprise package. After defeat to Hungary, they held out against Portugal without ever threatening themselves, the experiment with playing David Alaba further forward failing to yield results.