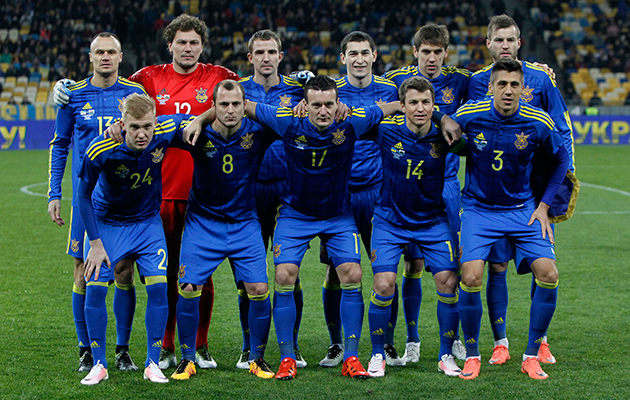 Striker Artem Kravets and experienced midfielder Oleh Gusev were left out by coach Mykhailo Fomenko, while Rubin Kazan defender Andriy Pylyavskyi missed out as Fomenko appeared to continue with his policy of ignoring Russia-based players.

Yevhen Seleznyov, who was initially left out while playing in Russia, was named in the final 23 after he moved back to Ukraine, joining Shakhtar.

Andriy Yarmolenko and Taras Stepanenko were both selected after they made up following an on-pitch argument.

Name: Denys BOYKO
Caps/goals: 4/0
Club: Besiktas (Tur)
Age|: 28 (29.01.88)
A graduate of Dynamo Kiev’s academy. Made his name with Dnipro by reaching the Final of the Europa League last season.

Andriy PYATOV
62/0
Shakhtar Donetsk
Age 31 (28.06.84)
Vastly experienced keeper, playing regularly in the Champions League. The only player to start every game in qualification.

Mykyta SHEVCHENKO
0/0
Shakhtar Donetsk
Age 23 (26.01.93)
Currently on loan at Zorya. Received his first call-up in November 2014 but still waiting for a first cap.

Artem FEDETSKIY
46/2
Dnipro
Age 31 (26.04.85)
Attacking right-back who will provide a constant stream of crosses. Key figure for Dnipro when they reached the Final of the Europa League last year.

Oleksandr KARAVAYEV
2/0
Shakhtar Donetsk
Age 24 (02.06.92)
Under-21 regular who has spent the last two seasons on loan at Zorha Luhansk. Surprise choice in final 23.

Yaroslav RAKITSKIY
38/4
Shakhtar Donetsk
Age 26 (03.08.89)
Powerful central-back who made his name as Dmytro Chygrynskiy’s replacement after he left for Barcelona. Played at Euro 2012. Never sings the  national anthem.

Serhiy RYBALKA
7/0
Dynamo Kiev
Age 26 (01.04.90)
Holding midfielder who tactically astute. Likes to take the ball from the defence and instigate attacks. His sister is a police officer.

Taras STEPANENKO
Shakhtar Donetsk
Age 26 (08.08.89)
Midfield workhorse who breaks up opposition attacks. Has made numerous appearances for Shakhtar in the Champions League.

Roman ZOZULYA
24/3
Dnipro
Age 26 (17.11.89)
Centre-forward with a fierce determination. Made donation to Ukrainian soldiers who suffered during the military conflict in the south east of the country.