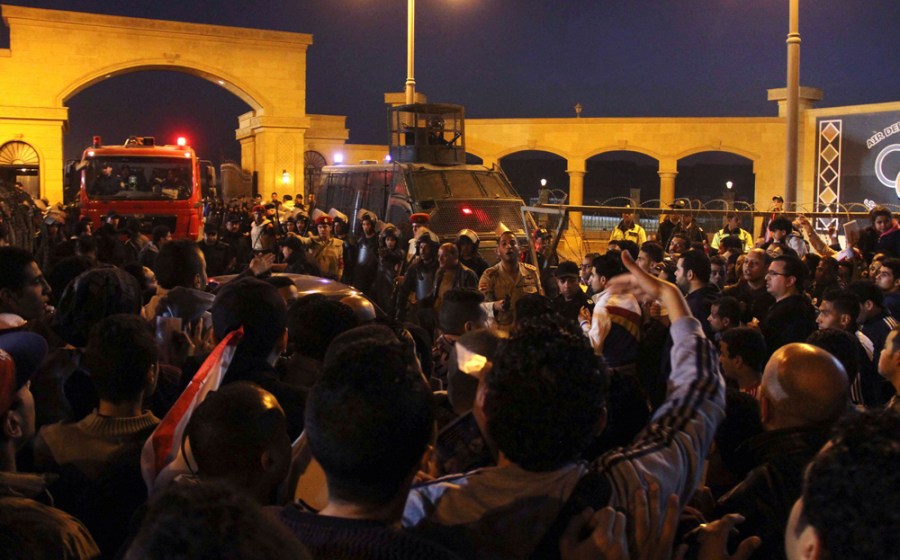 Mediawatch: Nick Bidwell looks at the recent coverage of football-related violence around the globe

What with many Zamalek fans losing their lives in Egypt, serious crowd trouble in Brazil, Germany and at the Equatorial Guinea-Ghana African Nations Cup semi-final, as well as the racist behaviour of certain Chelsea followers during a Champions League excursion to Paris, the news agenda in the first few weeks of 2015  has been largely driven by spectator woes and misconduct.
Coming just three years after 72 fans of leading Egyptian side, Al-Ahly met their death during a match in Port Said, football and society in this part of North Africa were once again plunged into despair early this month when 22 people were killed in a stampede and clashes between police and supporters of the Zamalek club prior to a match against ENPPI in Cairo and no media organisation went into more detail covering the story than the Al Jazeera TV channel.
Switfly making it their lead item, the Doha-based network meticulously looked at the tragedy from both sides of the fence – giving equal prominence to the Zamalek faithful’s claims of a security force ‘massacre’ and the Interior Ministry’s assertion that police only responded after supporters had tried to storm the stadium gates by force – probed the increasingly tense interface of Egyptian police and football fans, looked at the key role supporter groups played in the overthrow of president Hosni Mubarak in 2011 and asked the all-important question of whether the game there had a future.
Al Jazeera certainly were well-prepared for this type of incident. Just a couple of days previously, the station had aired an documentary on the growth in Egypt over the past few years of hardcore associations of ‘ultra’ fans and Alma Mosbah’s film really should be required viewing for anyone hoping to understand this transformation of dedicated soccer aficionados into major protest group.
“Football clubs in Egypt are more popular than political parties,” explained sociology professor, Saeed Sadek. “They have millions of supporters. When Al-Ahly or Zamalek play the streets are empty. When the revolution happened, the protestors needed experienced people to handle the security forces. The ultras always clashed with them in the stadiums. They knew how to fight with the police.”
Zamalek ultras, the White Knights, remain totally convinced that they were specifically targeted by the police outside the Air Defence stadium and to argue their case have extensively used social media, uploading photos and videos of the carnage and generally insisting that the violence was sparked by the authorities’ decision to only open one narrow, barbed-wire gate to let them in, the subsequent pushing and shoving leading to the police going in heavy with tear gas and the birdshot.
An alternative take on the disaster was to be found in Berlin’s “Tageszeitung”, where former Bayern Munich midfielder, Rainer Zobel, a long-time coach in Egypt with Al Ahly, ENPPI and El Gouna, did not hesitate to offer his own provocative views: “I don’t understand why the Zamalek fans weren’t kept in better check. The White Knights are especially volatile. They once stormed the headquarters of their own club. In the 1980s, Europe had a massive hooligan problem, but the lessons were learnt. Not in Egypt though. This is the mistake.”
Not that Egypt is the only global hot-spot for football-related violence. Brazil has been battling this particular plague for quite some time and following the X-rated scenes of a recent Sao Paulo derby featuring Palmeiras and Corinthians – fans of the former slugging it out with cops around the newly-built Allianz Parque and cliques of Corinthians supporters fighting amongst themselves at the ground – O Globo columnist, Emerson Goncalves felt compelled to cry enough is enough.
“This has nothing to do with football,” wrote Goncalves in a piece entitled “Barbarity and Savagery Grow Everywhere”. “This is killing the future of our clubs. How can we have families going to a stadium for a spectacle, full of hope of an exciting and pleasurable sporting competition? How can our club directors hope to generate good gate receipts in the future? How many children caught up in this turmoil, will be prepared to waste their afternoons and nights going to see a live game?”
For Goncalves, much of the blame lays with the incestuous, hand-in-glove relationship of boardroom and organised supporter groups, the latter receiving free or subsidised match tickets as a matter of course: “How can club officials continue to give such privileges to these groups ? They give or sell them tickets at friendly prices and allow them to dominate large areas of the stadium. Directors who call themselves members of organised fan bodies ultimately are engaging in slow suicide.
“In 1971, when we had a national population of around 100 million, we had average crowds of 15,500. Today there’s 200 million Brazilians and the average gate is more or less the same. The population doubles and the crowds stagnate. And all because of the same villain – violence.”