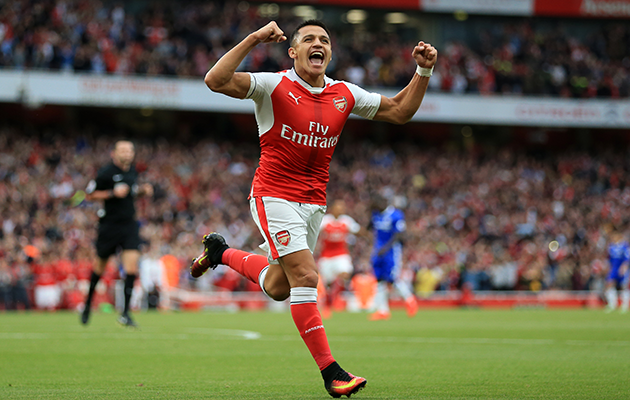 Alban Lafont, Toulouse
The 17-year-old keeper was outstanding as Toulouse pulled off a surprise 2-0 victory over champions Paris Saint-Germain. The result condemned PSG to their second defeat of the season and saw Toulouse leapfrog them into second place in Ligue 1, behind leaders Nice.

Jordan Morris, Seattle Sounders
The American youngster scored two goals in Sounders’ 4-2 win over LA Galaxy. That took his season tally to 12 goals, the most by an American “rookie” in MLS history. He is one of only five rookies who have scored 10 or more goals in a season.

Oliver Burke, RB Leipzig
The Scottish teenager scored after just five minutes of his full debut in the Bundesliga, as Leipzig drew 1-1 at Cologne.

Dario Benedetto, Boca Juniors
The forward, a summer signing from Club America, scored three times in the first half – one, a rocket from more than 30 yards – as Boca beat Quilmes 4-1 at La Bombonera. It was the first hat-trick scored by a Boca player since 2011.

Alexis Sanchez, Arsenal
The Chilean forward led Arsenal’s 3-0 humiliation of Chelsea, captalising on poor defending to open the scoring at the Emirates as Arsene Wenger celebrated 20 years at Arsenal.

Lukas Lerager, Zulte Waregem
The Danish midfielder scored twice as Zulte Waregem came from 2-0 down to win 3-2 at Mechelen and go four points clear at the top of the Belgian top flight.

William Jebor & Fabrice Ondama, Wydad Casablanca
After losing the first leg of the African Champions League semi-final 4-0 to Zamalek of Egypt, Wydad responded to last week’s sacking of coach John Toshack by almost pulling off one of the greatest comebacks ever. Liberian striker Jebor and Congolese forward Ondama each scored twice as the Moroccans took a 5-1 lead in the return leg. But with 10 minutes left, Zamalek scored on the counter attack through Nigerian Stanley Ohawuchi to win the tie 6-5 on aggregate. They will now play Mamelodi Sundowns of South Africa in the Final.