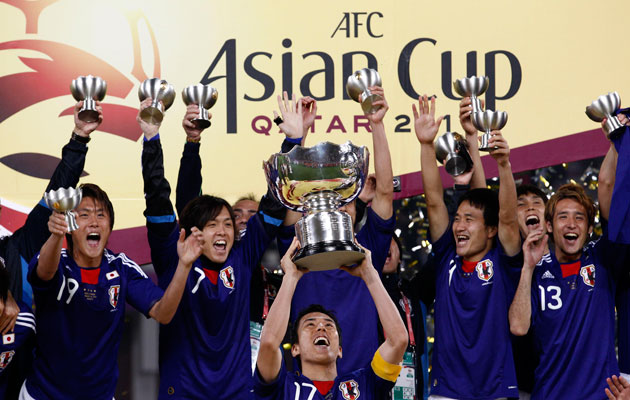 Preview of the 2015 Asian Cup finals.

Group A
Australia
The finalists in 2011 are hoping to go one better on home soil. Form is a serious worry, but home advantage will go a long way – especially with Tim Cahill still a serious threat.

Coach
Ange Postecoglou was greeted as the new hope of Aussie football in 2013 but poor results have fans nervous. Still has no alternative to Cahill’s goals or sorted out the backline.

Key Player
Mile Jedinak has been great for Crystal Palace but the all-action midfielder has sometimes struggled to replicate that form for the national team.

South Korea
Haven’t ruled the continental roost since 1960 and are determined to end that drought while putting a dismal World Cup to bed. Still going through transition under a new coach but have the talent to win it.

Coach
Uli Stielike has vowed to produce winning football and seems to have found the old aggression, pace and intensity. Now to sort the defence.

Key Player
Son Heung-min has been the best Asian player of 2014. Never quite replicated his explosive Bayer Leverkusen form for his country, but if he can, Korea will go far.

Oman
Yet to really make their mark outside West Asia but look well-organised and conceded just one goal in qualification. Goalscoring and self-belief could be the problem when facing Korea and Australia.

Coach
Appointed in 2011, Paul Le Guen has turned the team into a tight unit that has been taking on tough opposition in the build-up.

Key Player
Ali Al Habsiis perhaps the best goalkeeper in Asia, and the former Bolton and Wigan shotstopper remains vital to a team that pins its hopes on not conceding.

Kuwait
Getting out of the group would be a major success for a team that plays tidy football but lacks the cutting edge to really hurt the bigger boys.

Coach
The former Tunisian midfielder Nabil Maaloul was appointed in December and does not have much time. Last seen coaching in Qatar, he has little experience outside West Asia.

Key Player
Bader Al Mutawa is still only 29 but seems older thanks to seemingly being around forever. The attacking midfielder pulls the strings, and was linked to Malaga and Nottingham Forest a few years ago.

Saudi Arabia
The 2011 Asian Cup Final was only the second since 1980 not to feature the Saudis, who have some good young players coming through.

Coach
Al Ahli’s Romanian boss Cosmin Olaroiu took a short break from his club job to replace Juan Lopez Caro, who was dismissed six weeks before the start of the tournament.

Key Player
Nasser Al Shamrani scored 10 goals in the Asian Champions League but lost in the Final and was then caught spitting at an opponent. Named Asian Player of the Year hours before being banned for eight games.

China
Desperate for success with a sole World Cup appearance fading into history. Expectations are low but the Guangzhou Evergrande contingent adds stability.

Coach
French boss Alain Perrin was an underwhelming appointment, especially as most wanted Marcello Lippi, but he has been coaxing some decent performances from a younger-looking team.

Key Player
Zheng Zhi provides a steadying influence and the 2013 Asian player of the year is a charismatic and intelligent leader in midfield.

Uzbekistan
Asia’s nearly men made the quarter-finals in 2007 and the semis in 2011 but never quite managed to make the step to the next level. There is a feeling that, perhaps, the team is passing their peak and success in Australia would be quite a swansong.

Coach
Mirdjalal Kasimov was one of his country’s best-ever players and is now in his second spell as national boss. The first did not end well.

Key Player
This is surely the last chance for the two-time Asian Player of the Year and talented playmaker Server Djeparov to make global waves.

North Korea
Things are going well but this tournament may come a little too early for a talented new generation. Even so, a solid and well-drilled team has the potential to do well.

Coach
Yun Jong-su has been around the national team for some years, but due to comments made after the Asian Games in September he will be banned from the dressing room and dugout at the Asian Cup.

Key Player
Jong Il-gwan (above) is the goalscoring hope and the 2010 Young Asian Player of the Year is maturing into a dangerous all-round striker.

Iran
Looking for a first continental title since 1976 and, with an experienced team still fresh after the World Cup, they will be tough to beat. Solid at the back, their chances depend on finding their goalscoring touch.

Coach
Carlos Queiroz has the experience
to deliver the title but it remains to be seen whether he can produce a more creative and aggressive team.

Key Player
Fleet-footed forward Reza Ghoochannejhad  is Iran’s best chance of goals, especially on the counter-attack. When in the mood, he’s direct and decisive.

Bahrain
The men from Manama are having all kinds of problems and even finished below Yemen in the recent Gulf Cup, ending up goalless and coachless. There is talent but confidence is at rock bottom.

Coach
Assistant Marjan Eid has made the step up to become the national side’s third coach in four months after Adnan Hamad was fired. He has a big job on his hands.

Key Player
Saudi-based striker Ismail Abdul-latif has been Bahrain’s main goal threat in recent years but he can’t do it without the service.

Qatar
Asia’s form team, they won the West Asian Cup in January 2014 and the tougher Gulf Cup in November. Increasingly creative in attack and solid at the back, a lack of belief has been a problem in the past.

Coach
Djamel Belmadi was a surprise choice early this year, but the 38-year-old Algerian has infused belief and a cutting edge into the team.

Key Player
Khalfan Ibrahim is still just 26 and the winger has gone from strength to strength since being named Asian Player of the Year in 2006. Can make goals out of nothing.

UAE
On their day, the best team to watch in West Asia and are threatening to break into the top tier of Asian football. The players that impressed at the 2012 Olympics are now approaching their peak.

Coach
Local tactician Mahdi Ali has risen through the age levels with his players and knows them well. Has built a team that play good football.

Key Player
Omar Abdulrahman is the hottest property on the continent. The playmaker makes the team tick and plenty more besides. This is a real chance to show what he can do.

Japan
Determined to show that the 2014 World Cup was a blip and take a fifth title in seven tournaments. The European-based players are playing well, although the defence still looks a little vulnerable.

Coach
Not all thought the Mexican, Javier Aguirre, was the right man and not all have been won over. Experiments didn’t work so well but a recall of the old guard brought a return to form.

Key Player
Keisuke Honda was out of sorts in June but has made up for it since with Milan. At his best, he makes the others step up too.

Jordan
One of Asia’s most improved teams, even if that is mostly down to impressive home form. Like to keep things tight at the back and hit on the counter-attack. May not have the firepower to get too far.

Coach
Ray Wilkins was something of a surprise appointment in September and he has had little time to stamp his authority. No wins in his first five games and just two goals.

Key Player
In a team that does not score too many, creative talent Odel Al Saify is a valued and experienced winger who whips in a wicked cross.

Iraq
The 2007 champions are the most unpredictable side in Asia. There is no shortage of talent but it does not always show itself and they finished in last place in their Gulf Cup group.

Coach
Former international defender Radhi Shenaishil was given permission by club side Qatar SC to take charge for the finals. He previously coached Iraq’s national side in 2009.

Key Player
Just 18 but already with plenty of experience, midfielder Humam Tariq has the vision to see things others do not and the skill to make it happen. Destined for big things.

Palestine
It is always a little patronising to say that a team is just happy to be here, but in Palestine’s case it really is true. Reached a first-ever Asian Cup by defeating Philippines in the AFC Challenge Cup.

Coach
Jamal Mahmoud has done much to foster the rise of Palestine but resigned in September leaving Saeb Jendeya in temporary charge. His lack of experience is a worry.

Key Player
Tricky striker Ashraf Nu’man got the historic goal against Philippines to book this Australia trip. Has the big-game temperament.