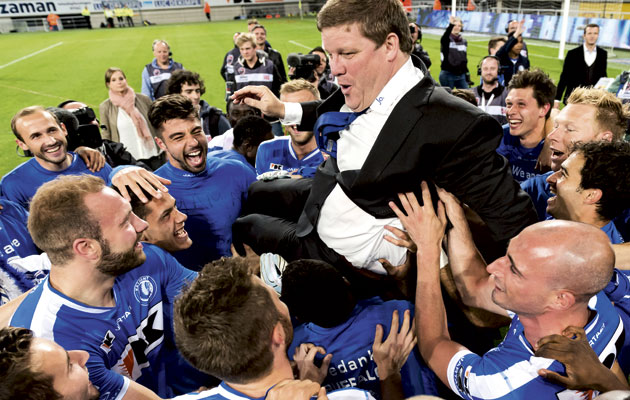 The annual Gent Festival attracts two million visitors and lasts for 10 days. After the city’s football club won the title for the first time, the celebrations lasted for a similar period. On the Sunday evening a few days after they had clinched the league crown with a 2-0 victory over Standard, an estimated 125,000 fans watched their heroes parade the trophy along the Leie river on a flotilla of boats.

Gent had not been expected to mount a challenge and their unexpected success was primarily down to one man: coach Hein Vanhaezebrouck.

Little-known outside his homeland, Vanhaezebrouck was born in Kortrijk but his family moved to Lauwe, not far from the border with France, when he was six months old. And he was expected to follow in the footsteps of his father, who was a headmaster, until football beckoned.

On the field, his career was far from spectacular. He played as a libero with several Flemish clubs, although he did win the third-division title with KRC Harelbeke in 1990.

He got his first coaching post in 2000, as an assistant at Lokeren, and then came his big break when appointed boss of Kortrijk in 2006.

His achievements at Kortrijk, with an annual budget of just ¤8million, were to make his reputation. In seven seasons, Vanhaezebrouck won the second division title and, following an unhappy interlude
at Genk, he returned to Kortrijk and took them to the Belgian Cup Final in 2012.

Appointed at Gent at the beginning of this season, he was the club’s sixth coach in 18 months. He cleared out unwanted players, brought in a few new faces and gave prominent roles to some of those
he had worked with at Kortrijk. These included Israeli centre-back Rami Gershon, much-travelled midfielder

Sven Kums, whom he appointed captain, and youngsters Benito Raman and Brecht Dejaegere. Vanhaezebrouck is a great motivator, often getting the most out of players who have struggled elsewhere. He’s also an astute tactician, favouring a 3-5-2 formation that requires his players to be physically fit and willing to follow instructions. The 51-year-old likes his teams to play football from the back and continually create problems for the opposition.

In a sense, Vanhaezebrouck’s teams have always played in the same way – except that now he has a better quality squad. Not that this title-winning team has recognised stars. Goalkeeper Matz Sels and striker Laurent Depoitre both received honourable mentions in the end-of-season Players’ Player of the Year awards but they are not household names. Then there’s Nigerian winger Moses Simon, signed in January from Slovakian side Trencin as an unknown and who is now on the radar of several bigger clubs.

Although Gent are one of Belgium’s “Big Five”, with a budget of ¤25m, they are some way down the pecking order, behind Anderlecht, Club Brugge, Standard and Genk.

However, two events have shaken things up. The first was in 2013 when Gent inaugurated their new ground. The Ghelamco Arena – which houses a Michelin star restaurant – is the only state-of-the-art stadium in Belgium. The second, and perhaps equally important, was the arrival of their coach.

During the regular season, Vanhaezebrouck kept Gent in the leading pack, but the league format places enormous importance on the play-offs, and Club Brugge – who topped the table by four points – saw their lead over Anderlecht and Gent halved overnight.

During the play-offs, Michel Preud’homme’s Club Brugge found the strain of playing on three fronts – league, Belgian Cup and Europa League – too much, while Anderlecht and Standard flattered to deceive.

And when those two played out a disappointing draw in Brussels, the spotlight switched to Gent and Vanhaezebrouck. His team didn’t choke and significantly, after the title win, he made special mention of sports psychologist Eva Maenhout who joined at the turn of the year.

Having lost only one game in 2015 – and that in the 92nd minute – Gent’s championship success was richly deserved in a season where coaches have mattered more than players.

Preud’homme did an excellent job at Club Brugge, but having to play 65 games – more than any other team in Europe – saw his team ran out of gas. Anderlecht’s Besnik Hasi did all he could to repeat his title win of the previous season but he had problems with a squad containing several inflated egos. In the south, Charleroi’s Felice Mazzu worked wonders with a team that had been many people’s tip for relegation, while Standard employed three coaches and lurched from crisis to crisis.

But in the end it was Vanhaezebrouck who topped the lot and now Gent fans are demanding a statue in his honour.

The man himself does not seem in favour, however, saying with a smile: “They can be knocked down too easily”.

PLAYER OF THE SEASON
Mat Ryan
(Club Brugge)
The 23-year-old Australian keeper was in great form for his side during the Cup Final, was excellent in the Europa League and proved himself to be consistently good throughout the league campaign.

NEWCOMER OF THE SEASON
Neeskens Kebano
(Charleroi)
After failing at Paris Saint-Germain, the midfielder blossomed under Felice Mazzu.

CUP WINNERS
Club Brugge won their first silverware for eight years with a 2-1 victory over Anderlecht.

COACH OF THE SEASON
Hein Vanhaezebrouck
(Gent)
Turned a squad without stars into title winners.

RELEGATED
Lierse finished last in the league but it took them another 11 play-off games before they went down with Cercle Brugge.

PROMOTED
Second Division champions Sint-Truiden return to the top flight once again, having been relegated in 2012. They will be joined by Leuven, who won the promotion play-off – ahead of Eupen, Lierse and Lommel United – are back just one season after they went down.