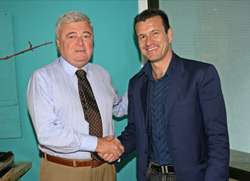 Between the game against the Republic of Ireland at the start of March and the call up of the World Cup squad on May 11, Dunga has declined to give any interviews – his way of dealing with the speculation and the campaign for the inclusion of Ronaldinho and, more recently, Neymar. Just before the vow of silence came into operation, he spoke to Brazil’s SporTV. These are some of the things he said…

On his current position:
“As a player it was my dream to play for Brazil, to hear the national anthem, walk the same path as the champions, climb those steps to be awarded the trophy, but I never imagined that I’d be coach of the national team.”

On the importance of the team he captained to triumph at USA 94:
“That team had something fundamental; it was a group that taught the country how to win. We went without for 24 years, with exceptional players, but we couldn’t take that extra step. That generation did it, showing that work comes first.”

On how he deals with the pressure:
“When I was young my dream was to work in agriculture. I used to cut off branches from gardens, get a can of olive oil and plant them. I had green fingers, because everything grew. My house was always full of flowers. I like to work the soil, I like the smell of it. At home, whenever I can, I’m out in the garden. It’s a kind of therapy. When I’m stressed I go out with the plants – my family realise and leave me to it. The plants suffer…I go there and start cutting everything!”

Asked if Brazil will win the World Cup:
“Yes. We’re going to work, to do everything possible to achieve our objective. Our supporters should be aware that we’ve been building for this for three-and-a-half years. When we started many didn’t believe in us, but we’re going to do it in the World Cup.”

On the key rivals:
“England, with Capello, are going to be strong. They have very good players, competitive with their clubs, who haven’t been able to take that into the national team. Spain are doing well. There’s a few others as well. Argentina won’t be like they were in qualification, they’ll be much better. And Italy – all the traditional powers.”