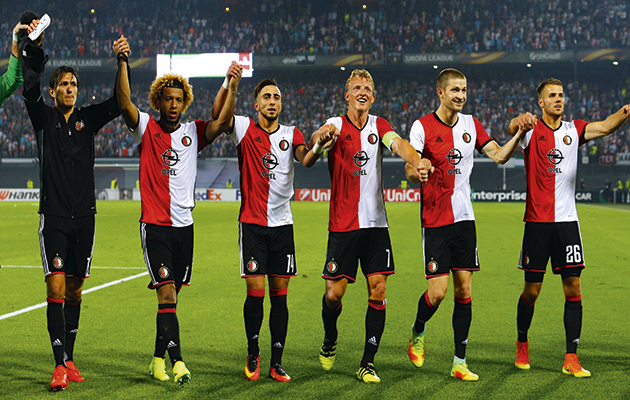 “You aren’t a Feyenoord fan for fun,” Gerard Cox always says. And the 76-year-old Rotterdam actor knows what he is talking about. On the south bank of the river Maas there have been many more moments of disappointment than glory. But, at the same time, the expectations of Holland’s most loyal fan base are irrationally sky high at the start of every new season.

True, Feyenoord were the last Dutch club to gain a European prize, winning the UEFA Cup in 2002, but they have been waiting for their 15th national title since 1999. As a comparison, rivals Ajax (a total of 33) and PSV (23) have been champions six and nine times respectively during this period of drought.

But this time it might be different. Feyenoord have been on top of the Eredivisie since day one of the 2016-17 season and have a much better balanced squad than in recent times.

The secret behind the Rotterdam club’s success this term has been an ability to keep their squad together over the summer. And they not only have a solid side, they also have the necessary knowhow.

Players such as Eljero Elia and Dirk Kuyt have World Cup experience under their belts, while 31-year-old midfielder Karim
El Ahmadi is playing the best football of his career. Industrious midfielders Jens Toornstra and Tonny Vilhena have rediscovered their best form, while overlapping right-back Rick Karsdorp recently made his international debut for Holland.

On top of that, technical director Martin Van Geel pulled off some shrewd transfers, especially up front. Steven Berghuis, a winger on loan from Watford, and striker Nicolai Jorgensen, signed from Copenhagen, have been valuable additions, giving the team more attacking options.

The strength of the squad is such that a serious achilles injury to goalkeeper Kenneth Vermeer has been no more than a minor hiccup. By signing former Liverpool keeper Brad Jones they have a reliable replacement, who may keep his place even when Vermeer is back.

Even rookie coach Giovanni Van Bronckhorst has learned a trick or two. Last year Feyenoord threw away any title chance they had with a run of nine games without a win, including seven defeats, right after the winter break. In came veteran Dick Advocaat to give the former Arsenal, Rangers and Barcelona midfielder some much needed advice, and this year Van Bronckhorst has led his side so well that the board have renewed his contract.

But the big question is, can Feyenoord remain on top?

Of course, a run like last term’s would be fatal, but even a handful of defeats might be something to worry about. Although Ajax had a miserable start to the season, and PSV are out of form and struggling against the minnows, neither are too far behind.

And then there is the concern that the African Nations Cup in January could also put things in jeopardy. Feyenoord can’t afford to lose their main man El Ahmadi to Morocco as replacements Marko Vejinovic and Renato Tapia have not convinced. However, Ajax will face the same problem with Moroccan midfielder Hakim Ziyech, whose late transfer from Twente is the main reason that the Amsterdam club
are back on track.

So it remains to be seen whether player absences, a dip of form or defensive errors – Feyenoord’s major weakness – could yet decide the championship.

In fact, it appears that the movers and shakers at Feyenoord feel it is safer to put their money on title wins in the distant future. By 2022, a new 63,000-capacity stadium should have been built, designed by famous architect Rem Koolhaas. The new football temple will cost €356million and will be situated near to De Kuip and partly built in the river Maas – if the city council agree, that is. Two previous plans and the fans’ favourite option to renovate De Kuip all fell through because of lack of cash.

This time, the stadium is part of a “Feyenoord City” plan, consisting of houses, restaurants, hotels, a cinema and sports facilities. And many expect this investment to help Feyenoord catch up with PSV and Ajax.

“The squad’s budget will rise because a part of the revenue from pop concerts will go to the club,” chairman Gerard Hoetmer told Algemeen Dagblad. “So indirectly U2 could contribute to a new title.”

Let’s hope for Cox and his fellow devotees that Feyenoord finally have found what they are looking for.