Just three years ago, the status of Sporting Clube de Portugal, which had once proudly competed toe-to-toe with Europe’s finest, was at an all-time low.

As Porto and Benfica swept up the domestic honours, the standing and credibility of Sporting was being visibly whittled away.

Sporting were simply unable to compete with their more powerful rivals. The team plunged to an unthinkable seventh-place finish in 2012-13 and years of boardroom mismanagement had put the financial viability of the entire institution at risk.

Then, on March 23, 2013 Bruno De Carvalho was elected as the club’s new president. It is impossible to disassociate a sea change at Sporting with the arrival of Carvalho at the helm.

He immediately set about attacking every individual and entity he perceivedas preventing Sporting from recapturing its past glories. And he hasn’t stopped since. His fiercely confrontational methods are not pretty. One tirade against Porto president Pinto Da Costa insinuated he was going senile; accusations of Benfica bribing match officials have been commonplace; and he has instigated a one-man war against football investment funds and agents. Needless to say, Carvalho has collected numerous and deep-seated enemies along the way.

But there is no doubt he has transformed the club, both on and off the pitch. Under the onda verde (“green tide”) slogan, the fan base has been re-energised, the club’s talented young players are no longer wooed away at cut-price fees by unscrupulous agents, financial stability has been restored and, most important of all, Sporting are right back in the mix for trophies.

The sensational appointment of Jorge Jesus, the most successful coach in Portugal for the past decade, snatched from cross-town rivals Benfica, exemplified Carvalho’s audacity in his quest to take Sporting back to the top.

An ex-Sporting player, as was his father, Jesus has strong emotional ties to the club. A short film shown on the giant screens at the stadium on the day he was presented, with footage of his father’s playing days, almost reduced him to tears. “I can promise you that, from now onwards, Sporting will be competing for all the major honours in Portugal,” he said.

The apparent match made in heaven has served to further galvanise the supporters and bring real belief that something special is happening at the club.

That enthusiasm only grew as Sporting began the season at a canter, beating arch-rivals Benfica three times and seeing off Porto to spend the vast majority of the campaign at the table summit. However, Benfica have since come back strongly, setting up a thrilling season finale.

Whether it will end in triumph for the green half of Lisbon only time will tell. 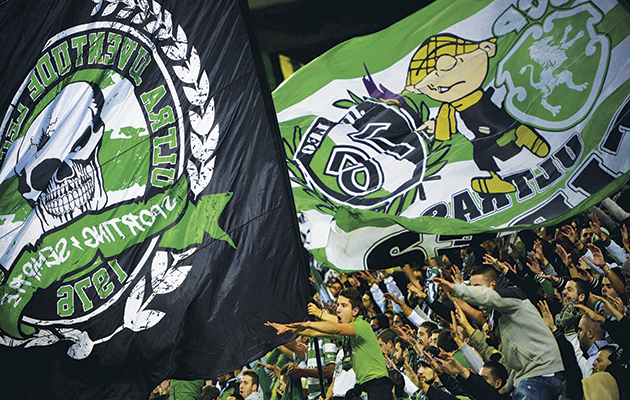 Support…Sporting fans ahead of the big Lisbon clash with Benfica

But there is an inescapable feeling that Carvalho will not stop his Sporting crusade until something gives.

Will his frenzied attempts to guarantee the pre-eminence of his club blow up in smoke? Or are we about to witness a definitive shift in the power structure of Portuguese football?

It would not be the first time it has happened. A brief overview of the history of Portuguese football reveals three epochs of hegemony, one for each of the country’s traditional “Big Three”.

Sporting were the first of the triumvirate to achieve a sustained period of absolute dominance, the Alvalade club ruling supreme in the 1940s and 1950s, particularly in the years straddling the two decades, when they lifted the Portuguese championship seven times in eight seasons, fired by the legendary quintet of attacking players known as the cinco violinos (‘five violins”).

Jesus Correia, Manuel Vasques, Albano Pereira, Jose Travassos and goalscorer extraordinaire Fernando Peyroteo changed the history of Sporting and the face of Portuguese football, their relentless attacking and telepathic combination play making the Lions an irresistible force. Peyroteo’s statistics especially make for eye-watering reading, as he scored a barely believable 543 goals in 334 games during his career.

From the moment Peyroteo, the first “violinist”, made his debut to the time the last of the magnificent five, Travassos, hung up his boots, the Green and Whites won 10 championships and five Portuguese Cups. Playing together, the five did not lose a single game against Benfica, lost only once to Porto and were unbeaten at home. The club’s annual pre-season tournament is named the Cinco Violinos in homage to the mythical fivesome.

The glory years for Sporting ended when a Eusebio-inspired Benfica wrested the reins of power from their neighbours in the 1960s and 1970s, before Porto, under the trophy-laden, controversial and ongoing presidency of Da Costa exerted their stranglehold on the domestic game.

Porto’s three-decade long empire of ascendency is in apparent decline as age starts to catch up with Da Costa, paving the way for a fascinating three-way tussle for supremacy.

Since 1970 Sporting have lifted the title only five times, which shows the enormity of the mission Carvalho has tasked himself with in bringing a sustained period of success to the Alvalade.

Not that the intervening years have been all doom and gloom. While collective triumphs were few and far between, Sporting earned worldwide acclaim for producing some of the greatest talents to grace the game, particularly when it comes to wingers. Paulo Futre, Luis Figo and Cristiano Ronaldo are just three examples of footballers nurtured through the club’s ranks who went on to achieve global stardom.

And the conveyor belt of outstanding talent flowing from the club’s Alcochete academy, east of Lisbon on the other side of the River Tejo, shows no signs of slowing down. Sporting’s success this season is built around the home-grown midfield trio of Adrien, William Carvalho and Joao Mario. It is not uncommon, even for the newly competitive Sporting, to line up with five players who came through the ranks.

What differs is that in the past the club’s precociously talented prospects were sold too quickly and at too young an age to bring either sporting success or meaningful financial gain. In contrast, the new regime has striven to protect their young pearls by routinely inserting buyout clauses of upwards of €45million in the contracts of their biggest assets, while complementing the local talent with experienced, proven and – by Sporting’s standards – costly reinforcements.

But the contribution to the current vibrancy made by Jorge Jesus cannot be underestimated. As at Benfica, the coach has his team playing cohesive and easy-on-the-eye attacking football, while on an individual basis several players are performing at levels few believed they were capable of attaining.

Striker Islam Slimani is a case in point. Bought for €300,000 less than three years ago, Sporting turned down six bids of up to €24million for the Algerian in the January transfer window.

Significantly, and in contrast to a succession of players of the recent past wanting away for their big pay day, Slimani is in no rush to leave Sporting. “Jorge Jesus is a world-class coach – and I’m not exaggerating,” the burly striker recently said.

“Tactically he’s a genius. It’s an absolute pleasure to work with him. He makes us progress every day. It was the best decision of my career to sign for Sporting.”

With the potent mix of fierce ambition, confidence and sense of entitlement coursing through the club’s playing staff, supporters and hierarchy, there is every chance Sporting’s woeful start to the new millennium will be followed by something very different.

A good example of the club’s newfound self-esteem is the “NOT Sporting Lisbon” campaign, instigated on the social networks and endorsed by the club. In the not-too-distant past Sporting would have been grateful for any mention in the international press, even if erroneously referred to as “Sporting Lisbon”. Not so nowadays. The club has embraced the fight to have its name correctly reported, which inherently emphasises its national dimension: Sporting Clube de Portugal.

The key figures at Sporting

The Coach
Jorge Jesus
The swagger, energy and no little success he installs in teams goes some way to explaining the huge dollops of arrogance that typify each media conference and interview with this charismatic coach.
Convinced he is “the best in the world”, Jesus made it to the top of the Portuguese game the hard way, collecting 12 clubs on his managerial CV before finally arriving at Benfica. There, he won the title three times in six seasons (Benfica had won just one in the previous 15 years) and reached two European finals, playing a breathless brand of relentlessly attacking football.

So it shook the domestic game to the core when he walked out on the Eagles for local rivals Sporting last summer. Early signs are that he took his magic with him.

President
Bruno de Carvalho
Hard-headed, brazen and lashing out at all perceived obstacles to Sporting’s success, the president has collected bitter enemies in his three years at the helm, but his unflinching focus on bringing back the glory days of yesteryear has galvanised the club.

Club Captain
Adrien Silva
French-born player who has been at the club since he was 12 and has finally realised his full potential. The club captain’s calm, albeit determined, demeanour in interviews contrasts sharply on the pitch where that calmness is nowhere to be seen. A vigorous competitor always in the heat of the battle.

Public Relations
Augusto Inacio
Public relations manager and ex-Sporting coach who led the club to the 2000 title after an 18-year barren spell. He has now settled his previous differences with Jorge Jesus.

Sid Lowe’s Notes from Spain: a great week for Spain and a fantastic one for Madrid

Tim Vickery’s Notes from South America: Panama Papers highlight how much clubs have missed out on