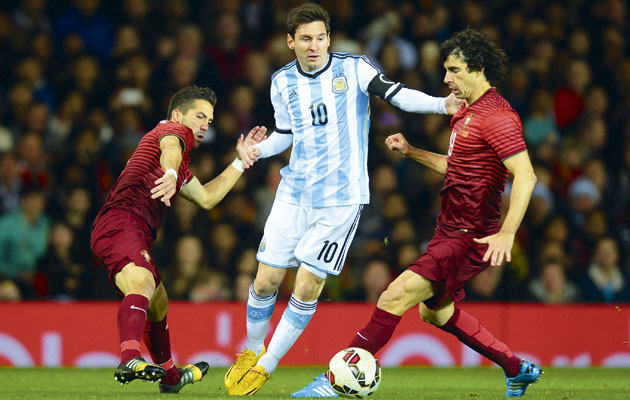 Argentina are without a senior trophy since the 1993 Copa, and as coach Gerardo Martino points out: “This group of players cannot finish their cycle with the national team without winning a title.”

Yet at the same time Martino also feels “the Copa America can’t be something definitive in the mind of the players, because the World Cup qualifiers are coming straight afterwards”. He is keen
to stress “we’re looking to consolidate as a team, to develop our idea of play”.

In truth, Martino’s side is not so different to that of his predecessor, Alejandro Sabella. Which means he faces the same problem: a lack of defensive pace.

During last year’s World Cup this was not so apparent. Injuries to the attacking stars caused Sabella to rethink his team during the course of the competition and settle on a more cautious approach with a deeper defensive line. Once Martino took charge he soon ran into the same slow back-line problem. A few new centre-backs have subsequently been examined and discarded, and the injury to Mateo Musacchio of Villarreal is a real blow.

At the other end, there remains an embarrassment of attacking riches – all the more now with the recall of Carlos Tevez, who, it appeared, had not been on good terms with Lionel Messi.

If Argentina’s strikers can stay fit and fire together, then the long wait for a lap of honour may be coming to an end.

Like previous national coach Alejandro Sabella, Gerardo Martino’s base idea for his Argentina side is a 4-3-3 set-up. The main difference, however, is that he prefers to see Angel Di Maria in the attacking line-up, rather than among the midfield trio.

This means that Sergio Aguero and Gonzalo Higuain – and now Carlos Tevez – are competing for one place, while the introduction of an extra all-round midfielder is an attempt to give the team more balance.

An alternative is a switch to 4-2-3-1 and have one of the midfielders replaced by a playmaker, essentially reversing the direction of the central midfield triangle.

Nahuel GUZMAN
Age 29 (10.02.86)
Tigres (Mex)
Nominally the team’s second-choice keeper but he is putting increasing pressure on Sergio Romero. In good club form and made his name under Martino at Newell’s Old Boys.

Nicolas OTAMENDI
Age 27 (12.02.88)
Valencia (Spa)
Played out of position at right-back in the 2010 World Cup and only recently recalled on the back of a good club season. Has the chance to establish himself in the centre of the defence.

Javier MASCHERANO
Age 30 (08.06.84)
Barcelona (Spa)
A central midfielder who can also drop back between the central defenders. Firm tackling and a decent range of passing makes him vital to the side.

Lionel MESSI
Age 27 (24.06.87)
Barcelona (Spa)
Approaching 100 caps but is still waiting for his first senior title at international level. Could this be the moment or might another long club season take its toll?

Sergio AGUERO
Age 26 (02.06.88)
Manchester City (Eng)
Scored plenty of goals but still feels he has yet to show his best form for his country. An excellent rapport with Messi should ensure that, if fit, he’ll get the nod as centre-forward.

Gerardo MARTINO
Age 52 (20.11.62)
The logical choice to succeed Sabella after the World Cup. His coaching CV includes Barcelona, Paraguay’s national team and Newell’s Old Boys – where he had previously starred as an elegant midfielder.