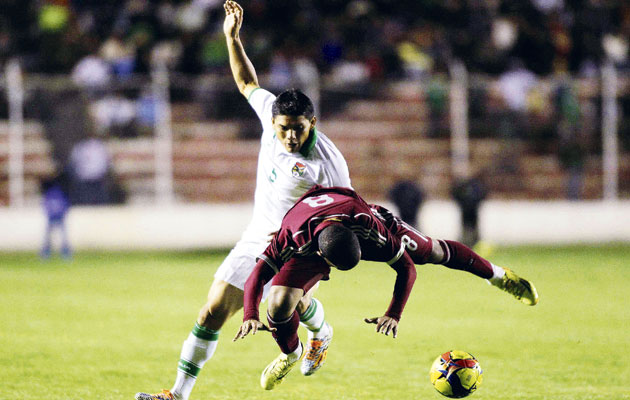 I’m aiming to do what Marcelo Bielsa did with Chile,” said Mauricio Soria, raising the bar very high for himself on his appointment as Bolivia coach in January. “I want to play attacking football. I don’t want to defend as much as we’ve normally done. We’ve lost many times playing that way, so let’s attack.”

Such bold words come against a backdrop of administrative confusion as Bolivia’s three previous internationals were overseen by three different coaches.

In September, veteran Spanish coach Xabier Azkargorta was put in caretaker command. Soria then took charge in October, for a creditable 2-2 draw in Chile, and was all set to be named permanent boss before running into political problems. While coaching the Blooming club he appeared to make disparaging remarks about the people of the city of Potosi, and in the ensuing storm Nestor Clausen took charge of November’s 3-2 win over Venezuela.

Having weathered the storm, Soria was appointed this year, but the problems had not yet ended and Bolivia pulled out of a friendly in Nigeria at the end of March. Soria did hold some training sessions, but that is of little use as Copa preparation.

On the plus side, Bolivian club sides’ displays in the Libertadores Cup are much improved in the last two years, leading to optimism that this might filter through to the national team. However, the likely absence of captain Ronald Raldes through injury is a huge blow.

“We need to take into account the characteristics of the opponent,” says Mauricio Soria, “because we can’t restrict ourselves to just one way of playing.”

In October’s 2-2 draw away to Chile, when only a last-minute penalty prevented a famous victory, he went with a 4-2-3-1 formation but felt his charges fell a little short of his aim “to have control of the ball and to arrive with frequency at the opposing goal”.

However, his side showed an attacking purpose and an occasional threat down the flanks which they will look to reproduce on their return to Chilean soil.

Romel QUINONEZ
Age 22 (25.06.92)
Bolivar
Confident goalkeeper who came to the fore in his club’s surprise run to the semi-finals of last year’s Libertadores Cup. Not always as impressive this year, but has plenty of potential.

Alejandro CHUMACERO
Age 24 (22.04.91)
The Strongest
A graduate from the 2011 under-20 side who adds dynamism to the midfield. Back home after an unsuccessful year with Sport Recife in Brazil.

Pablo ESCOBAR
Age 36 (23.02.79)
The Strongest
The naturalised Paraguayan playmaker has made himself available again after a self-imposed exile since scoring twice against the land of his birth in a World Cup qualifier in 2012.

Juan Carlos ARCE
Age 30 (10.04.85)
Bolivar
A product of the country’s Academia Tahuici, the much-travelled winger has been plagued by injuries of late. If fit, he could be crucial to Soria’s aim of raiding down the flanks.

Marcelo MARTINS MORENO
Age 27 (18.06.87)
Changchun Yatai (Chn)
Bolivian-born son
of a former Brazilian midfielder. Target man who has not always lived up to his big-star billing and could face pressure from Carlos Saucedo.

Mauricio SORIA
Age 48 (01.06.66)
Former international goalkeeper, with 23 caps, who in a nine-year coaching career has won the Bolivian title with three different clubs. Eventually took over the national side in January.