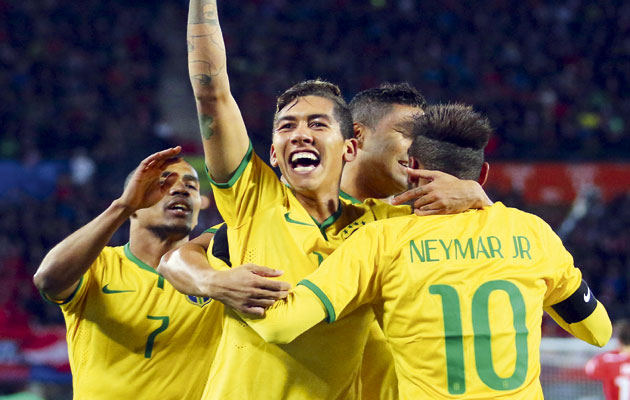 A run of eight successive wins by Dunga’s side since a humiliating World Cup exit has caused some to trumpet the return of Brazil; others prefer to recall that predecessor Luiz Felipe Scolari’s men went into last summer’s tournament on a roll of nine consecutive victories.

The Copa is Brazil’s first real test since last year’s debacle. Dunga is keen to stress  the priority is whipping a side into shape for the World Cup qualifiers, but he knows what is at stake: one slip and all those friendly wins will be instantly forgotten.

The coach was by no means an obvious or a popular choice to return to the position he held in the four years up to the 2010 World Cup, and his brand of snarling pragmatism will only be praised, or even tolerated, as long as it is achieving results.

On the positive side, he can count on Neymar, who is increasingly maturing into a genuinely world-class striker. But Dunga can also point to his team’s most impressive performance so far: a win in France in March achieved without much of a contribution from Neymar. It was a moment when Brazil demonstrated, perhaps even to themselves, that they are not just a one-man team.

Then there is perhaps the most positive news of all: it will be several decades before Brazil has to cope with the pressure of playing a World Cup at home again.

The principal change from Luiz Felipe Scolari’s side is the replacement of a target man with a more mobile centre-forward. There has also been an effort to keep the team more compact. This enables a slight switch from the recent basic formation of 4-2-3-1.

With Neymar free to roam across the line, it starts to look more like a 4-4-2, although Chelsea’s Oscar misses out through injury.

Against France in March the team bore a slight resemblance to the World Cup-winning side of 1994, when Romario and Bebeto were up front, with Dunga pulling strings in midfield.

JEFFERSON
Age 32 (02.01.83)
Botafogo
One-time clown’s assistant who now has the serious task of being Brazil’s first-
choice goalkeeper – despite his club being in the second division – if he recovers from a knee injury in time.

DANILO
Age 23 (15.07.91)
Porto (Por)
Has established himself as the post-World Cup right-back. Not as flash as some of his predecessors, but talented and versatile. He will join Real Madrid next term for ¤31.5million.

MIRANDA
Age 30 (07.09.84)
Atletico Madrid (Spa)
Centre-back who was a baffling omission from the World Cup squad. Immediately installed by Dunga, his no-nonsense defending has been an important part of the side.

NEYMAR
Age 23 (05.02.92)
Barcelona (Spa)
Made captain by Dunga and is relishing the responsibility. Brazil’s talisman is fifth on their list of all-time scorers, although most of his goals so far have come in friendlies.

Roberto FIRMINO
Age 23 (02.10.91)
Hoffenheim (Ger)
A virtual stranger to the Brazilian public when called up last year, the striker has made a good start
to his international career. Links up the play and shoots well from range.

DUNGA
Age 51 (31.10.63)
Abrasive character who played in three World Cups and was the winning captain in 1994. In his second spell in charge, his only other coaching job was a mediocre few months with Internacional.