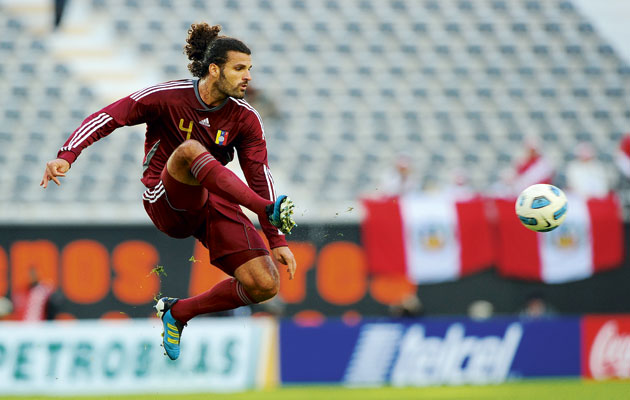 A creditable fourth place in the last Copa was followed by a famous win over Argentina in the second round of the 2014 World Cup qualifiers – leading to hopes that Venezuela might finally make their debut in the finals of that competition.

In the end, they tailed off and finished five points short of the play-off position, with a haul of just 14 goals in 16 games telling its own story.

There are worries at the other end as well and coach Noel Sanvicente has had an uneasy first year in charge, with a lack of pace in an ageing defensive unit proving a big problem.

“We’ve been very inconsistent,” said Sanvicente, summing up his reign so far after a 1-0 win over Peru in the USA at the end of March. “There are times when we’re creating chances but we’re also conceding a lot of goals.

“We can’t be satisfied with producing moments of good football. Instead, we have to sustain this with more movement and the kind of intensity I’m asking for.”

The Copa is his chance to spend more time with his players and drill them into a more compact unit, capable of standing up to the problems that will be posed by group opponents Colombia and Brazil.
Venezuela will look on the second game, against Peru, as their best opportunity to pick up three points – if Sanvicente can sort out his side’s own obvious problems.

Noel Sanvicente is traditionally a fan of 4-2-2-2, with a pair of defensively minded central midfielders, and another pair of more attacking ones thrown wide. However, wary of leaving his side too open, a common variation has been the switch to a 4-2-3-1, essentially splitting the strikers, with the second one dropping deeper.

The position of the defensive line will be interesting. If they play a high line, a lack of pace could be exposed; if they drop deep then the two central midfielders can be isolated and overrun.

The aim will surely be to try to stay compact and get enough players up to support the centre-forward.

Oswaldo VIZCARRONDO
Age 30 (31.05.84)
Nantes (Fra)
Commanding central defender and leader of the line under Sanvicente at Caracas. Now playing in Europe, he is starting to look a little heavy in the legs.

Tomas RINCON
Age 27 (13.01.88)
(Genoa (Ita)
The key link man in midfield, he knits the side together with his intelligent passing. He can also play as a full-back but is not a natural defender and is liable to make rash challenges.

Juan ARANGO
Age 35 (17.05.80)
Tijuana (Mex)
Attacking midfielder who was in the 1999 Copa squad and is now the country’s most-capped player. May be approaching the end of his career, but is still useful from set pieces.

Josef MARTINEZ
Age 22 (19.05.93)
Torino (Ita)
Quick support striker whose movement can cause problems for defences, either on the flank or in a withdrawn central position. Has played in Switzerland as well as Italy.

Salomon RONDON
Age 25 (16.09.89)
Zenit (Rus)
Centre-forward with great strength and good technique. The team’s most potent attacking weapon, he scored five times in World Cup qualifiers but has struggled to find the net since.

Noel SANVICENTE
Age 50 (21.12.64)
“Chita” is a former international striker who has won the Venezuelan league title seven times as a coach: five with Caracas and two with Zamora. A popular choice when he took over in July last year.