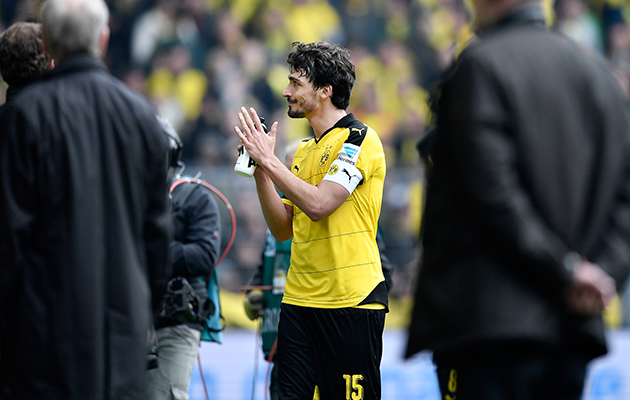 1. Hummels: here, there, everywhere
Dortmund’s announcement that skipper and centre-back, Mats Hummels, was keen to move to Bayern Munich in the summer has been generating enough heat and light to be an alternative energy source.

Throughout the Ruhr club’s 5-1 home victory over Wolfsburg on Saturday, the 27-year-old German international was booed, abused and the subject of bitter banners (“The first to leave the ship is the captain, preferably straight away.”) and while some pundits considered Hummels to be fair game, the Schwarz-Gelben front office were not at all impressed with the reaction of the fans.

“For a long time we’ve had a ground rule at Borussia Dortmund that we don’t whistle players in our colours, that we don’t insult or denigrate,” declared general manager, Michael Zorc.

“You can be disappointed and perhaps even critical. However, I find it shameful. I hope it doesn’t happen again.”

So who set this particular ball rolling ?

Former Bayern president, Uli Hoeness, claimed Hummels – once a youth teamer and reserve at the Bavarian club – knocked on the Allianz-Arena door himself.

“Humbug”, retorted the player, with his usual sense of style.

2. Thuggery 1 Sporting True Grit 0
After winning 2-1 at local rivals Darmstadt on Saturday and clambering out of the direct relegation spots, Eintracht Frankfurt should have spent the rest in weekend basking in a rare moment of self-satisfaction.

Sadly, though, few seemed to notice, more preoccupied with the outbreak of hooliganism which cast a long, unedifying shadow over the regional showdown. Not exactly a pleasant afternoon out. Skirmishes on the terraces, disorder in the city centre and no fewer than 159 ‘fans’ taken into custody.

Following crowd trouble at the first derby of the season, the local authorities in Darmstadt had hoped to prohibit Eintracht supporters from entering the town over the weekend, only for a local administrative court to overturn it, deeming such a blanket ban to be unlawful. A penny for their thoughts now.

3. Brandt’s bandwagon will take some stopping
If Leverkusen’s grip on third-place – and final Champions League qualifying berth – is becoming ever tighter, a large slice of the credit must go to brilliant left-winger Julian Brandt.

Saturday’s 2-1 home victory over a fading Hertha Berlin was the sixth successive game in which the German Under 21 star has scored and not surprisingly, there is a growing clamour for Bundestrainer, Joachim Löw to take him to Euro 2016 as a wild card.

“Obviously I’d love to go to the European Championships, but I’m relatively relaxed about it,” says the 19-year-old. “What will happen, will happen.”

In other positive news for the ‘Werkself‘, in-demand keeper, Bernd Leno, has decided to stay, opting not to take advantage of a release clause in his contract.

4. Start the week the Werder way
The first Bundesliga match to be held on a Monday night for 16 years, Werder Bremen’s 6-2 victory at home to fellow strugglers Stuttgart provided both spectacle and yet more twists and turns in the ever-evolving relegation process.

While Bremen moved out of the bottom-three, Stuttgart now find themselves in one of the automatic demotion spots, ominously without a win in seven. Ostensibly, the game was moved to Monday at the behest of the Bremen police, who had argued that they did not have enough manpower to simultaneously oversee a Bundesliga match and the numerous May Day rallies and demos.

However, up and down the country, the fear of many fans is that Monday fixtures become a permanent part of the scene. Just as in England.

“An away game 650 km away means you have to take two days off work and as for schoolkids, they have absolutely no chance,” says Stuttgart ultra leader, Daniel Epple.

“You have the impression that for the DFL (the German League), the interests of the broadcasters and police are far more important than those of the fans.” 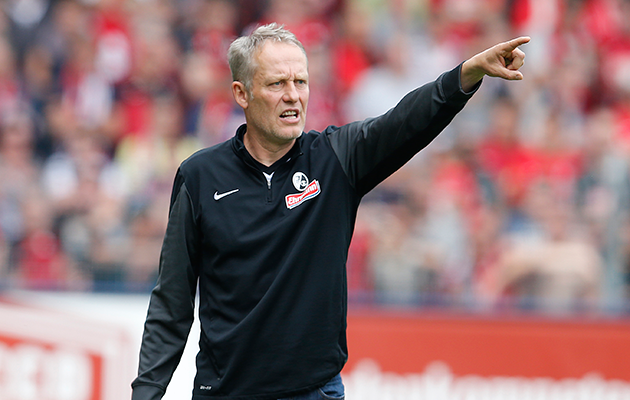 Freiburg’s longstanding coach Christian Streich has led the team back to the top flight again.

Twelve months after slipping out of the Bundesliga, Freiburg are back in the penthouse suite, sealing a swift return to the top-flight with a 2-1 win at Paderborn.

The classic yo-yo club, regularly bouncing between the first and second tiers of the German game, the Black Forest outfit’s great strength is that they do not do knee-jerk, never veering from their belief in continuity of leadership – coach Christian Streich has worked there since 1995 – the blooding of youth academy products and eye for a cut-price deal in the transfer market.

Their two most influential players? Free-scoring ex-Bayern and Bremen striker, Nils Petersen and Italian winger or midfielder, Vincenzo Grifo, the best dead-ball man in the league.