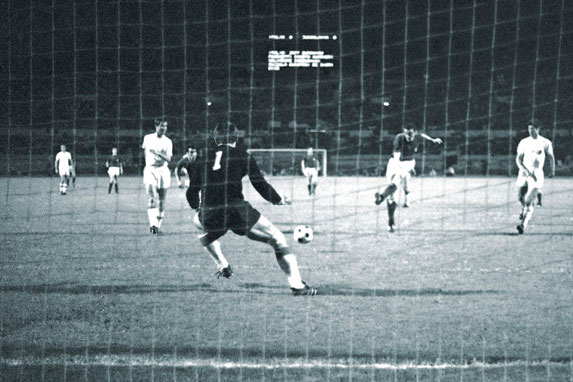 No doubt...Anastasi strikes Italy's second goal in the replay.

Azzurri grind out victory after replay

Only two of UEFA’s 33 members, Iceland and Malta, declined to enter the 1968 competition. But while West Germany were there for the first time, they were one of two seeds who went out at the mini-league stage.

The West Germans could only draw their final game, against Albania, allowing Yugoslavia to go through to the quarter-finals, while Portugal finished second to Bulgaria. However, the other six seeds – holders Spain, England, USSR, Italy, Hungary and France – all progressed.

The British Home Nations championship doubled up as one of the groups and was won by England, who then played Spain in the pick of the quarter-finals. After Bobby Charlton scored at Wembley to give England a first-leg lead, Amancio levelled the aggregate score in Madrid before goals from Martin Peters and Norman Hunter sent England through to their first semi-final.

In the other quarter-finals, Yugoslavia thrashed France 5-1 in Belgrade to win 6-2 on aggregate, while Italy and the USSR recovered from first-leg away defeats, to Bulgaria and Hungary respectively, to progress.

Italy were rebuilding after their humiliating exit at the hands of North Korea in the 1966 World Cup and new coach Ferruccio Valcareggi had some outstanding individuals, such as goalkeeper Dino Zoff, left-back Giacinto Facchetti, attacking midfielder Sandro Mazzola, and forwards Pietro Anastasi and Luigi Riva.

But the Azzurri needed a slice of luck to progress after their semi-final against the USSR in Naples ended goalless after extra time. The match was decided by the toss of a coin and the hosts headed for the Final.

Italy’s opponents in Rome were Yugoslavia, who had beaten England 1-0 in Florence as goalscorer Dragan Dzajic dazzled and Alan Mullery became the first Englishman to be sent off in an international.

In the Final, Dzajic opened the scoring for Yugoslavia, but Angelo Domenghini equalised from a controversial free-kick awarded by referee Gottfried Dienst.

With the scores level after 120 minutes, the two teams met again in a replay two days later. An early goal by Riva was furiously disputed by the Yugoslavs, but after Anastasi added a second, Italy’s first (and so far only) European title was never in doubt. 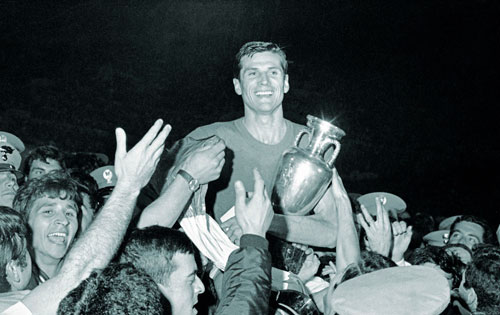 Switzerland’s Gottfried Dienst is one of only two men to have refereed both Euro and World Cup finals (the other is Sergio Gonella of Italy). However, not only was his officiating of the 1968 European Championship showpiece controversial, he was also the man in the middle who awarded England their hotly disputed  third goal in the 1966 World Cup Final after consulting with his linesman, Tofik Bakhramov.

The 1968 tournament was the first to be known as the European Championship.

There were also some changes in the competition’s qualifying structure, with the two-legged, home-and-away knockout stage replaced by a group phase.