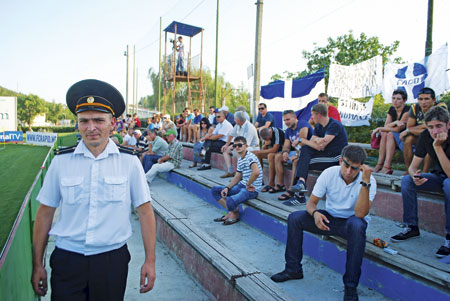 The new, gleaming, state-of-the-art stadium of Sheriff Tiraspol is a sight to behold. Widely recognised as one of the best in eastern Europe – and certainly the finest in Moldova, Europe’s poorest country, with a GDP per capita of under £1,200 – the Sheriff complex boasts a 15,000-seat stadium, a second smaller stadium, eight all-weather training pitches and a hotel for the players to stay in before games.

It is an arena befitting a team that has dominated the Moldovan league, winning 11 of the past 12 championships and thus securing regular entry into the Champions League qualification stage.

Incredibly, the club have played 50 Champions League games since they were formed in 1997, and this season Sheriff began another attempt to reach the group stage for the first time and fly their country’s flag on club football’s biggest stage. The big issue, however, is which flag do they fly?

It may seem like a strange question, but the answer can be found outside the ground. Not with the ubiquitous yellow-and-black corporate flags of the Sheriff corporation that owns the club and which flutter from every turret like in some Orwellian dystopia, but rather on the three billboards by the road side. One shows the hammer and sickle; another displays the words CCCP, the Russian acronym for the Soviet Union; the third an unusual green-and-red flag.

The flag is that of Transnistria, which you won’t find on any map. That’s because, technically, it doesn’t exist.

Transnistria is a self-declared, breakaway republic, a 15-mile wide sliver of land on the east banks of the Dniester river on the Moldovan-Ukrainian border that has lived in virtual isolation from the rest of the world after a failed war of independence with Moldova exactly two decades ago. It has in that time become a haven for smugglers and gun-runners.

Statues of Lenin still stand on its wide, clean boulevards and it has its own border, police and currency – the rare and virtually worthless Transnistria rouble. And, in its capital Tiraspol, it has its own successful football club, Sheriff.

Sheriff are arguably the only institution that can operate freely outside Transnistria’s borders, policed as they are by Russian peacekeepers even though it is on Moldovan territory. Trade with anyone but Russia is virtually impossible, given that no country in the world recognises its customs stamp.

But the story of Sheriff’s monopoly of Moldovan football says something much more than about the power of money to buy football success; it also highlights one of the world’s few remaining “frozen conflicts” and the growing front line between Russia
and the West.

No one recognises Transnistria
Sheriff were founded in 1997 by the secretive businessman Viktor Gushan. Four years earlier he had set up the Sheriff corporation, which now dominates the local economy. The money has made Sheriff the richest club in Moldova, allowing them to build the best stadium in the country and sign talented young players from Africa and nearby Serbia. As no one in the world recognises Transnistria, including UEFA, Sheriff have to play in the Moldovan league. Every away trip is a reminder of the conflict on Moldova’s eastern border.

“They are really feared, this club from Transnistria…they have won 11 titles but they stopped celebrating after the fifth or sixth,” says Mihai Sitnic, a Moldovan football journalist who concedes that the domestic league is little more than a formality for Sheriff. “The fans are mad. When they go to the Sheriff stadium, Sheriff fans scream ‘Russia! Russia!’ and insult the Moldovan side – like they are Russian, we are Moldovan. There are three teams from that side of the Dniester [river] and they are for Transnistria. It is difficult to cross the border.”

The difference between those from Transnistria and the rest of Moldova is laid bare at Sheriff’s second league match of the season, away to Academia UTM. The pitch in Ghidighici, a tiny village a few kilometres outside the capital Chisinau, is potholed and the rotten wooden stand falling to pieces. Only a few hundred Academia fans turn up, but a coach-load of Sheriff fans arrive under police escort, singing their songs, including the Russian national anthem. “Fuck you, bitch,” spat one fan as he walked past before pulling on a balaclava and leading his ultras in pro-Russian nationalistic songs.

“I don’t like the pitch here, but you should see the pitch at Sheriff in Tiraspol,” says Aleksandar Pesic, an under-21 Serbia international who recently signed for Sheriff, as he stretches before kick-off, oblivious to the singing. “It’s perfect.”

Sheriff beat Academia 4-1 after bringing on two big-money foreign signings, one of them Pesic, who scores a stunning free-kick.

It is a rare opportunity to speak to anyone from the club, who, like the Transnistrian authorities, are secretive in the extreme. Even two decades after the war of independence with Moldova, phone calls between Chisinau and Tiraspol do not connect.

“With Transnistria there are always secrets,” says Sitnic. “They don’t want anybody to know about this club. Everything is hidden. Every club in Europe wants to promote his product to the world. But when we call Sheriff they won’t tell us anything.

“I think it’s the mentality of the political situation in Moldova and Transnistria. They think, why should we give information to the Moldovan side?”
State within a state
The issue of having what is effectively a state within a state has posed some problems for the Moldovan FA. Sheriff offered to host Moldova’s first high-profile 2014 World Cup qualification match this September, against England – which made sense, what with Sheriff having the best stadium in the country.

But the thought of Moldova’s team, fans and officials having to cross an unrecognised border to receive an unrecognised visa to watch their own national team was too much to bear. The match will now take place at the Zimbru stadium in Chisinau.

Sure enough, arriving at the Transnistrian border is like stepping back in time. Transnistrian police officers, wearing wide-brimmed hats with the hammer and sickle embossed in the centre, search the bus and proffer three-day visas for each visitor. Foreigners have to register with the police within 24 hours.

No one from the club wanted to talk. Instead UEFA’s obligatory, cursory press conference following Sheriff’s 1-0 win at home to Ulisses of Armenia in the Champions League was the only window on the club.

“I think it is very important for our team,” said the club’s Slovenian captain Miral Samardzic, when asked what qualification for the group stage would mean. “I think Sheriff is the biggest club in Moldova. My aim is to play in the Champions League, or at least the Europa League.”

The club’s Serbian coach Milan Milanovic agreed that making the group stage would put Transnistria on the map for the first time. “I hope so,” he said. “I don’t know [anything] good from Tiraspol except Sheriff. The football club is famous in European football.”

Any questions that veered from enquiries about player injuries and mentioned Transnistria, Viktor Gushan or the club’s finances were nixed by the club’s press officer.

The mysterious Gushan was not at the game, which saw Sheriff qualify for the third qualifying round. And he is going to have to wait at least another year before he can realise his dream of Champions League group-stage football.

A 1-0 home defeat to Dinamo Zagreb was followed by a 4-0 reverse in the return. However, that disappointment was short-lived as Sheriff were drawn to face Marseille in the Europa League fourth qualifying round.

If Sheriff can cause a major upset and beat the 1993 Champions League winners, one of the world’s forgotten frozen conflicts will suddenly become front-page news again.

* This article was published in World Soccer.