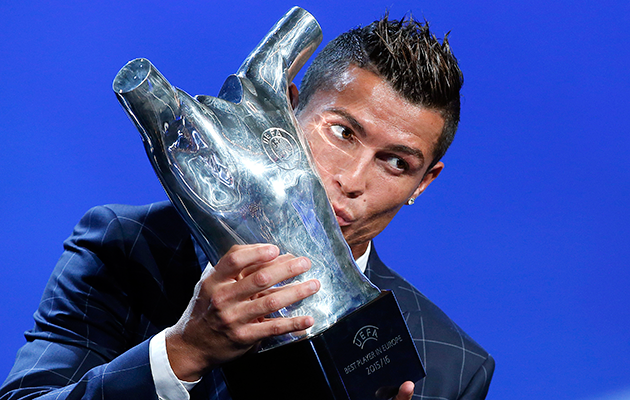 World Soccer: Congratulations on winning UEFA’s Best Player in Europe award. Was last year your best season ever?
Cristiano Ronaldo: Probably. In terms of trophies, I can say yes. Every year since I started to play football has been amazing, but this year was special. First of all because we won, for the first time in the history of Portugal, that important cup. For Real Madrid to win the Champions League again, it was an amazing year. I want to say thank you to my team-mates, thanks to everyone involved in the success of the national year. It’s been an amazing year. I’m so happy. But I have to mention these two other amazing players [fellow nominees Gareth Bale and Antoine Griezmann] because they played amazing too.

How does winning an international competition compare to winning with a club side?
It was the first time, it’s always special when you win something for the first time. I’ve won the Champions League three times but my dream was always to win something for Portugal, with the national team, and that’s what we did. We won for the first time and the feeling is completely different. I was very emotional. I was thinking about my team-mates, my family – my whole family because we were all born in Portugal. So the feeling was a little bit crazy. I cried a lot. Sad moments, emotional moments, happy moments; it all happened in the same day. So it was unbelievable achievement, it was a special day.

During the Final against France, you were injured early on but you seemed like an assistant coach to Fernando Santos on the touchline…
Don’t joke, that’s my future! 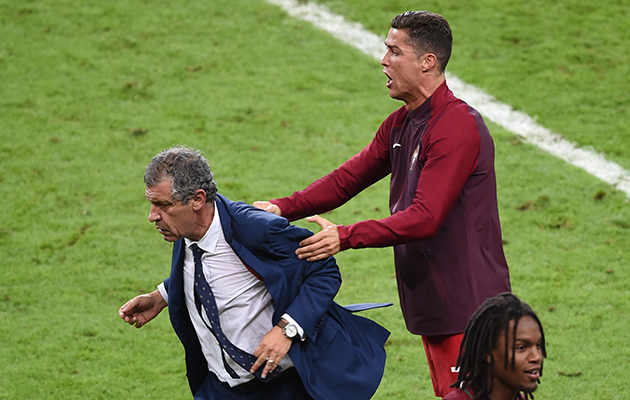 Cristiano Ronaldo on the touchline with Portugal coach Fernando Santos.

But, seriously, have you ever thought about becoming a coach some day?
It’s not something that I think a lot about. If you ask me right now, I don’t want to be a football coach. After a few years, people might say, you have the profile to be a coach, but I don’t want to, it’s too complicated. Right now I just want to focus on football, this is my passion, this is what I love to do. But in the future, nobody knows, maybe in five, six, 10 years, I will change my mind and I will be an amazing coach! Let’s see.

You won the most important trophies in Europe last season and now you have won the Best Player in Europe award. How do you manage to motivate yourself for this new season?
For me, every season is a challenge. Many people ask me how I’m going to motivate myself to win more things because you’ve won everything already. But football is my passion and I’m still able to make the fans happy. People love to see me, so I try to do my best, I try to score goals, to help my team win trophies, individually and collectively. Every year is a challenge, this year will be the same as the last 10 years. To score goals at a high level, maintain my performance, that’s what I try to do.

You have won all these trophies but the World Cup is still missing. Do you think Portugal be a strong contender for the World Cup finals?
Oh come on! We’ve just won the European title for the first time in the history of Portugal. The World Cup? Of course it’s possible. Everything in football is possible. It will be tough as we have pressure now for the next World Cup.

I’m comfortable with my team-mates, our country supporting us, they are smart enough to know what Portugal can do. If you ask me if it’s possible, of course it’s possible, but let’s enjoy the moment. It’s the first time in the history of Portugal that we win the European Championship, so it’s good. But, as I say many, many times, everything in football is possible, so let’s be positive. 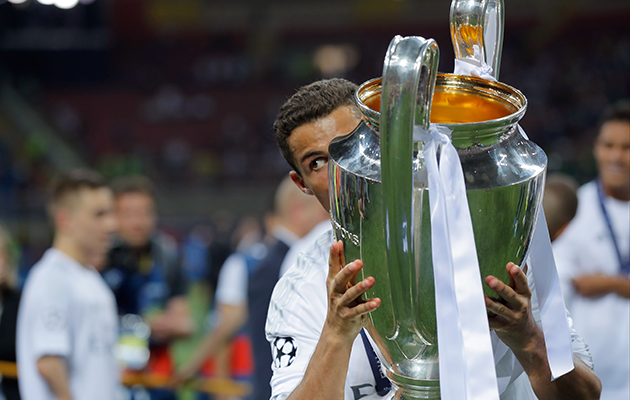 Since the group-stage format was introduced for the Champions League, it has ever been won by the same team two years in a row. Can Real Madrid change that this season?
I think so, it’s possible. No one has won it twice in a row, right? If you play for Real Madrid, you have to think like that, so I think it’s possible. We have a good team, we have a good coach. We have the experience of last year. We know it’s a very tough competition, we need to be a little bit lucky but I’m looking forward to it.

It’s a good challenge. For us, Real Madrid, as a team, and I think it will be possible to this year. I’m positive that we’re going to win it again.