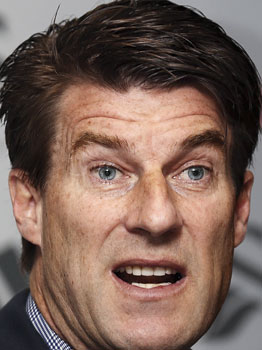 World Soccer: How do you look back on your first season as a manager in the Premier League with Swansea?

Michael Laudrup: This season will be remembered for years and years as the one in which the club won its first major trophy. That stands above everything else. Personally, it had a huge impact for me. I won a lot of cups with big clubs as a player, and it’s always nice to win trophies. At big clubs it is the target every season. It’s different with a small club, so when you do that it’s very special.

Did your first experience of being involved with the Premier League match your expectations?

Although it was my first year working here, I have followed English football closely since watching on television as a boy in the 1970s, when I liked Steve Heighway at Liverpool and Peter Lorimer at Leeds.

It was much as I expected, but I enjoyed the fact that teams play different styles of football. I also like the respect that is in the game for players and opponents. You don’t hear negative things when you arrive at stadiums, which can happen in other countries. I was glad that this impression I had was confirmed. Respect is a great part of English football culture. There can be exceptions, of course, but in general that’s how it is.

Do you have any regrets that you never played in the English league?

No. The other night I saw on television a game from the 1980s and I thought: “Ah, now I remember why I would never join an English team.” It was a game in January, there was no grass on the pitch at all, the players were completely covered in mud and the ball was always in the air. I remembered why. It has changed completely now. Everywhere you go there are fantastic pitches. Today, the best pitches and stadiums are here in England and in Germany. Today, I would have loved to play in the Premier League.

How does the quality of play in the Premier League compare to Spain and Germany?

We always like to compare in football – between countries, and with periods in history – but I like the fact that football is different. Football doesn’t have to be one particular style as a way to arrive at success. It’s about what you like. For me, I love Spanish football. I played at the two big clubs and I really liked it. I also have to admit that Bayern Munich and Dortmund play fantastic football. It’s different in England and it’s not about saying one is better than the other. At Swansea we play a possession game. Then there are teams who like combination play, and there are teams who are more direct and very physical. I don’t think there is a right and wrong way to play – and for a manager it’s been a fascinating challenge to take on each style.

Do you work specifically on this in training with Swansea?

Oh, yes. We work on it a lot. Even in smaller-sided games we practise for these moments. Not just on how to strike at an opponent, but what to do when you are the team that loses the ball. My thinking is that you want to get it back as quickly as possible. The best team in the last five years has been Barcelona, and people said they were top because they had the best players and they were so good in possession. People never mentioned – at least not for a long while – that every time they lost the ball they got it back within three seconds. They reacted immediately and that was so important to their success. I think transition is very, very important.

How crucial has Michu been to your season at Swansea?

For quality compared to his price [£2million], he has been fantastic. Twenty goals for such a small amount is a wonderful bargain. It’s not easy to find that. I don’t know why the big clubs in Spain did not buy him, and fortunately last summer there weren’t many scouts from the Premier League watching the lower teams in La Liga. But after Michu that has already changed. I know from my people that every weekend there are now a lot of Premier League representatives watching a lot of games in Spain. There are some quality players there, and because the salaries are higher in English football overall I think it will be a very important market in the next few years.

You played for Barcelona and Real Madrid and seem to be a rare example of a former star that the fans of both clubs welcome back with smiles. What’s your view?

It was great to be at two clubs like that and I’m happy that the supporters have good memories. What can I say? When I look back at Barcelona it’s another place where I was lucky enough to be somewhere special because we were the first team to do something – in this case win the European Cup/Champions League.

The modern Barcelona are a wonderful side with more technical quality than our side, but we have something they can never have: we were the first ones. Before us, Barcelona won a league title once every seven years. Suddenly, we won four in four. That is difficult to compete with. It’s similar with Swansea. In 15 years’ time there may well be a better Swansea side, and a better manager than today, but they can never beat what we have done for one reason: we were the first.

If there was a perfect world, what is the one thing you would change to make football better?

It’s not a perfect world. It’s full of mistakes, and football is all about mistakes now. That’s not just referees, but players. Probably 95 per cent of every goal scored nowadays is because of a failure somewhere else; not marking, a bad pass, the goalkeeper, whatever. Football is about punishing mistakes. It’s also about quality and imagination.

There are things around football that are not right and need to be sorted out: match-fixing, and racism from some spectators.

One improvement to the game has definitely been the increase in cameras because it deters violent play. The players are much more protected now. I remember going to Italy in the mid-1980s and things could still happen on the field. When I talked to the players a generation older, I remember the president of Juventus, [Giampiero] Boniperti, telling me that when he played away games so many things happened. He would suddenly be lying on the ground with blood coming out from his nose. That’s how it was.

* This is an extract taken from an interview with Michael Laudrup. The full interview can be found in the July issue of World Soccer.