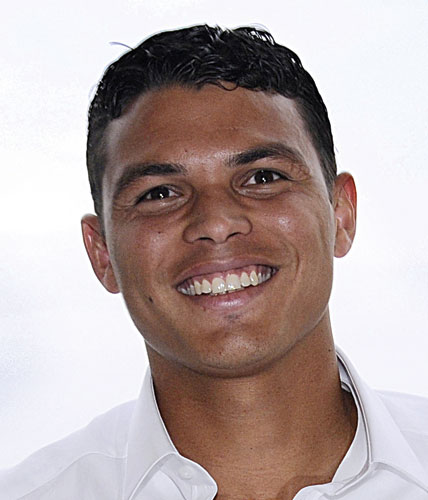 World Soccer: PSG will want to make their mark in Europe this season. Did you enjoy the Champions League group-stage draw?

Thiago Silva: There’s no such thing as an easy draw and you just have to look at the history of this competition to see that. Of course, a lot of people will look at PSG’s investment and imagine we’d have to make the Final immediately. That’s now how the game works – look at Chelsea, who needed eight years to finally win the Champions League for the first time, even after all the money they spent. But we need to go a step further this season. We are aware of the huge expectations surrounding PSG.

Did the quarter-final run last season, when you lost on away goals to Barcelona, raise hope for this season?

Of course. As we know, we were a whisker from the semi-final. I regret we respected Barcelona a bit too much when they came to Paris, but what we did at Camp Nou was beautiful. We could have won the tie.

How are things looking for this European campaign?

Every team can make things hard for you. Of course, Real Madrid, Barcelona, Bayern Munich, Chelsea and Manchester United are teams people expect to do well. But if you are not in the zone the unfancied sides will have you for dinner.

Edinson Cavani’s arrival has strengthened PSG, but did it also create a problem in the sense of another ego to handle?

From the outside you might think so, but people don’t really know the players. Ibra [Zlatan Ibrahimovic] is seen as a difficult guy but he has adapted to Edinson’s arrival…and so far he hasn’t moaned! But if he loses the kickabout in training he will sulk for hours. I remember once where he threw a tantrum because I mishit a pass. He apologised later in the funniest way ever and I just had to laugh.

What about Monaco’s financial situation? Is it good to see the attention diverted a bit from PSG?

It’s great publicity for French football. PSG attracted a lot of interest to Ligue 1 and now Monaco will help a lot. They have made great signings, but it’s important to point out that the return on investment is not automatic. PSG, for example, didn’t win the league in their first season with the new owners. There are good teams in Ligue 1 and sometimes people dismiss the quality here.

Do people focus too much on how much money PSG are spending?

I actually see a little prejudice because we are a French team. But a lot of people don’t follow Ligue 1. I didn’t watch many games before coming here, but my opinion has changed radically since I arrived. The league is very competitive. The money thing is always going to be around, but sometimes it seems PSG are the only ones spending money! To win trophies you need to invest. If you want a nice suit you have to invest in fabrics and a good tailor. If players are good they will be expensive.

How much did Leonardo’s resignation as sporting director of PSG affect you?

He was crucial in convincing me to come to France and it was sad to see him go. We also had a managerial change, but you have to adapt; football is like that. But the club has been wonderful to me and even accepted my request to have my physiotherapist come to Paris to help with my fitness. I had some nagging injuries last season and really want to be healthy now.

Did Brazil’s 3-0 win over Spain in the Confederations Cup Final send out a message ahead of the World Cup?

We did not want to send anybody anything, just to play well. But beating Spain, one of the best teams in the world, definitely shows our intent. It was hard before to hear some people implying Brazil were not inspiring fear anymore. I’d love to hear their thoughts now. Brazil have always respected other teams, even though we refuse to change our ways because of opponents. We didn’t sit back, even against Spain. We went for it.

You must admit, though, the Selecao seemed transformed in that game…

We spent three days talking about how to play Spain, in the build-up to the Final. We heard the Bayern Munich guys talking about their impressions of tiki-taka when they played Barcelona in the Champions League and even [Barca full-back] Dani Alves spoke about the trouble Bayern’s pressing high up the pitch had caused them. [Brazil coach] Phil Scolari then asked us: “Want do you want to do?” We replied at the same time: “We want to attack them.” Fair play to Big Phil, it was a very good psychological move. But we had to attack Spain if we wanted to win.

How pumped up were you guys?

I had never seen David [Luiz] so focused. He almost did not smile. You looked around and saw everybody wanted really badly to get on the pitch. I still watch the video of that game. We did everything perfectly and everything went our way. Neymar even scored a screamer with his left foot – which we used to joke was only good to press the clutch when he’s driving!

Are you favourites to win next summer?

We can’t think like that, but it was important to win a trophy and feel we have narrowed the gap to the other teams. A lot of people forget we had massive changes in personnel after the last World Cup and a change of coach as recently as last November. We have bought some time to work and to test the team in the friendlies we have before the tournament, but it would be silly to think we are simply the best around now just because of the Confederations Cup. It did feel good, though…