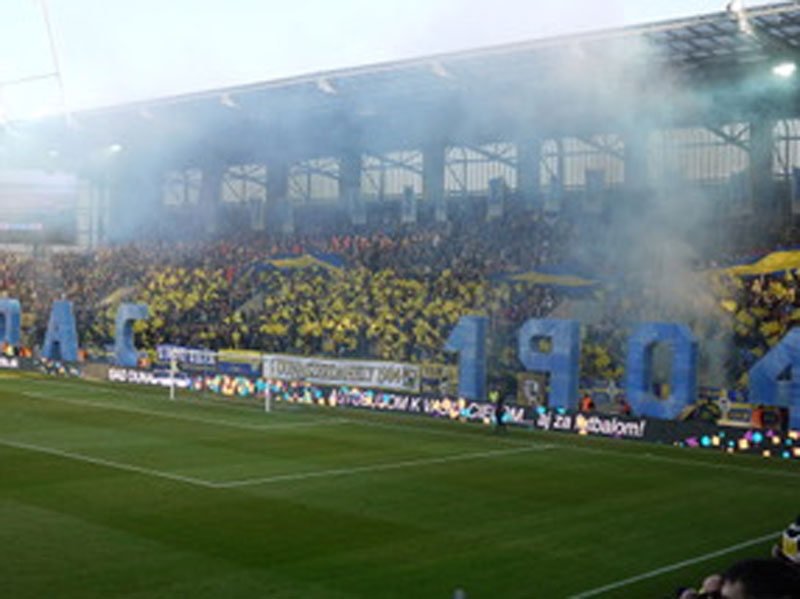 FC DAC 1904 On The Up In Slovakian Football | Steve Menary

Oszkar Vilagi watches pensively from the balcony of his VIP box.

Five years after buying out DAC, his club are playing the biggest game in their history.

The new €14 million new academy is open. A €29 million stadium renovation is complete. A pig was slaughtered that morning and made into sausages at the pre-game fan-fest.

Fans have flocked to the game from Budapest. Katinka Hosszu – a three-time Olympic gold medallist at swimming for Hungary – took the ceremonial kick off.

Hungary’s national anthem rings out as Hungary’s third most popular team kick off their first match since the winter break.

Except DAC are not Hungarian. FC DAC 1904 are from Dunajska Streda in southern Slovakia, which was part of Hungary until the end of World War Two.

Around 10% of Slovakians speak Hungarian, mostly in the Zitny Ostrov region, where Dunajska Streda is the biggest town and DAC is their passion.

Only 22,000 people live in Dunajska Streda, but a club record 12,135 crowd watches DAC face Slovan Bratislava in a game that will decide the 2018/19 Fortuna Super Liga title.

Slovan are the establishment side. The only side from the former Czechoslovakia to win a European title, memorably upsetting mighty Barcelona in the 1969 Cup Winners Cup final.

Apart from the 1987 Czechoslovak Cup, DAC have not won any major titles but they are Slovakia’s most popular club, averaging 7,500 in the first half of the 2018/19 season. Amongst Hungarian fans, only the national team and Ferencvaros attract more supporters.

A regular spectator at DAC – though he is absent for the Slovan game – is Hungary’s controversial prime minister, Viktor Orban, who knows more than any European leader how to use football to cement a popular power base.

By next year, Orban’s government will have built or renovated at least 32 football stadiums, at a cost of 215 billion Forints (€709 million) to Hungarian taxpayers, according to Hungarian investigative news website, Atlatszo.

That spending does not stop at national borders.

Another investigation last year by Atlatszo discovered that Orbán’s government is funding a swathe of football clubs in Hungarian-speaking regions in the neighbouring countries of Croatia, Romania, Serbia, the Ukraine, Slovenia and Slovakia.

The money comes through the Hungarian Football Federation and the Bethlen Gabor Fund, a state body used to aid ethnic Hungarians in neighbouring countries.

This money is not funding players but projects, like DAC’s newly rebuilt arena and an academy with 10 pitches across 18 acres including heated grass and artificial surfaces.

Details of the funding shocked some in Hungary but few in Dunajska Streda, where Orban’s long-time friend Vilagi has almost god-like status.

Vilagi was born in Dunajska Streda. After training as a lawyer, he went into politics then began investing in businesses from shops to the town’s hotel – DAC’s headquarters until the new stadium opened – to the oil refinery business Slovnaft.

In 2002, Hungarian energy giant MOL took a majority stake in Slovnaft and Vilagi joined their board. In 2011, Orban’s government took a 21% stake in MOL.

Five years later, Vilagi stepped in to buy DAC from an Iranian group, which had dragged the club into a mire of match-fixing problems.

Vilagi’s personal wealth is estimated at around €150 million, and he is not wasting money on players’ wages. The stadium and the academy are the focus. MOL sponsor both.

This sponsorship and the Hungarian government money are simply another source of funding to Vilagi, who says: “The border is open. We go to Hungary for players too. We don’t care about that if we want to be successful.”

FIFA’s Forward fund is providing €350,000 a year between 2017 and 2021 for youth development, while the Slovak federation contributed €2.9 million to the academy and stadium. As part of these agreements, national youth matches will be played at DAC’s academy. A special changing room has even been built for these matches – and decorated in Slovak colours.

DAC do buy players such as Erick Davis, who joined in 2015 from his native Panama and last year became the first DAC player to feature at a World Cup finals, but Vilagi’s plan is based on the academy.

DAC want to be sustainable by developing and selling players. Vilagi adds: “We want to be in the first three every year and in the international competitions, but the players here need to have ambition to play at a big club. Our club is a bridge to the big clubs.”

DAC have a tie-up with Wolves, who have sent three players – Daniel Csoka, Connor Ronan and Christian Herc – to Slovakia, but the top wage is €10,000 and sales have already begun. In January, 21-year-old Ivory Coast striker Vakoun Issouf Bayo went to Celtic for a club record fee of €2.25 million. This should significantly boost DAC’s turnover, which was just €4.3 million in 2017/18.

Vilagi knows that a rapid turnover of players the connection with the fans at 2015 winners Trencin, where attendances are below 2,000. This is where DAC’s Hungarian links comes in.

Slovak is not even spoken on match days, but the club knows it treads a fine line. The Hungarian national anthem is not played officially but sung by DAC’s ultras straight after kick-off. Only when the last line is sung do home fans, including most of the press box, take their seats.

“The minority of Hungarian speaking people in this country will come here but we do not want to limit ourselves to that. Everyone is welcome because we are in a province of just 80,000 people. That is a problem,” says DAC’s head of match operations, Martin Tournyai.

One of Tournai’s first jobs was to actively engage with the ultras to improve the stadium experience. The success is evident in the atmosphere, which belies the size of the ground.

Second-placed DAC trailed leaders Slovan by eight points before kick-off but their high pressing game did not work against more experienced opponents and a silly penalty gifts the visitors a 1-0 win.

“Our average age is just 22. You can see the different in ages between the two teams on the pitch,” says DAC’s German manager Peter Hyballa after the game, when he concedes that the title is gone.

Two weeks later, Slovan’s manager Martin Sevela gets to enjoy his own stadium opening safe in the knowledge that his team are almost certain to win their first title since 2013/14.

Sevela has benefitted from 18 months in the role, and significant spending on players. David Holman and Kenan Bajric  each cost €600,000, while Andraz Sporar cost around €1 million.

In a league where half the players earn less than €1,000 a month according to the players union, Slovan’s highest paid player, Sporar, is on €60,000 a month but the only Slovak starting regularly is goalkeeper Dominik Greif.

For all this spending, Slovan’s owner Ivan Kmotrik is not a popular man and in 2017/18 attendances dwindled to an average of just 1,629 as fans boycotted games.

A decade ago, Kmotrik had demolished Slovan’s old ground and promised a new one that is only now materialising. And then only after Kmotrik persuaded the government to let him build a €75 million new national stadium for them – mostly with their money.

As Artmedia – the name of a Kmotrik company – Petrzalka played in the 2005/06 Champions League group stages, but the club’s ground was sold and demolished in 2012. Left homeless, Petrzalka folded.

Inter were also left without a home and collapsed after Kmotrik bought their old ground as a temporary base for Slovan, who played there until the end of 2018.

Kmotrik is still negotiating whether or not to sell the new ground back to the government. If he does, Inter and Petrzalka, which were both resurrected and play in the second tier in grounds unsuited to the top flight, could share the new ground. This would not appeal to Kmotrik, whose machinations means he control’s the capital’s only top tier club.

The collapse of Inter, Petrzalka and FC Kosice from Slovakia’s second biggest city left a vacuum. With league entry only costing €30,000, the barrier to entry is low and those bigger clubs were replaced by small, financially weak clubs with tiny grounds and few fans.

“We have a few small clubs that are like a village and every season there is a problem as they don’t have the money,” says players union president Jan Mucha. “Slovak football is all about the owners. If they don’t want to pay, they don’t pay.”

Mucha sought to counter this by setting up a union a few years ago, and the owners clubbed together to form an association to sell league TV rights collectively for around €1 million a season.

Unlike many countries, the Super Liga owners all get on and Slovan’s owner even has a box at the DAC stadium.

While the emphasis on DAC’s Hungarian roots meets some opposition, league president Michal Metinyak needs Super Liga’s best attended club more than ever. Vilagi knows that. And so does Viktor Orban as he seeks to expand his sphere of influence past Hungary’s borders.