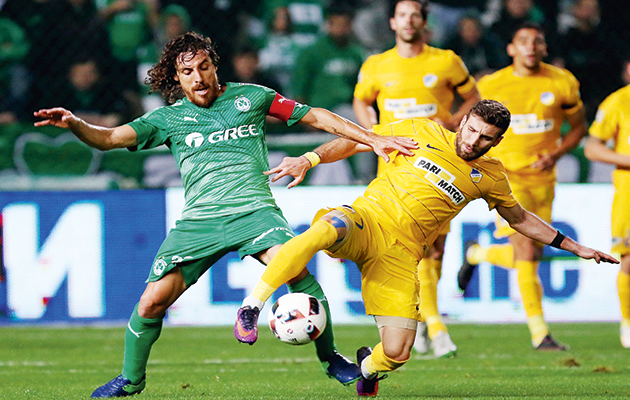 Omonia president Antonis Tzionis sits quietly in his chair in the offices of the Cypriot club. Although not naturally a quiet man, he knows that a word out of place could cost him another €5,000.

In December he made the claim that Cypriot football was “dishonest” and dogged by “filth, stench, nepotism, cronyism and corruption”.

The game, said Tzionis, was controlled by betting activity and corruption, and there is no freedom of speech. In response, he was fined €5,000 by the Cyprus Football Association (CFA) for bringing the game into disrepute.

For a game that, in recent years, has – on the pitch, at least – punched above its weight for an island of just 1.1million people, those are startling claims.

Since Anorthosis Famagusta became the first Cypriot side to qualify for the group stage of the Champions League, in 2008-09, AEK, AEL and Apollon have all reached the Europa League group phase.

The island’s biggest club, APOEL, have qualified for the Europa League or Champions League group stage five times in the last eight seasons, and in 2011-12 they went on a stunning run to the Champions League quarter-finals, beating Zenit, Porto and Lyon before losing to Real Madrid.

Former Barcelona junior Urko Pardo joined APOEL at the start of that season and has been there ever since. “Cyprus is a land of opportunity for players like me who did not get in the first team at home,” says the 33-year-old goalkeeper. “Twenty years ago, they would have had to drop into the third division, now they can come here and succeed.”

Former England under-21 international Matt Derbyshire joined Omonia from Rotherham United at the start of this season. An immediate hit, he is the Cypriot game’s biggest star and was the First Division’s top scorer at the halfway stage.

Like the Portuguese and Spaniards who make up most of the overseas influx, Derbyshire’s move was very straightforward as Cyprus joined the European Union in 2004, thus ensuring freedom of movement.

Clubs are expected to include at least two Cypriot players in their starting XI and are fined €1,500 for each missing player, so fielding 11 foreigners costs clubs €3,000 a game. But this makes no impact on chairmen like Andreas Karapatakis of AEK Larnaca.

“We get fined most weeks,” says Karapatakis, who ignores the rule due to the cost of wages for Cypriot players.

Meanwhile, the number of overseas players continues to grow.

CIES research in 2016 showed 65.4 per cent of players in Cyprus were foreign. The Pancyprian footballers’ union (PASP) puts the figure higher, at 86 per cent, and says every year two thirds of the players in Cyprus leave the island.

PASP president Spyros Neofitides is an outspoken figure in Cypriot football and has consistently tried to tackle the corruption. Like Omonia president

Tzionis, Neofitides has also been fined €5,000 by the CFA for speaking out.

“This season has been unique,” says Neofitides, who is a former goalkeeper. “We’ve seen some strange results from the start of the season.”

Christos Zavallis from the APOEL Supporters Trust says: “It’s to the benefit of the whole league for this to stop. If you want to attract players, it makes it more difficult.”

With money from TV, crowds and UEFA, First Division clubs are able to run full-time squads.

APOEL are the biggest payers, while AEK and Omonia pay their players between €80,000 and €150,000 a year – although actually getting paid has been a consistent problem. And that has enabled criminals to exploit an environment where match fixing has always existed.

“The soil here is fertile,” admits Professor Nicos Kartakoullis, a respected academic from the University of Nicosia and the youngest chairman of the Cyprus Sports Organisation until quitting in 2011 in sheer frustration.

During the Greek Civil War, from 1946-49, APOEL asked players to sign affiliation to the right-wing Greek government. Some players quit and left to form their own club and those political divides remain. 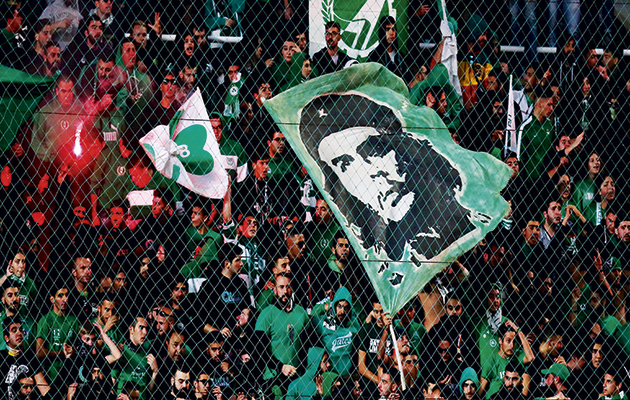 APOEL remain the team of the right., bitter rivals Omonia are the team of the left, while the likes of Nea Salamis Famagusta also attract left-leaning support. Matches used to be fixed for political gain; now it’s money – and the problem is spiralling out of control.

Recent PASP research shows that 40.5 per cent of players in Cypriot professional football are aware of match fixing, and 17.2 per cent have been approached. In 20 per cent of the cases, players are approached either during a game or a team meeting.

With no minimum wage, some players can be on as little as €50 a month, particularly if their club drops into the second division.

Earlier PASP research showed that 65 per cent of players fixing games are doing so because of delayed payments. In response, the CFA began checking payments. The problem remains bigger outside in the lower leagues but still affects the First Division.

In 2015, the CFA introduced new measures to stop the fixing, starting with a €5,000 fine for the first incident and rising to €10,000 for a second, with relegation for third-time offenders. The measures, however, did not work.

What are known as “red envelopes” from UEFA, notifying the CFA about games attracting suspiciously high levels of betting activity, poured into Nicosia in the first half of this season.

A 4-0 win by Apollon Limassol over AEZ Zakakiou on September 11 was the first to be flagged up by UEFA. A 3-0 win by APOEL over Aris Limassol on September 25 was next and the red envelopes kept on coming.

In November, UEFA’s head of integrity, Emilio Garcia, arrived unexpectedly on the island intent on action.

UEFA’s position on match fixing has been strengthened since Albanian champions Skenderbeu were thrown out of this season’s Champions League after suspiciously high levels of betting activity.

UEFA vice-president Marios Lefkaritis warned the CFA that the European body would take action against Cypriot clubs next. But the fact that Lefkaritis, who preceded Costakis Koutsokoumnis as CFA president, should take a stand against corruption was bitterly ironic.

Lefkaritis was a member of the FIFA Executive Committee in the infamous vote that decided the 2018 and 2022 World Cup hosts. In 2015, German company ARD TV screened allegations that Petrolina holdings, a company owned by Lefkaritis, did a deal with Russian oil and gas company Gazprom just two days before the vote.

Lefkaritis also sold land to Qatari companies for $32m but, after being confronted, he denied the Gazprom deal until being shown proof of his involvement, after which he claimed Gazprom were “not partners but his customers”.

A second warning brings immediate expulsion for the club for the rest of the season. Three-time offenders will be banned from all CFA competitions for five years and fined €1m.

Since the new rules, there has been no red envelopes and the fixing has stopped – for now. And while the threat of serious financial consequences may have worked, many clubs remain in a fragile position.

In 2013, Omonia were saved from collapse only after fans raised €3.5m.

The same year, Anorthosis, who earned €6.5m from the Champions League alone in 2008-09, nearly went under after accumulating debts of €13.5m. They are still up for sale.

AEK recently opened a new €8m stadium which was the first built by a Cypriot club with private funds, but most clubs play in rented grounds, with APOEL and Omonia, for example, sharing the GSP Stadium in Nicosia.

“APOEL have not invested the UEFA money and have nothing to show for it,” says Zavallis. 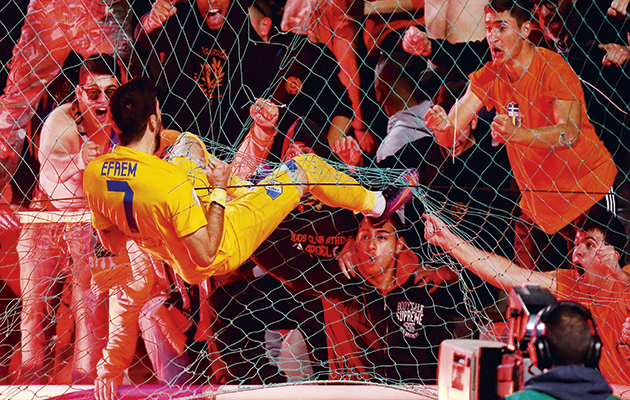 Bigger clubs such as APOEL and Omonia are not generally thought to be implicated in match fixing, other than by playing against teams who have been corrupted.

The problem, most people in Cypriot football agree, has been exacerbated by the CFA’s decision midway through the 2014-15 season to expand the First Division from 12 to 14 teams.

At the end of that season, one team was relegated and another disqualified, and four teams were promoted from the second tier. In August 2015, Koutsokoumnis was re-elected CFA president for a seventh consecutive term until 2019.

The league now splits at Christmas, with the bottom two immediately relegated. The top six chase European places, and the next six sides play off to avoid one more relegation spot.

Critics argue that there are too many matches of no importance involving smaller clubs, who in some cases have virtually no support. These clubs are typically the ones under suspicion. In Federbet’s annual “Fixed Matches” report for 2016, three of four Cypriot games cited as “suspicious” involved Aris Limassol.

And while the red envelopes may have stopped for now, the culprits are at large and problems still remain.

After AEZ Zakakiou drew 3-3 at Karmiotissa on December 16 with an injury-time goal, the car of visiting assistant coach Alexis Garpozis was bombed outside his house. A fire was also set off at the canteen of a five-a-side operation belonging to AEZ coach Demetris Demetriou.

“It’s crazy, something has to change,” says Professor Kartakoullis. “People are laughing at us. It’s humiliating, as people in Cyprus are crazy for football.

“At the end of the day you feel stupid. Why would you spend €20 going to a game when you know it could be fixed? Football in Cyprus is at an alarming stage.”

Now, at long last, the Cypriot government is getting involved.

“I am getting tired,” says weary union boss Neofitides. “The change in the law is our last chance. If this does not happen, then anyone can fix a match in Cyprus.”

The government has drafted legislation on sports integrity to allow Cypriot police to monitor private communications, including phones and emails, but how that will work with encrypted communication such as WhatsApp remains unclear.

“People can also just buy a SIM card in a mini market,” says Mario Panayi, a former Cypriot referee and another outspoken critic of the corruption on the island.

In 2015, Panayi convened a press conference and made widely published allegations about corruption at all levels of Cypriot football.

According to sources in Cyprus, there was a 48-hour gap between Panayi making his allegations to police and a raid on the CFA’s offices. No information was subsequently found, leaving Panayi looking stupid and raising suspicions that hard drives had been cleaned up in the intervening period. 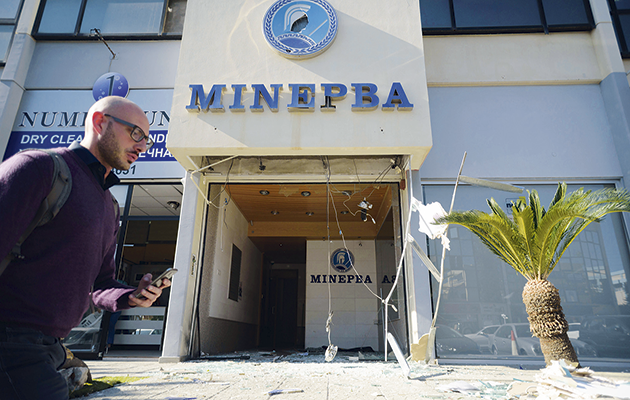 Getting the CFA to respond to this or other allegations is difficult as emails and letters to the media department and even direct to Koutsokoumnis go unanswered.

And Koutsokoumnis has good reason for keeping his head down as he stands for election to FIFA’s Executive Council in April.

Well regarded in football’s upper echelons, he mediated for FIFA in disputes between Israel and Palestine in 2014, and more recently between the Greek association and the government. But at home is increasingly under fire – literally, in the case of the Limassol offices of his company, Minerva Insurance, which were bombed just before Christmas.

Meanwhile, Panayi had another explosive surprise in store for Koutsokoumnis. The documentation that he sent to police in 2015, allegedly showing evidence of CFA corruption, was discounted because of how he obtained it, but he has more.

In January 2017, Panayi sent further documentation to the Cypriot police, and if this is ignored he will contact Interpol before the FIFA vote in April.

And that is not the only surprise the embattled Koutsokoumnis faces.

Back in Omonia’s offices, Antonis Tzionis finally speaks. He has a solution to the corruption and wants the top clubs to split from the CFA. Although such a seismic move would be difficult as the CFA controls the TV money, Tzionis feels that for the biggest 10 clubs to run their own league is the only answer.