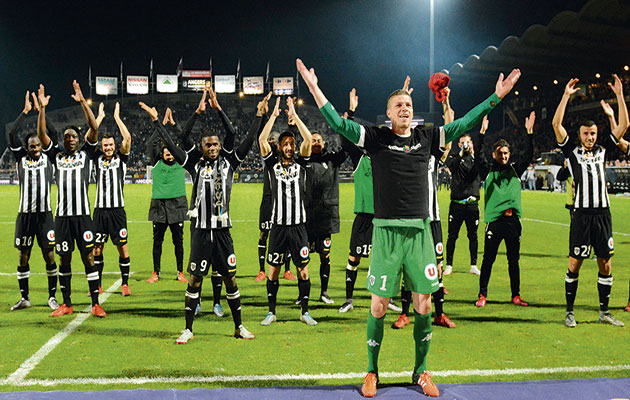 Just before France heads into its traditional winter break, there can’t be a single football fan in the country who is surprised by Paris Saint-Germain’s inexorable march towards a fourth successive Ligue 1 title. The problem is that nobody – not even the most rabid PSG fan – is even remotely excited by this.

Having opened up a massive 17-point lead over their nearest rivals after 18 games, the capital club have sucked the life out of the domestic league simply by being on a different planet to the rest of the competition: financially, technically and tactically.

Yet while the title is already a done deal, what has been genuinely thrilling in this season’s campaign has been the remarkable rise of two of the country’s most unfashionable teams.

At the end of last season, Normandy club Caen finished in a lowly 13th place, fully 37 points behind champions PSG. Angers, meanwhile, hailing from the unfashionable Maine et Loire region in the north west of the country, weren’t even at the top-flight table yet, having just sneaked out of Ligue 2 by grabbing the third promotion spot, behind champions Troyes and GFC Ajaccio.

Yet while Troyes are firmly rooted to the bottom of Ligue 1 this term, little Angers have been performing miracles. Under 48-year-old coach Stephane Moulin, a former Angers player, their first season back in Ligue 1 in over 20 years has seen them smashing records all over the place and defying expectations to sit in second place just one game shy of the 2015-16 halfway point.

Angers amassed an impressive 31 points, with just three defeats, in their opening 18 matches, but what has been most remarkable is that they had conceded just 10 league goals in that time. When compared to moneybags Monaco, who let in 23 in the same number of games, it’s not hard to see why Angers are riding high.

“We haven’t stolen a single one of our points,” says Moulin. “They’ve all been earned.”

Angers have the smallest budget of any of the 20 Ligue 1 clubs – just €24million, compared to PSG’s €490m – and didn’t spend a single penny in recruiting 10 players over the summer, preferring to sign those who were out of contract. The best of an impressive bunch has been Senegalese attacking midfielder Cheikh N’Doye, who arrived from Ligue 2 club Creteil and has proved to be one of the stars of the current season.

Not that anyone at Angers will talk of stars. The team’s success has been built around defensive rigour, solidarity between team-mates and bags of desire. As defender Romain Thomas explains:

“Those of us who’ve been here a while have made sure everybody knows we’re all in the same boat.

“There are no stars at Angers. It’s the team that matters and nobody gets above themselves. That’s why we’ve been able to carry on where we left off last season.”

Continuity has also played a major part in Angers’ rise to the top. Moulin has been at the club since 2005 and in charge of the first team since June of 2011, while sporting director Olivier Pickeu, who is primarily responsible for that incredible recruitment drive, has been on board since way back in 2006.

Of course, there’s still a long way to go. A number of big games against the likes of PSG, Bordeaux, Lyon and Saint-Etienne loom large on the horizon for Angers and they may well yet suffer a reality check. The talk from the Stade Jean-Bouin remains sensibly measured and is all about gathering enough points to avoid the drop, but somewhere deep down, all those humble servants must be wondering just where this fairy-tale season can end up taking them come May.
Just below Angers in fourth – and with just one point fewer after 18 games – Caen’s performance has been only slightly less impressive.

After a disastrous start to last season following promotion in 2014 – put down by many to the major distraction of allegations swirling around of match-fixing – coach Patrice Garande got to grips with the demands of the top flight in the second half of the campaign and gave some hints of the potential of his team.

That potential has been more than fulfilled so far this time out. Among Caen’s hugely impressive results to date was a 4-1 spanking of Bordeaux away in November. The team has shown real character, too, shrugging off a 4-0 home defeat by Lyon in August to regroup and drive themselves up the table.

“We’re not used to being in this position,” says Garande. “But I try to put the least possible pressure on the players and make sure we stay true to our philosophies every time we play. This season we’ve got a good spirit, we’re solid, and that really helps. It’s the basis of everything.
If you don’t have that, you don’t have anything.”

The main attraction so far, however, has been 24-year-old striker Andy Delort, who has bounced back from a miserable time in England with Wigan Athletic to become one of the league’s top strikers since joining Caen in the summer.

It’s not all been plain sailing for Garande’s men and doubtless, like Angers, there will be banana skins ahead. But despite meagre resources both have fought their way into the European qualifying places – and deservedly so.

Wherever these two sides finally end up, French football has been all the richer for their unexpected arrival at the summit of the game.