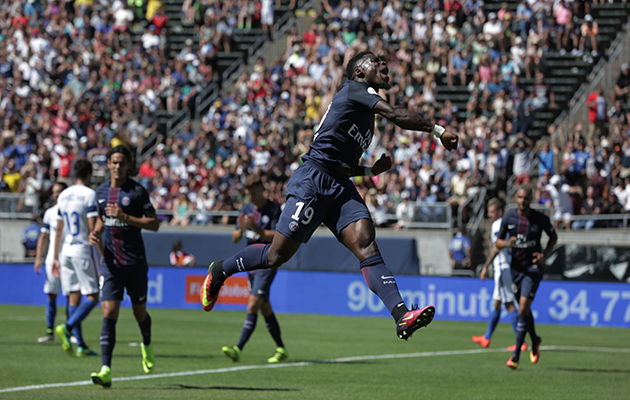 If there was ever any doubt about the size of Paris Saint-Germain’s ambitions, events at the capital club during the close season will have made matters crystal clear.

Under coach Laurent Blanc, PSG achieved a domestic clean sweep of Ligue 1 title, French Cup, League Cup and Champions Trophy last season. In the process, the club picked up 96 league points at an average of 2.52 per game, scored 102 goals, conceded just 19 and finished an astonishing 31 points ahead of second-placed Lyon. It was, by any standards, an incredible campaign. Yet this summer Blanc lost his job anyway.

Such is the hunger for European domination of the club’s Qatari hierarchy that a limp Champions League quarter-final exit to Manchester City was too much for them to stomach. Showing ruthless efficiency, chairman Nasser Al Khelaifi told Blanc to pack his bags – a big one it would have needed to be too, given the former French national coach left with a cool E22million in severance pay after signing a two-year contract extension in February.

The man on whom Al Khelaifi is now pinning his hopes is Unai Emery. The 44-year-old Spaniard has an impressive European record, having guided Sevilla to the past three Europa League titles. “Unai has a proven talent to get the best out of a team,” claims Al Khelaifi. “I’m convinced our fans will enjoy the spectacular football our team will play.”

Whether Emery will enjoy the kind of stress that goes with managing a team whose owners have such sky-high expectations remains to be seen. He’s signed a two-year deal with an option for a third, which doesn’t exactly sound like a ringing endorsement or a commitment to build for the long term. Instant success is expected, and there is clearly no financial barrier to sending a coach away with his tail between his legs if he doesn’t deliver.

Emery has been quick to remould his squad to prepare for the challenge ahead following the departure of king-turned-legend Zlatan Ibrahimovic to Manchester United and the somewhat surprising sale of full-back Lucas Digne to Barcelona. In come Polish defensive midfielder Grzegorz Krychowiak from Emery’s former club Sevilla – who should have no trouble finding his feet in Ligue 1 having already played for Bordeaux, Reims and Nantes – and Belgium’s former Club Brugge right-back Thomas Meunier, along with the much-travelled and not-a-little controversial Hatem Ben Arfa. Regarded as one of France’s most naturally gifted players, the winger arrives from Nice after his contract ran out on the south coast. Having totally failed to make an impression in England with both Newcastle United and Hull City – a situation that was hardly helped by disciplinary issues – Ben Arfa regained his appetite for the game last term and was one of Ligue 1’s star performers throughout the campaign. He’s now worn the colours of the country’s big three outfits – PSG, Marseille and Lyon – and it will be fascinating to see what he can add to the champions’ game under Emery.
The pressure is white-hot of course, and nothing less than across-the-board domestic success and a minimum Champions League semi-final spot will satisfy the club’s owners.

The big question for the rest of France’s footballing elite is whether they can make any headway in shackling PSG this season. However, given the early summer transfer activity, the answer would appear to be no. Far from improving their squads, it looks like most of the chasing pack have been weakened by departures rather than strengthened by arrivals.

Lyon have lost their impressive central defender Samuel Umtiti to Barcelona for a fee of E25m, while veteran Cameroonian left-back Henri Bedimo left for Marseille. It remains to be seen whether E50m-rated striker Alexandre Lacazette will still be around come the start of the season, with Arsenal, West Ham United and Atletico Madrid among the 25-year-old’s admirers. The French international would be a hard man to replace and would leave coach Bruno Genesio short of firepower to mount a serious title challenge.

Marseille supporters are desperate for something to cheer about in the wake of a disastrous campaign last time out that saw them finish in a pitiful 13th place. Hopes have been raised by talk of an Iranian investment fund wanting to buy the club for E100m, with a further E500m to invest in players and infrastructure. How those long-suffering OM fans would love that kind of money to wipe the smiles off Parisian faces. Trouble is, nothing appears even close to being finalised, even though Marseille current owner Margarita Louis-Dreyfus has been keen to sell since April.

Franck Passi, who stepped up to the plate when Spanish coach Michel was dismissed by Marseille in April over “behaviour concerns”, remains in charge at present and this general uncertainty hasn’t helped the club’s pre-season recruitment. They lost keeper Steve Mandanda to Crystal Palace, left-back Benjamin Mendy to Monaco, defender Nicolas Nkoulou to Lyon and star Belgian striker Michy Batshuayi to Chelsea without making any marquee signings themselves. So until the club’s ownership issues are resolved, there’s appears no chance of a Marseilles revival.

After finishing third last season, Monaco have brought in full-back Djibril Sidibe from Lille as well as Mendy from Marseille, plus Polish central defender Kamil Glik from Torino. The return of Colombian striker Radamel Falcao after a desperately unhappy time in English football, meanwhile, will be interesting if nothing else.

Elsewhere, transfer activity hasn’t exactly been frenzied. Portugal striker Eder, the man branded a flop by Swansea City who scored the winning goal in the European Championship Final against France, starts his first full season with Lille. Having impressed during a loan spell that started in February, he signed a permanent deal in May. Veteran midfielder Jeremy Toulalan has signed a two-year contract with Bordeaux, moving from Monaco to join new coach Jocelyn Gourvennec, who took charge in May. Meanwhile, veteran midfielder Steed Malbranque has signed a one-year deal with Caen after his contract at Lyon ended.

Promoted Dijon have bolstered their squad with the signing of experienced midfielder Florent Balmont from Lille, while former French international Marvin Martin heads in the same direction on a year-long loan. Fellow newcomers Metz have taken Turkish international Mevlut Erdinc, once of PSG, on another year-long loan from Hanover, all both clubs, along with Ligue 2 champions Nancy, will have few serious aspirations beyond top-flight survival.

Once again, then, the coming season is all about PSG. Can they make it five league titles in a row? Can they pull off another domestic clean sweep for the third time in succession? And, most importantly, can they really make Europe sit up and take notice?

It’s down to the best of the rest to close the gap, of course, but it is hard to imagine anyone toppling the country’s undisputed footballing powerhouse just yet.