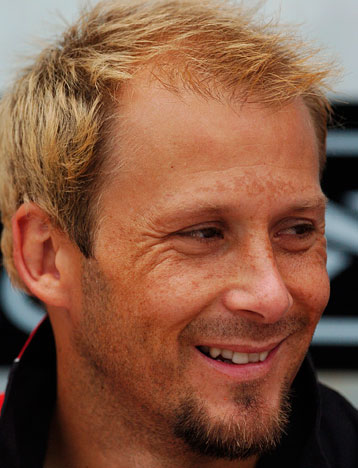 One of the most outstanding Spanish players of the pre-Euro 2008 generation was midfielder Gaizka Mendieta, now 37. Mendieta scored eight goals in 40 appearances for Spain between 1999 and 2002 including at the World Cup in Japan and Korea. He played his senior club football with Valencia, Lazio, Barcelona and Middlesbrough. He won the Spanish Cup and SuperCup as well as the English League Cup and was a Champions League runner-up with Valencia in 2000.

Q: What are the most memorable experiences from the different clubs and countries you played in?

Gaizka Mendieta (GM): Well it’s easy to talk about Valencia, it’s where I grew up, learned to play. They gave me the chance to play in La Liga, the Champions League and then achieve everything as a club and as a footballer – winning titles, playing big games. I have all good memories for Valencia.

In Italy going to Lazio wasn’t what I expected. I didn’t really get to settle in the club or in the league. That’s the reason I stayed for only one season. I felt I didn’t have the chance to really settle in the club. You see the stats and the number of games played, only 15 and 10 of them as a substitute. That shows one of the reasons it didn’t help me to settle.

Then I went on loan to Barcelona and I had a great season there. I enjoyed my time there. I loved it. Unfortunately it probably wasn’t the best time to be there as they were in a transition time – there were a lot of changes, managers, presidents, changing room, so it was only one season but I really enjoyed it.

I was on loan there from Lazio. Roberto Mancini was the manager and he was keen to keep me but some other clubs came in, one of them being Middlesbrough.

After considering for a while what to do with my future, I thought it was maybe a good idea to try a different angle – go to a club that was trying to grow, that was ambitious, that wanted to achieve things, that wanted to get big players, and I thought: ‘Why not?’. And I am really happy to that I made that decision because we won the League Cup in the first season and we played in the UEFA Cup Final so it was a great time for me.

Q: When you were growing up was there a particular player you idolised?

GM: Obviously the big players: Maradona, Pele – I grew up watching videos of them. One player I always liked because he could play in so many different positions was Ruud Gullit. He was a different type of player in his time and always one I looked up to.

Q: Do you regret that perhaps you were just too early to be part of Spain’s Euro and World Cup winning squads?

GM: Obviously, as a footballer you want to win titles, and I would have loved being part of this generation but I am enjoying this generation as a Spanish supporter! I’m glad that at last we have come to a time where Spanish football is getting what it deserves because of the way we play and the players we’ve got. Finally we’ve got our reward with these titles.

Q: Can Spain retain the Euro title this year?

GM: Certainly they can. But it gets tougher and tougher once you’ve been there. Other teams approach you in a different way, they know better your weaknesses and strengths and it becomes more difficult for Spain to win games.

Q: What do you think of the other Euro 2012 finalists?

GM: Holland is the other candidate who will definitely be in the last four or last six. They’re probably back up there at the level they were in the 1980s and 1990s.

England is probably one of the national teams going through a transition right now where its finding themselves with these young talented players, excellent players already playing in the Premier League with some of the senior players but are they going to be able to find that balance between them?

The lack of experience of some of these players in this kind of competition – compared with Spain, Holland and Germany – is a question mark. There is a lot of potential but in a short-tme competition every mistake is a big thing. We still have to find out whether this England is capable of delivering.

Q: Final testing is being undertaken on goal-line technology. What is your opinion, from a player’s perspective?

GM: Definitely it would help. As a player it will feel strange, because football is all about controversy, talking about decisions. But it has to be a good thing as it doesn’t kill the tempo of the football game because for some teams its really important in how you keep your tempo. As long as it doesn’t interfere with that, then I think it’s great.

Q: When you moved to Lazio you were one of most expensive transfers ever. Now those old figures are dwarfed by what is spent by the likes of Manchester City, Chelsea and Paris Saint-Germain. Do you think therefore that Financial Fair Play is a good thing?

GM: There are always clubs with more money – you can see it in Spain where Real Madrid and Barcelona are far ahead of everyone else – and I think it’s fair for the organisers to try to make the competition more balanced.

Clubs with money can buy anyone they want and it’s something which needed to be rebalanced from the point of view of the FAs and the organising confederations.

You can’t stop people coming into your club with a lot of money – that is what football is nowadays: it’s a business where money is a big thing. There were times when local people would love to see local players in the local team, and I love to see that in Athletic Bilbao, a team that built on local players. I think that’s great.

They’re high up in the Spanish league and hopefully, next season, they’ll be in the Champions League. They’ll have got there just with local players brought through the academy, which has cost almost zero money.

I admire that and I would love to see more clubs doing that than clubs just buying players with lots of cash.

Q: You see that sentiment in a lot of countries, as in England where local players are idolised for their loyalty – like Steven Gerrard at Liverpool.

GM: Yes, it’s what you as a kid dream of – being the football player of a club you support in your town. When a club starts to spend more money getting players from all over the world, it makes it hard for these kids to get into the club and play.

I was like that when I was at Valencia when I was 17. It was one of myh aims to get into the senior team and grow through it. You lose that when you buy a player every season and you don’t give players time to settle and be a part of the club. 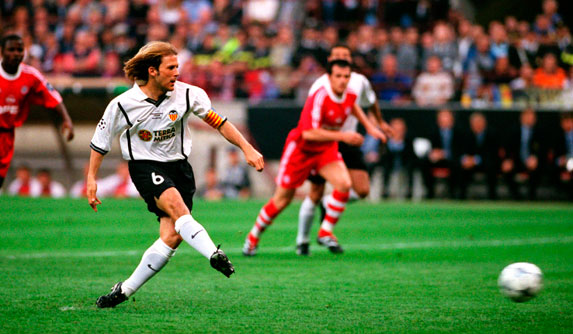 Mendieta scores for his hometown club, Valencia, in the 2001 Champions League final against Bayern Munich.

Q: Last year at Soccerex Brad Friedel said that winning an Olympic Gold Medal was on the same level as winning the World Cup. Would you agree and how important do you think Olympic Football is?

GM: I think Olympic football has been underestimated. I think it’s a big thing that should be kept for young players – to promote football and your players.

It happened with Spain when Spain won in Barcelona in 1992. Until then it hadn’t been a big thing for us. But then we won it with a great team: Pep Guardiola was there, Kiko, Cani, a big group of players who were already playing at big clubs in La Liga and this attracted attention from everyone. So I think we gained because of that.

I think nowadays, with footballers seen as athletes, they realise how important Olympics are. But as a footballer you have more opportunities to make it: in European Championships, World Cups, Copa America and so on. For track and field athletes, cyclists and other sportspersons winning at the Olympics is the biggest achievement possible. For footballers it is probably the World Cup.

Q: So what is your involvement with Soccerex later this month and how did you first get involved?

GM: I first went to Soccerex last year – I got the invitation to come to Rio and play in this tournament and I must say it was absolutely brilliant. Not just the tournament but the congress itself. I got to know a lot of people and realise how wide the world of football has become – because, as a footballer, you just think about the pitch, the stadium and the other players.

But there’s so much else involved and that’s what I realised in those weeks with Soccerex in Brazil; how important football is in so many ways which, as a footballer, you don’t realise.

Now I’m really looking forward to Manchester where I’m going to be part of one of the panels. I’m looking forward to sharing my experiences as a player in Spain, Italy and England and talking about the impact that the media has and social networks has had on football and how it’s changed.

Q: Is there any charity work that you are involved in at the moment?

GM: Yes, five of us are setting up football academies where we want to be a charity foundation and help players not just in England but also in Spain. We want to help these teenage players improve as players but also as human beings. Make them realise that football is important but there is also more to do in the world of football.

Hopefully we will see this come true very soon, we will hopefully announce more about this in the next few months.

From my experience as a footballer in England, I noticed that the gap from 15 to 16 year old players to 18 to 19 year olds they struggle to make this transition from non-professional to professional player.

Because the lack of competitive tournaments; they don’t have enough opportunity to play and improve. So we want to get these players maybe to Spain and let them play in the Spanish leagues so they get the experience, and the minutes needed to improve their football.

Q: Do you think footballers should do more charity work when they are playing?

GM: Definitely, and I think nowadays players are more conscious about it. Footballers are examples for kids especially, so they should help as much as they can in their busy agendas for people who are more needy. It’s something every player should build into their daily commitments because it would definitely help kids and other players.

Q: Do you think it’s harder when a lot of these players are plucked out of school and their homes from a very early age and shut off from the wider world?

GM: People don’t realise these things – they only think you are just a football machine, you go and play and make loads of money. And in some ways that’s right, because we are very lucky to be footballer and you can dedicate your life to that and do what you love the most.

But there is another side to that: most of the kids who become players have to leave their homes, have to stop studying, have to live in a bubble and just do football. It’s a very nice profession but there are drawbacks.

** Gaizka Mendieta was talking ahead of the Soccerex European Forum in Manchester on March 28 and 29. He will take part in a panel exploring the impact and influence the traditional media has had on the growth of the football industry. To see this year’s full programme, visit:
http://www.mysoccerex.com/EF12_Conference_Programme.pdf