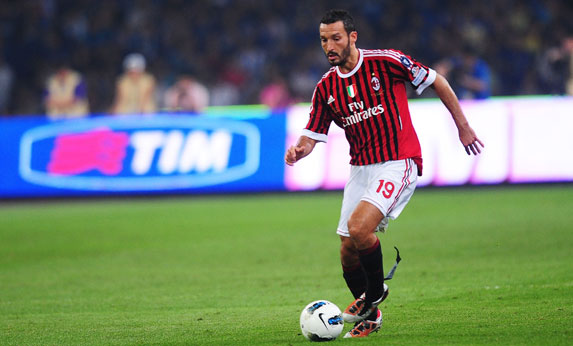 World Soccer: You’ve played at the top level in European club football with Juventus, Barcelona and Milan. What are the differences between these great clubs?

Gianluca Zambrotta: I think that a big club is a big club even if it is in a different country and these are three of the most important teams in the world. I can genuinely say that there are no distinctive or obvious differences between them – apart from at Barcelona, who tactically have a different, clearly defined style of play and a contrasting, more attacking approach to the game.

You played at Barcelona before
Pep Guardiola turned them into the all-conquering side they are today. What was your impression of the Barca side you played in?

I played in Catalonia between 2006 and 2008 and it was a pleasure. The first year we ended on the same points as Real Madrid but lost La Liga because of the results of our head-to-head matches. The second season we reached the Champions League semi-finals and lost against the eventual winners, Manchester United.

But, sadly, two seasons without winning important trophies are two unsuccessful years for a club like Barcelona. These were Frank Rijkaard’s final days as
coach, but even then I had an idea that something special was growing with that group of players.

You joined Milan in the summer of 2008. What were the tactical changes that you had to get used to?

For me, personally, almost nothing was different when I arrived in Italy from Spain. It is true that the style of play wasn’t the same, but my job was identical. I have always played in a defensive back four, either at left-back or at right-back, so I did not find it difficult to adjust. A tackle is still a tackle no matter which country or league you are playing in.

You won a lot of Serie A titles with Marcello Lippi and Fabio Capello at Juventus. After more than five years, what is your opinion today about the Calciopoli scandal of 2006?

I am quite bored with Calciopoli. There has been far too much talking. I say every time that I have won five Scudetti in my career: four with Juve and one in Milan.

Why are so many veterans playing at Milan? What is the secret of players such as Clarence Seedorf, Filippo Inzaghi and, before them, Paolo Maldini and Franco Baresi?

There are no particular secrets, but the management at Milan is excellent and they know perfectly how to look after professional footballers. Every aspect, both on and off the pitch, is considered with great detail. As a player at Milan all you have to do is think about football, and that is a kind of heaven for every player. You also need to be very professional by looking after yourself and those footballers you mentioned are highly dedicated.

Who are the best full-backs in the world at the moment?

On the right I like Dani Alves of Barcelona, and the other special full-back is his fellow Brazilian, Maicon, who has now had several excellent seasons with Internazionale. I would also mention Ignazio Abate, who is one of the most promising youngsters at Milan. On the left-hand side I have liked Ashley Cole in recent years, but since his emergence there have been no other players who have truly excelled at left-back. I think that Gareth Bale of Tottenham Hotspur is very good but he is maybe more of a midfielder than a defender.

Would you prefer to win another Scudetto with the Rossoneri or bring home the Champions League trophy?

The Champions League, definitely. I have never won the European Cup. I lost a Final in Manchester, when I played with Juve against the Rossoneri, on penalties in 2003. Since winning the World Cup, the one I want most to get my hands on before retirement is this most important of club trophies. I think the Champions League is important for Milan too because they can earn more money from it. That said, last year we were very happy about winning the Scudetto after five years of Inter dominance.

What are your plans for your life after you retire from playing?

I have already opened a sporting complex in my home town of Como. I have always maintained a strong bond with my birthplace and that will continue. I remember that in the summer of 2006 I organised a party on the lakeside during which I showed the World Cup trophy to the people of Como. I think that I will work with youngsters in my sports centre, where we have many football pitches, a swimming pool and a gym. That is my plan.

You have had a glittering career, but which game do you consider to be your best-ever performance?

We have to go back to the World Cup in Germany, in 2006, and more precisely to Hamburg, where we played our quarter-final match against Ukraine. I scored the first goal and I made an assist for Luca Toni, who netted the second. We won 3-0, we reached the semi-final and I was extremely proud of my performance that day. I also played a good match last season in the derby game against Inter, in April, when we won 3-0, but I think the World Cup quarter-final was definitely my best ever. I still smile when I think of it.