“Operation Leadership,” they called it, but the mission failed, run aground against Carlos Kameni before news from Madrid, 600km away, made it even worse. On Saturday morning, they had hoped that Barcelona would be top; by Saturday night, they were four points behind instead. The tilted Madrid-wards on the weekend they thought it might lean the other way. A 0-0 draw with Málaga at the Camp Nou was followed by Real Madrid’s 3-0 victory at the Calderón.

There was something familiar about it; someone familiar too. It is not just that Barcelona’s football has lacked the flow, speed and incision of previous seasons, not just that Leo Messi and Luis Suárez were missing, and not even that centre forward Paco Alcácer went thirty-one minutes without even touching the ball, let alone putting it in the net; it is that standing before them was the former Espanyol goalkeeper who has a bit of a thing about them.

As he took up his position in goal, fans “reminded” Kameni of his past at their city rivals Espanyol. When he departed, he did so thumping his chest, having stopped them once more. There was no way past him, with one save in stoppage time especially standing out. Even watching it back, it astonishes.

For the first time in 32 Camp Nou matches, Barcelona had failed to score. The first time, in fact, since … well, since Kameni last kept a clean sheet against them. 637 days and many goalkeepers had passed. When Kameni came back, they could not. 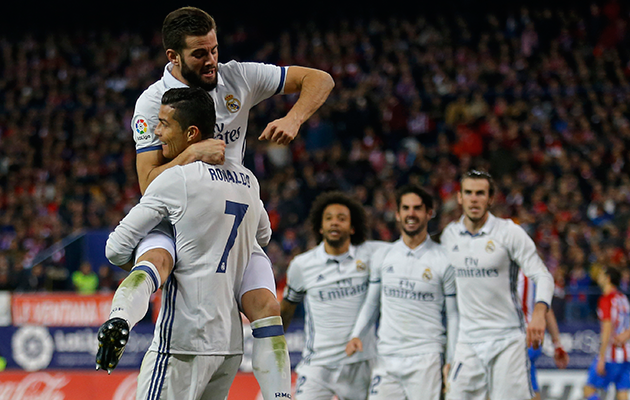 Cristiano Ronaldo and his Real Madrid team-mates celebrate their 3-0 victory over rivals Atletico.

“It’s not that the BBC are non-negotiable, it’s that they’re the best,” Zinedine Zidane said. The question, which is a recurring one anyway, was posed on the eve of Madrid’s meeting with Sporting in Lisbon because things had gone so well at the Calderón – on the night when, unusually, he played without a front three of Bale, Benzema and Cristiano. For the first time in six games, Madrid won a city derby in  the league, defeating Atlético 3-0 on their last visit (barring a meeting in  the cup or the Champions league) to the Vicente Calderón, which will be bulldozed at the end of the season.

With the Frenchman just returning from injury and Álvaro Morata missing through injury against Atlético, they were not outnumbered in midfield. Bale was on the left, from where he provided an assist; Lucas Vázquez was on the right, from where he was fouled for the free kick that brought the first goal; and behind the striker was the star. Isco played in what Zidane admitted was his “best” position, and one that normally doesn’t exist in the way they set up. He was superb. Up front, Cristiano Ronaldo wasn’t bad either, scoring another hat-trick.

Asked if the change in positions was definitive, Zidane said: “no.” Asked if Madrid had taken a decisive step, having left Barcelona four points behind and Atlético nine, he said: “no, not at all.”

For the first time ever in primera, Butarque was not full. And for the first time ever in primera, Butarque saw its team emerge victorious. A Monday night in Leganés and the top flight’s newest team beat Osasuna 2-0. It was a relief. Although they had won away, this was their first home win, six weeks in. Which is perhaps less surprising when you see the teams they have faced: Atlético, Barcelona, Valencia, Sevilla, Real and Sociedad. Oh, and Real Madrid away. Not exactly a nice, soft landing.

Valencia were playing Granada at Mestalla, and the owner’s daughter was at the game. Just not that game. Instead, Kim Lim was at Manchester United-Arsenal – and it didn’t go down well with some fans on the day that their team performed poorly, again, and Mestalla whistled. Some even chanted for Peter Lim to leave. Others took to Kim Lim’s Instagram account to complain, many of them in pretty unpleasant terms. Kim was not impressed: “Some fans are mad and stupid if they think they can control me,” she said. “open your eyes and your brains … maybe it’s your knowitall attitude that is the reason the club is like it is … the fact is, we’re still the owners of the club.” 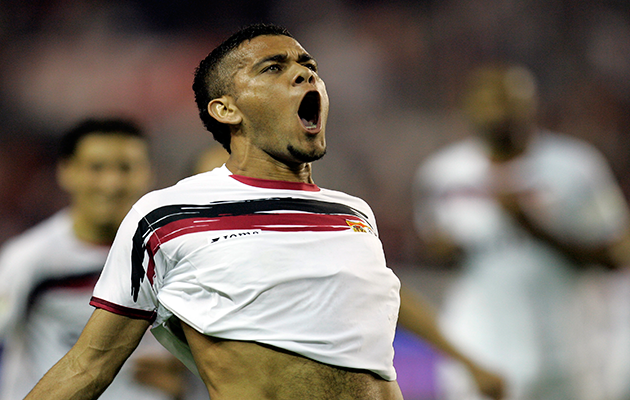 Dani Alves back when he was a Sevilla player.

On the corridor at the Sanchez Pizjuán is a goofy-looking photo of the player that many think was the best there’s ever been at Sevilla – from right back. He long since left, raising a total of 45m euros for the club, but tonight he will be out there on the pitch, playing for Juventus.

“A good son always comes home,” Dani Alves said, “even if it is only to visit.”

Sweden to erect statue in honour of Zlatan Ibrahimovic