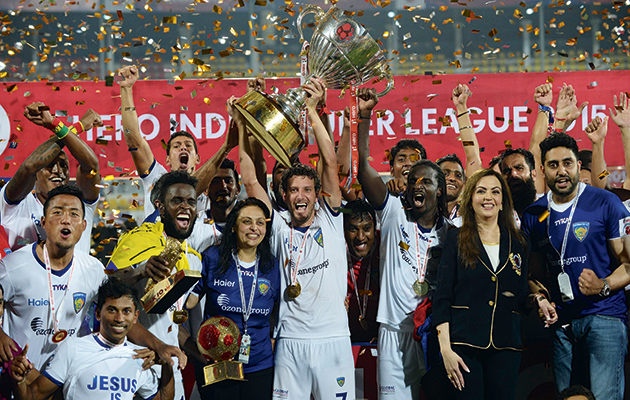 The Indian Super League (ISL) kicked off at the start of October ahead of a dramatic shake-up that will see it usurp the I-League as
the country’s main competition, perhaps as early as 2018.

In May, the All India Football Federation (AIFF) unveiled plans to add two more sides to the eight-team ISL, which will then become a national top flight with no relegation to the I-League, which will become the second tier. And while the AIFF’s vision has not been universally acclaimed, there is little doubt that the I-League, which was established in 2007, is struggling with attendances as low as its profile.

I-League clubs complain that IMG-Reliance, the AIFF’s commercial partner, have not done enough to promote their competition. But while that is a matter for debate, what is not is that IMG-Reliance have been a major driving force behind the ISL.

The ISL has everything that its older brother does not, with its eight franchises owned by intriguing combinations of businessmen, cricket stars, European football clubs and Bollywood actors. And while that initially put the competition in the news, the arrival ahead of the big kick-off of players such as Alessandro Del Piero and Robert Pires, and coaches Zico, Marco Materazzi and David James, helped to keep it there.

The average attendance that first season was over 24,000 and grew to more than 27,000 in 2015. The Indian media never tires of referring to it as the fourth most-watched football league in the world.

Originally, the ISL was touted as a complimentary competition that the I-League would supply with players during in its close season. As well as increasing earnings for the players, the ISL was supposed to help improve the facilities for all – something that has held the domestic football scene back over the years.

Yet, with its average attendance more than five times higher than that of the I-League, the ISL always had a chance of becoming number one. The I-League may have historic clubs such as Kolkata giants East Bengal and Mohun Bagan – whose derby can attract 100,000 fans – but even they struggle to compete with the stars of Delhi Dynamos and Mumbai City.

To make matters worse, the 2015-16 I-League featured just nine teams after three withdrew. Pune and Bharat cited a lack of long-term vision, with Royal Wahingdoh following suit in what was a major blow and helped smooth the way for the AIFF’s proposal.

Fans of the ISL won’t care too much as they prepare for another season of marquee signings and a mixture of foreign and local talent. And if the 2016 season starts in a similar vein to how the 2015 campaign ended, they will be in for a treat.

Goa and Chennaiyin met in the Final in front of almost 20,000 fans and with three minutes remaining, Zico’s Goa took a 2-1 lead. However, two injury-time strikes from Chennai, led by Materazzi, gave the visitors a first title.

Zico and Materazzi are back this season, while Gianluca Zambrotta has taken charge at Delhi Dynamos. And there is a British flavour at Kerala Blasters, who finished last in 2015, with Steve Coppell taking the reins of a side that has Northern Ireland veteran Aaron Hughes as the marquee and Michael Chopra up front.

While the ISL champions will be determined in December, the questions of how the future of Indian football will be organised will take longer to settle.

The AIFF and Asian Football Confederation set up a joint task force in August to answer questions such as how can Mohun Bagan and East Bengal co-exist in Kolkata when playing at the same time as ISL team Atletico de Kolkata? And how will the short-term ISL, in which some owners are struggling with financial losses, extend to become a genuine season-long competition?

Those problems may take a while to resolve, but for the next few weeks attention up and down India will be fixed firmly on the third edition of the ISL.