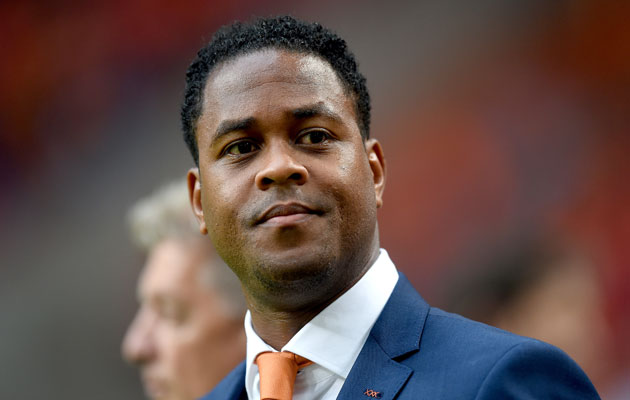 • Patrick Kluivert, who worked alongside Louis van Gaal as Holland finished third at the 2014 World Cup in Brazil, has been handed his first senior managerial role as coach of Caribbean minnows Curacao.  The 38-year-old’s reign will begin with a two-leg first-round World Cup qualifier against Montserrat at the end of this month.

Former Ajax and Barcelona star Kluivert worked alongside Louis van Gaal at the helm of the Netherlands national team between 2012 and 2014, helping guide the side to a third place finish at the summer’s World Cup in Brazil.

He was tipped for a reunion when Van Gaal took over the reins at Manchester United, but the Dutchman opted to appoint Ryan Giggs as his deputy.

• Republic of Ireland centre-half Sean St Ledger, 30, has joined MLS newcomers Orlando City on the eve of the new season.

• Romania’s most-capped player Dorinel Munteanu, who made 134 appearances for his country between 1991 and 2007, was appointed coach of Astra Giurgiu, who sacked Oleg Protasov after less than five months in the job.

• Former Valencia and Internazionale boss Hector Cuper has been named coach of Egypt’s national side.

The much travelled Cuper led Valencia to the Champions League final in 2000 and 2001, and in 2003 he finished third in Serie A with Inter – losing the title on the last day of the season.

• Edy Reja, who had been out of work since parting company with Lazio last year, replaced Stefano Colantuono as coach of Serie A strugglers Atalanta.

• Ex-Algeria coach Vahid Halilhodzic has agreed to take charge of Japan. The appointment is expected to be rubber-stamped on March 12.

• Former international midfielder Aliou Cisse was appointed coach of Senegal. The 38-year-old, who won 35 caps for his country, takes over from Alan Giresse, who left after the recent African Nations Cup.

• Estoril, who lost 6-0 to Benfica at the weekend, dismissed coach Jose Couceiro after five Portuguese league defeats on the trot.