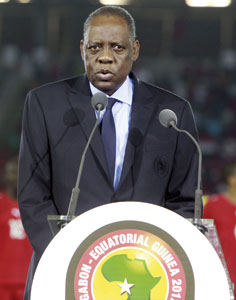 Visibly ageing and increasingly ill but still the consummate politician, Issa Hayatou has secured himself a further term at the helm of African football which will take his reign as Confederation of African Football (CAF) president to close on three decades.

Strong man Hayatou has seen off he challenge of potential rival Jacques Anouma more than six months before the pair were due to go head-to-head in elections in Morocco next March. It will ensure him another four-year term, until 2017, making it almost 30 years in office for the 66-year-old Cameroonian.

To make safe his bid, Hayatou called an extraordinary congress in the Seychelles and easily passed a new rule that dictates future presidents can only be chosen from the ranks of the voting CAF executive committee members. Anouma, from the Ivory Coast, is a committee member but only by virtue of the fact he has an automatic place on the African body because he serves as one of the continent’s representatives on the FIFA executive. He has no vote on the CAF body and is thus disqualified from next year’s election.

Anouma would have been only the third contender to take on Hayatou. The previous two elections were thrashings, first against the eccentric Armando Machedo of Angola in 2000 (who got four votes to Hayatou’s 47) and the second versus Ismail Bhamjee of Botswana (46-6) in 2004.

But Anouma might have been a more credible challenger, especially with the support of his government.

He had been a close confidant of the ousted Ivorian president Laurent Gbagbo, now standing trial at the International Criminal Court in The Hague. In the wake of Gbagbo’s ousting, and the civil war it took to achieve it, Anouma stayed away from his home country, only recently returning to seek rapprochement with the new authorities.

He had once been Sepp Blatter’s anointed alternate to Hayatou, and with the heavyweight assistance of the FIFA president and his lieutenants he had succeeded in engineering the election of several allies to the CAF inner sanctum against Hayatou’s wishes.

But Blatter and Hayatou – rivals for the FIFA presidency in 2002 – have since patched up their differences, Anouma’s allies have headed for the hills and Blatter’s hand was much less visible in the last round of executive committee elections.

* This is an excerpt from a profile on Falcao. The full article is available in the October issue of World Soccer.