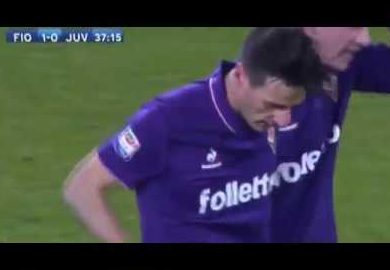 Whatever else he achieves in Florence, Portuguese coach Paulo Sousa has assured himself a place in the Fiorentina Hall of Fame following Sunday night’s 2-1 home win against champions Juventus. This was only the Florence side’s third Serie A win against their loathed rivals in the last ten seasons so, inevitably, there was a deal of celebration in the great Tuscan city on Sunday night.

Down in Rome and Naples, too, the fans had reason to be grateful to Fiorentina as this unexpected defeat puts Roma just one point behind Juventus (who have a game in hand) and leaves Napoli four points behind them in third. Given that Juventus are away to Crotone on February 8th for that outstanding feature, it is only reasonable to conclude that normal Serie A service will soon be restored , with the Old Lady putting an extra three points between herself and her rivals.

However, one is left with a nagging little suspicion after this fourth league defeat of the season (the others came against Inter, Milan and Genoa). Has Juve’s thus far triumphant progress in Italy this season, sometimes against sides which frankly set out to limit the damage, masked at least one serious problem.

With Higuain, Dybala, Mandzukic up front and with Buffon, Barzagli, Bonucci, Chiellini, Dani Alves at the back, this current Juventus looks pretty useful both in attack and in defence. However, what about midfield? There have been moments this season when the Juventus midfield has appeared to badly miss both the playmaking qualities of Pirlo and the creative dynamism of such as Paul Pogba and Arturo Vidal.

Pirlo and Vidal, of course, left the club two seasons ago but with Pogba now gone too, Juventus sometimes look as if they are missing a truly guiding light in midfield. So far, the man who was supposed to turn on that light, Bosnian Miralem Pjanic, has been intermittent, sometimes very influential but also sometimes not able to impose himself on a game.

It could be argued, however, that on Sunday against Fiorentina, Juve badly missed even the “intermittent” Pjanic, who did not play for injury related reasons. Fiorentina looked sharper and more hungry as they played their “game of the season”, a point underlined by the match stats which showed that they had more shots on goal, committed more fouls and won more 50-50 midfield balls than Juventus.

In all probability, this defeat will prove to have been but a momentary hiccup on Juve’s road to a record-breaking sixth Serie A title. However, does it suggest that the Old Lady is not quite battle-ready as far as the Champions League is concerned? As for their closest league rivals, Roma, Napoli and Lazio, all three picked up important wins, against Udinese, Pescara and Atalanta respectively to at least preserve the illusion of a Serie A title “contest”.

Mind you, those considerations take nothing from a Fiorentina side whose class and overall quality belie its current league table standing, in eighth place. Sousa is an excellent coach, clearly destined for one of Europe’s “biggies” one day. On top of that he can count on two real gems in Croat Nikola Kalinic and 22-year-old Federico Bernardeschi in attack, as evidenced by their brilliant combination for Kalinic’s opening 37th minute goal (Croat Milan Badelj scored the other in the 54th minute).

Add in a useful midfield featuring Spanish schemer Borja Valero and Uruguayan Matias Vecino and seasoned campaigners, Davide Astori and Argentine Gonzalo Rodriguez in defence, then this remains a very handy unit. Sousa was also probably right when he said after the game:

“If we play with this level of conviction, everybody is going to struggle against us.”

Two of the great iconic figures of modern Italian football, namely Francesco Totti and Argentine Diego Maradona, have been making news this week, too. 40-year-old Totti came on for the last half hour of Roma’s 1-0 win away to Udinese. Having been given a standing ovation by the Udinese fans, Totti within 30 seconds delivered a trademark perfect through ball for Belgian Radja Nainggolan that very nearly started off the great man’s 25th year in professional football on a fairytale note. (Totti’s debut came in March 1993 as a 16 year old when old fox Vujadin Boskov brought him on for the last few minutes of a Brescia v Roma Serie A game).

One hopes that there will be more Udine-type, Totti Farewell moments in the second half of the season as fans from all over Italy get a chance to express their appreciation of one of the great Italian talents of the last 25 years.

On the same note, down at Naples, they have never been slow to express their continuing attachment to Argentine Diego Maradona, a player who left the club like a thief in the night some 26 years ago. Notwithstanding all his various vicissitudes, Napoli fans just love Maradona, the little genius who led them to their only two league title wins in 1987 and 1990.

To celebrate the 30th anniversary of that historic 1987 title win, Maradona on Monday night featured in a commemorative show, organised around him and held in Naples’ San Carlo opera house with city mayor, Luigi de Magistris, Napoli owner, Aurelio De Laurentis and players past and present all in attendance. Tickets, many costing €300 euro, were sold out for a show in which the great man did not disappoint his admirers:

“People have said these tickets are too expensive at €300 euro. But I heard that Pele was doing a show and that he was charging €200 euro a ticket, so I had to put the price up…That fellow must always finish second…”, he said for starters.

Having blasted Michel Platini, Sepp Blatter, Gonzalo Higuain and other regular “targets”, Maradona rounded off his night by suggesting that the current Maurizio Sarri coached Napoli is good enough to one day win the Serie A title again. That is surely a good thought for the New Year.