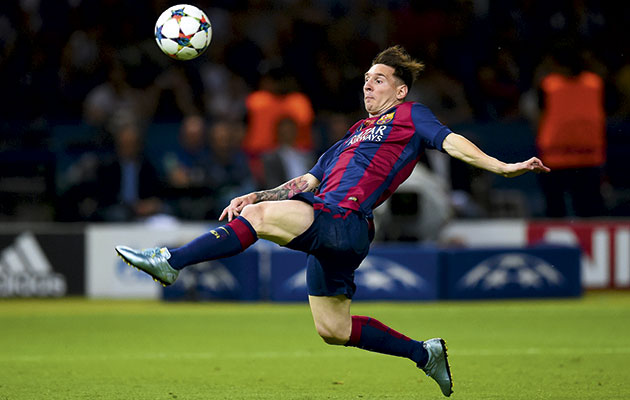 A year on from Argentina’s defeat in the 2014 World Cup Final, Lionel Messi is back on top of the world.

The Barcelona and Argentina star is World Soccer’s Player of the Year
for a record fourth time, having previously won the award in 2009, 2011 and 2012.

Messi’s victory in 2015 means he overtakes his great rival Cristiano Ronaldo (winner in 2008, 2013 and 2014) and his predecessor at Barcelona, the Brazilian Ronaldo (1996, 1997 and 2002).
Debate will, of course, rage as to who can lay claim to the title of the world’s greatest-ever player. While Argentina’s defeat in Brazil has ensured that World Cup winners Pele and Diego Maradona can still keep a hand on the crown, Messi did everything possible in 2015 to remind the world of his brilliance.

A hugely impressive treble of Champions League, La Liga and Spanish Cup was complemented by the European Super Cup and, at the year’s end, the Club World Cup. The only cloud on Barcelona’s horizon was a defeat to Athletic Bilbao in the Spanish Super Cup. Even then, there was a silver lining as Messi’s goal in the second leg, albeit with Bilbao having taken a four-goal lead from the first leg, was one of six competitions in which he scored in 2015. It was the second time in his career, after 2011, that he had scored in six different competitions in the calendar year.

Yet Messi began the year under a cloud. Amid reports of a clash with coach Luis Enrique on the training ground, he was missing from Barcelona’s traditional January open-training session. The official line was that the Argentinian was sidelined with “gastroenteritis”, but midfielder Xavi inadvertently let slip in a pre-recorded interview that the aforementioned illness was used by club officials as “an excuse for when something else is going on”.

Off the pitch, Messi and his father, Jorge, were having a testing time at the hands of the Spanish tax authorities. The Spanish media were briefed that he might be prepared to quit Spain as he felt he was being singled out for special treatment compared with other elite sports players
in the country with disputed tax affairs.

Messi had his first run-in over tax in 2013 when he was accused of concealing €4.1million earned from image rights in shell companies in Belize and Uruguay. He paid an agreed €5m in settlement but the authorities indicated they intended to pursue him further.

In October 2015, Spain’s public prosecutor dropped tax-fraud charges against him but his father may still stand trial over the allegations.

By then, his form on the pitch had reached new heights.

An incredible goal in the 2015 Spanish Cup Final against Athletic Bilbao, when he took the ball from almost the halfway line, past four defenders before shooting past the keeper, brought comparisons with his 2007 goal against Getafe, itself a moment which had seen the teenage Messi compared with Maradona.

Victory over Juventus followed a few days later in the Champions League Final in Berlin, although the limelight was taken, for once, by his team-mates Neymar and Luis Suarez.

A knee injury in September made him a doubt for the classico against Real Madrid in November. By the time he appeared as a 57th-minute substitute, Barcelona were already three ahead and heading for a 4-0 thrashing of their great rivals.

And at December’s Club World Cup in Japan, he scored the opening goal against River Plate in the Final – the first time in his career he had scored against an Argentinian side.

On a personal level, Messi is one year into a five-year contract with Barca that pays him £16m a year.
In September his partner, Antonella Roccuzzo, gave birth to a second son, Mateo, a brother for Thiago.
On and off the pitch, life could not get much better.