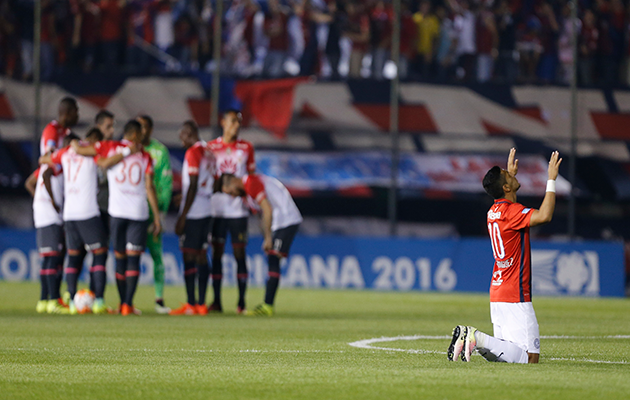 An atmosphere of almost religious hysteria has surrounded Cerro Porteno’s path to the semi finals of the Copa Sudamericana.  Players have been breaking down in tears after scoring goals as, round after round, waves of pure emotion have made themselves felt from the stands of the Defensores del Chaco stadium.

True, this is only the equivalent of the Europa League.  But even so, coming within sight of the trophy is big news indeed for arguably Paraguay’s most popular club.  Formed in 1912, they have mass support, perhaps a little more than their eternal rivals Olimpia, who are more identified with the country’s elite.

But Olimpia are the ‘cup kings.’  Three times they have won the Copa Libertadores, South America’s Champions League – only four clubs have won it on more occasions.  Olimpia, then, are continental giants.  Cerro Porteno, meanwhile, have never got their hands on an international trophy, and the frustration grows with the years.  They have made the Libertadores semi finals on a few occasions – most recently in 2011, when they fell to eventual champions Santos of Brazil.  But this time there is a belief that destiny might be with them.

Their Sudamericana campaign began inauspiciously, a goal down to Fenix of Uruguay after just three minutes in the first round.  And they appeared to be heading for penalties as the second leg went into stoppage time with the teams level on aggregate – until centre forward Pablo Velasquez settled things in their favour in the 93rd minute.

The next round was a breeze against Real Potosi of Bolivia.  Cerro won 6-0 at home and 1-0 away – gentle preparation for the challenge of taking on the Colombians.

First came reigning Sudamericana champions Santa Fe.  Cerro Porteno went down 2-0 in the first leg in Bogota, a result that left them dangerously exposed to the away goals rule.  Sure enough, Cerro quickly cancelled out the first leg deficit and then put themselves 3-0 up – but a 77th minute Santa Fe penalty looked to have decided matters – until Cecilio Dominguez completed his hat-trick with just two minutes to go and Paraguay (with the exception of Olimpia fans) began to believe once more. 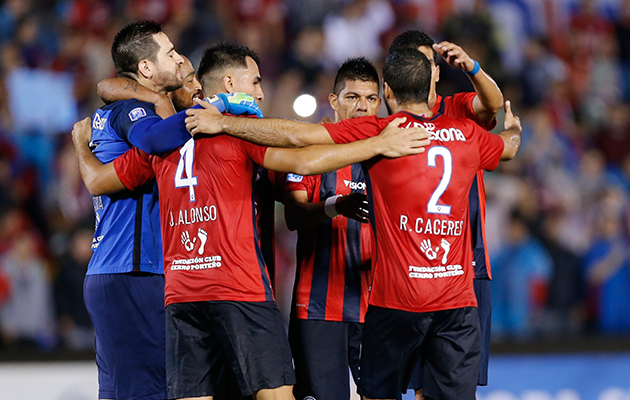 Then in the quarter finals came Medellin, where Cerro Porteno fought a rearguard action to secure a 0-0 draw in the first leg.  Back in Paraguay Medellin missed some chances to snatch the vital away goal, and were punished by Dominguez, who scored both goals in a 2-0 win.  Cutting in from the left, he has been a constant threat, working well with the lanky, left footed Velasquez, while Roberto Rojas provides thrust from central midfield.

Cerro will look for all three to be on their game this Tuesday, when they face another Colombian challenge in the semi final.  This time it is the strongest one of all – reigning Libertadores champions Atletico Nacional.  And this time Cerro are at home in the first leg, with the pressure on them to build up a lead to defend in Medellin on November 24th.

The Paraguayans can perhaps count on one advantage.  If winning the Sudamericana means everything for them, taking part in the competition might even be something of an inconvenience for their opponents.

Atletico Nacional already have the Libertadores, by far the continent’s main event, in their trophy room, which means they are building for the honour of representing South America in the Club World Cup in a few weeks’ time.  And the Colombian calendar is unforgiving with sides taking part in the closing stages of the continental club competitions.

Nearing the end of the league season, Nacional are currently top of the domestic table.  But that wins them nothing.  The leading eight sides qualify for the play-offs, meaning that the decisive knock-out games will be coming thick and fast.  In addition, at some point they will have to fit in the two legs of the final of the domestic cup against Junior of Barranquilla.  And they have paid the normal price for success in South America; the Libertadores campaign put players in the shop window and so they have lost some key members of their side.  Coach Reinaldo Rueda has depth in his squad, and is trying to take the strain on his men by resting players when he can.  But all of these games must be taking a toll.  Maybe Cerro Porteno can take advantage, and keep their dream alive all the way to the final.