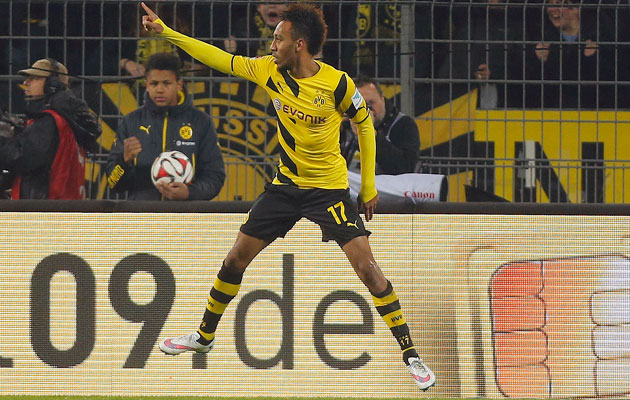 1) Any Dortmund recovery will pass through the vapour trail of Pierre-Emerick Aubameyang.

The effervescent Gabon frontrunner has been directly involved in 10 of Dortmund’s last 15 Bundesliga goals (six scored and four created) and was again prime time on Saturday, netting twice and setting up another for Marco Reus as the “Schwarz-Gelb” took a deep gulp of anti-relegation oxygen by comfortably prevailing 3-0 at Freiburg.

It was only the fifth win of the season for the misfiring Westfalen giants. Aubameyang was preferred in the lone striker role to the under-achieving Italian, Ciro Immobile and his pace, virtuosity and predatory instincts had the Freiburg back-line tied up in knots all game long.

If he is right in his analysis that Borussia’s problems this term are almost entirely psychological, he seems the best equipped to play Freud.

2) Hertha Berlin are not buried yet

Hertha general manager, Michael Preetz. his patience eroded by three straight defeats, not a whiff of a goal and real fears of relegation tion, saw no other option but to tell Dutch head coach, Jos Luhukay to clear his desk last week.

With new caretaker boss Pal Dardai immediately signing on with a fine 2-0 win at Mainz, the decision to execute regicide looks an eminently sensible one. Players who were going through the motions under Luhukay suddenly appear to have fire in their bellies and though Mainz did gift them both goals with crass defensive work, Hertha’s spirit, unity, determination to win tackles and ability on the counter, will have buoyed all connected with the capital city club.

A battler of a midfielder, who served Hertha loyally for 14 years (1997-2001), ex-Hungarian international Dardai says he “doesn’t do miracles”, but just might be selling himself short.

3) Andre Schurrle is worth the money

While several German pundits are of the opinion that Wolfsburg paid well over the guide price when acquiring the Nationalmannschaft attacker from Chelsea recently in a whopping 32 million euro deal, actions speak louder than words.

On his debut for the Lower Saxon outfit, the 24-year-old came through with flying colours, setting up the first two goals in the 3-0 home thumping of Hoffenheim and constantly destabilising with his speed and directness both wide on the left and in diagonal sprints towards goal.

In marked contrast to Chelsea manager Jose Mourinho – who generally found the young German a little too naive in his tactical appreciation and too inclined to hang onto the ball – Wolfsburg coach Dieter Hecking is only interested in what the ex-Mainz and Leverkusen star can do and that means breaking forward at pace and offering a deep threat.  Job done.

Although Di Matteo’s Schalke are not exactly wooing the gallery with bright and inventive football, the Gelsenkirchen side certainly have hit upon a formula to produce results. Thanks to a seven-point haul since the New Year restart, they now occupy third place in the Bundesliga.

Just as he did when leading Chelsea to Champions League glory in 2012, Roby the Ringmaster’s blueprint for success is pure catenaccio. Whether it be league leaders Bayern Munich – whom they held to a 1-1 draw at the Allianz Arena last week – or highly-rated Gladbach, beaten 1-0 in the Ruhr on Saturday, opponents are finding it exceedingly hard to combat the tactical discipline, physical strength and sheer opportunism of the ultra-functional Royal Blues.

Despite the disappointment of letting slip a two-goal lead at home to Eintracht Frankfurt on Sunday and having to make do with a single point from a 2-2 draw, the unfashionable Bavarians still have plenty to feel good about.

Forced to exist on a miniscule 17 million euro budget – the second smallest in the top flight – Markus Weinzierl’s enterprising and well-organised collection of cast-offs and unknowns currently sit a lofty fourth in the table and given their propensity for winning tight games, must be in with a good chance of qualifying for Europe for the first time in history.

From their all-or-nothing approach on the pitch (11 wins, eight losses and only one draw) to the insistence of chairman Klaus Hofmann that football would be better off without TV money, FCA make for a refreshing change.