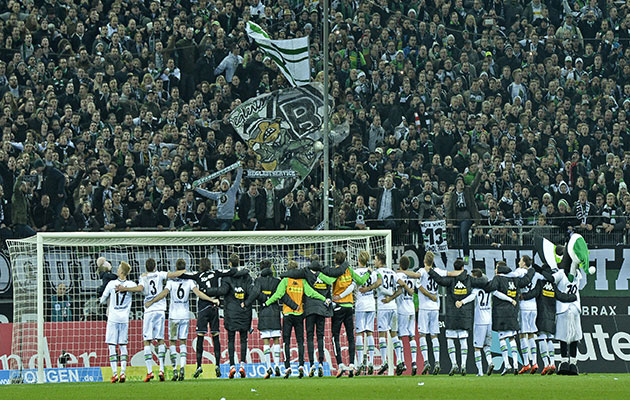 Tasting defeat for the first time this season, Bayern Munich’s 3-1 reverse at in-form Gladbach, was not only was an early Christmas present for those driven to despair by the Bavarians’ one-party rule in the Bundesliga. It also meant overtime for the statisticians, who, with calculators and calendars at the ready, tore into the numbers behind the shock result.

The unique sight this term of Bayern conceding more than once and failing to keep a second-half clean-sheet and the once-in-a-blue-moon instance of rotation king Guardiola keeping an unchanged side, the first time he had done so in 99 fixtures.

If Bayern’s dream of the perfect, undefeated campaign now lies in tatters, they only have themselves to blame. In a goalless first-half, they spurned a number of goalscoring opportunities  and after the restart, almost completely disintegrated, playing too high a defensive line and all at sea when their opponents upped the tempo and let the counter-attacking dogs loose.

An afternoon to forget for the champions, but at least they had one item of good news: Franck Ribery returning to the first team squad after nine months out with an ankle injury and coming off the bench to net his side’s late consolation.

2. Dortmund prevail in the battle of the Bundesliga crown princes
With league leaders Bayern slipping up at Gladbach, the clash in Wolfsburg, a couple of hours later, of the third-placed hosts and national number two, Dortmund, took on even more significance and what a close-run affair it was, the visitors eventually edging it 2-1 courtesy of a Shinji Kagawa goal deep into injury time.

Thomas Tuchel’s slick and resilient charges are now ‘only’ five points adrift of Bayern and while no one at the Westfalenstadion is crowing about a possible tilt at top spot, such a vital away win – Wolfsburg’s first home zero in 30 games – can only be good for the Yellow-and-Black soul.

Tuchel, though, will have to keep a cooler head, sent-off in the wake of  Kagawa’s winner for an offensive gesture at a Wolfsburg assistant.

3. Art for points sake
Six months in the making, the spectacular terrace tableau which Schalke fans unfurled in the build-up to Friday night’s home game against Hannover certainly had the desired effect, inspiring the Royal Blues to a 3-1 victory, their first Bundesliga win in six attempts.

Consisting of four huge banners representing four key moments in the club’s history, the stunning pre-match show proved the ideal rallying cry for the out-of-sorts Gelsenkirchener and afterwards, the players could not thank their in-house artists enough.

“We checked out the display before kick-off and the efforts of the fans really motivated us,” said Schalke midfielder, Johannes Geis, back in the line-up after serving a five-match ban for violent conduct.

“The supporters put in an incredible amount of work and we went all out to give them something back in return.”

4. Hitz and miss
The DFB disciplinary committee have confirmed that Augsburg keeper, Marwin Hitz, will not face retroactive proceedings for his unsporting behaviour prior to saving a penalty in Koln at the weekend.

Before the kick, the Swiss custodian was clearly seen ‘ploughing’ an area close to the penalty spot with his studs and duly was rewarded for his sabotage when the Köln front-man, Anthony Modeste ran up, lost his footing and failed to connect properly. Cheats do prosper.

Just six minutes later, Augsburg forward, Raul Bobadilla fired home a fine free-kick for the only goal of the game. We might not have heard the last of this either. According to Rhineland daily, Express, a Köln fan has been in contact with the local police, asking for a case of criminal damage to be brought against Hitz.

5. Hate at the Hesse derby
Eintracht Frankfurt president, Peter Fischer, finds himself at the eye of media storm for his apparent defence of hooligans amongst the club’s support.

Near the end of the 1-0 defeat at home to regional rivals Darmstadt, Eintracht fans provocatively burnt opposition club banners – creating so much flame and smoke that the game was held up – and on the final whistle, a group of 30 ultras somehow managed to reach back-stage, eager to confront their players.

“These are things you have to accept to a certain extent if you accept fan culture, ” declared Fischer. ” How should they release their frustration?”

The law and order lobby are sure to have a view on that.