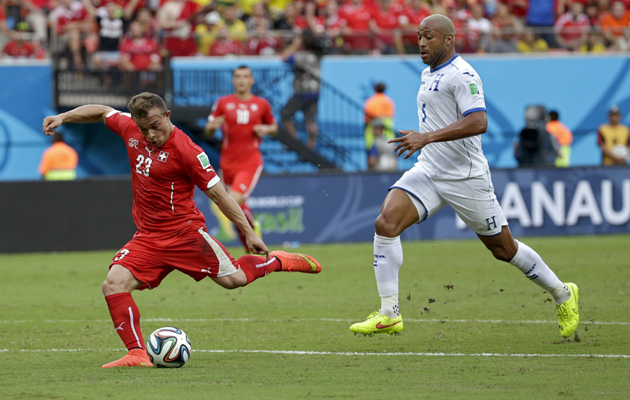 1. Dortmund: how to strengthen without bloating.
Bild’s deep throat at Dortmund has informed the tabloid of the Westfalen outfit’s interest in Internazionale’s Swiss attacking midfielder, Xherdan Shaqiri.

The story goes that the Dortmunder and the 23-year-old already have agreed personal terms, but what is holding the deal up is the insistence of new ‘Schwarz-Gelben’ coach, Thomas Tuchel, that the arrival be offset by a first team squad departure.

One possibility for the chop could be German U21 midfielder, Moritz Leitner, who recently returned to the Ruhr following a rather disappointing two-year loan stint at Stuttgart; another is Polish right-winger, ‘Kuba’ Blaszczykowski, too often injured in the last couple of seasons.

Courted this summer by Schalke and various Premier League sides, Shaqiri very much finds himself at a career crossroads, desperately needing to reassert his headlining credentials after three years as a bit-part player at Bayern Munich and a disastrous time at Inter, whom he joined to great fanfare in January, only to quickly fizzle out.

The 31-year-old central defender, full-back or holding midfielder became a free agent this summer after five seasons valiantly serving the Hamburg cause and would seem to meet all Juve’s criteria for a back-up role: zero-cost, versatility, extensive track record (300 plus Bundesliga games and 27 full appearances for the Nationalmannschaft) and lack of ego.

3. Schalke prepare a feast fit for the gods
It’s not always the end of the line when a top club declares a player surplus to requirements. Just ask combative and adventurous Internazionale full-back, Danilo D’Ambrosio, who within days of being told he no longer figured in the plans of ‘nerazzurri‘ coach, Roberto Mancini, now has the likes of Juventus, Napoli, Roma, West Ham, Schalke making eyes at him.

Clearly Schalke will not be the favourites to land him, but Royal Blues director of sport, Horst Heldt is very much an admirer of the 26-year-old and if others dither or dally, could take advantage.

4. A consignment of Serbian gold for Frankfurt
Just a few weeks after playing a key role in Serbia’s triumph at the World Under 20 championships, FK Vojvodina left-wing sensation, Mijat Gacinovic apparently is being chased by a slew of Bundesliga sides, with Eintracht Frankfurt thought to be the pacesetters in this particular race.

Agile, lively and a superb technician, Gacinovic already is Vojvodina’s captain – leading them to a good fourth-place finish in the Serb top-flight last season – and his arrival could be a sign that Eintracht are willing to offload the brilliant but inconsistent Japanese dribbler, Takashi Inui.

5. One Bosnian in, another out.
Dirk Schuster, the coach of newly-promoted Darmstadt is thought to be on the trail of tower block Bosnian centre-forward, Milan Djuric, who was relegated from Serie A with Cesena last season.

Effective on either flank, the Swiss-born Hajrovic only joined Bremen from Galatasaray 12 months ago, but with coach Viktor Skripnik favouring a midfield diamond, has found it tough to hold down a regular spot.