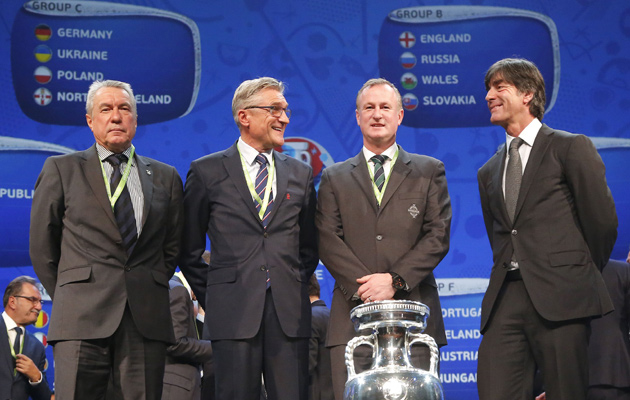 1. The luck of the world champions
Due to go head-to-head with Poland, Ukraine and Northern Ireland in the first-phase of Euro 2016, the German delegation had every reason to be delighted with the way the draw turned out at the Palais de Congres in Paris. Three opponents they would expect to beat nine times out of ten and no dangerous ‘floater’ in their pool such as Italy.

“I think our fans can already see us in the second round, ” laughed ex-Nationalmannschaft captain, Lothar Matthaus on Sky Deutschland.

The omens are good too. Just like their last European Championship triumph in 1996, Germany will compete in France in Group C.

2. Kiessling to cast-off?
Rather than celebrating a glorious decade of leading the Bayer Leverkusen line next summer, striker Stefan Kießling appears to have made up his mind to quit the Rhinelanders in the January transfer window.

The 31-year-old, who scored twice in the 5-0 rout of Gladbach at the weekend, has grown increasingly frustrated with a bit-part role this term and in an emotional face-to-face with ‘Werkself’ fans after Saturday’s game, looked for all the world as though he was saying goodbye.

Leverkusen director of sport, Rudi Völler, is adamant that the German international is not for sale, pointing out that he still has 18 months left on his current contract. But should Kießling insist on slipping his moorings, the Bayer management are most unlikely to stand in his way, especially with new Mexican front-man, Javier Hernandez, proving such a success since arriving a few monthas ago from Manchester United.

The scorer of a hat-trick against Gladbach, ‘Chicharito’ already has 15 goals to his name in all competitions this season (ten in the Bundesliga, five in the Champions League) and clearly finds the Bay Arena atmosphere much more to his liking than the growl of Louis van Gaal at Old Trafford.

3. Pep breaks the deadlock with a note
A few scribbled lines on a piece of paper was the number one talking point at the Allianz-Arena as Bayern Munich clinched the ‘Autumn Championship’ with a 2-0 home victory over newly-promoted Ingolstadt.

Kept at bay for the first hour by the visitors’ excellent pressing game, Bayern coach Pep Guardiola could take it no more and during a break in play, handed a note to skipper, Philipp Lahm, who straight away began discussing it with a number of teammates. Its contents? No fewer than a half-dozen positional changes, the ice-breaking moves including the switching of Lahm from right-back to right-midfield, Javi Martinez vacating his engine room berth for a spot in central defence and Thomas Muller shifted further forward to form a striking duo with Robert Lewandowski.

“We didn’t want to move just one player, ” explained Guardiola.  “It’s more simple to have one player communicate to the others than me calling each individual over. ”

4. Hertha in heaven
Not since the 2008-09 Bundesliga – when they finished fourth – have Hertha Berlin enjoyed such a strong first-half of the campaign.

Their 4-0 victory at Darmstadt was the capital city club’s fourth win in five outings and now happily ensconced in third-place in the table, they simply have to be taken seriously.

Under coach Pal Dardai, in charge at the Olympiastadion for less than a year, the men in blue-and-white stripes are playing with much more physicality and staying power and certainly are one of the most balanced teams in the league: very stable defensively, full of poise, craft and acceleration in midfield and boasting a fine front-line tandem in Bosnian penalty box shark Vedad Ibisevic and freewheeling Cameroon sidekick, Salomon Kalou. Happy days for the ‘Alte Dame’(Old Lady).

5. Lasogga turns villain of the piece
Someone should tell Hamburg striker, Pierre-Michel Lasogga that when in a hole, it’s best to stop digging.

Lucky to avoid a straight red card for a brutal studs-up lunge at Wolfsburg’s Brazilian defender, Dante – who fortunately was not injured in the incident – Lasogga would have been well-advised to keep a low profile after the 1-1 draw at the VW Arena, only to opt instead for a spot of macho self-justification.

“One shouldn’t be going overboard about this, we’re not playing chess,” declared PML, who just five minutes after his rush of blood to the head, picked Dante’s pocket to set up a goal for Nicolai Muller .

“A little bodily contact belongs in the game. It’s what makes football great. ”

How to make yourself a marked man in one easy lesson.