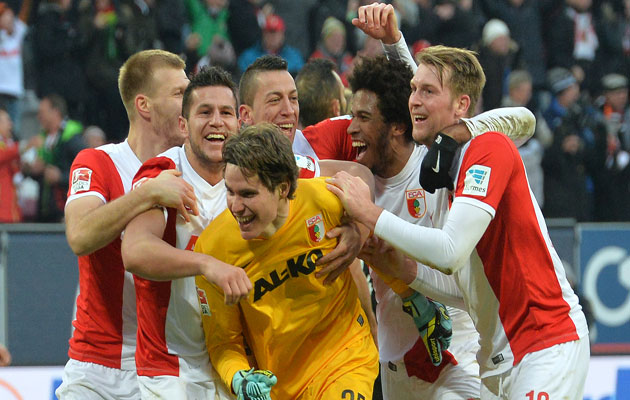 1. A goalkeeper who can play can be very useful indeed
Up until Saturday, only two keepers (Schalke’s Jens Lehmann in 1997 and Frank Rost of Bremen five years later) had ever managed to score in the Bundesliga, but now we have the hat-trick, Augsburg’s Marwin Hitz adroitly hooking home an injury-time equaliser in the 2-2 home draw with
Leverkusen. Back between the posts for the first time in three months following a knee ligament injury, the 27-year-old Swiss custodian’s cool finish kept the Augsburger firmly on course for European qualification and even if his career was to end tomorrow, his immortality is ensured. ”

It’s the sort of story only football can write, ” smiled Augsburg coach mMarkus Weinzierl, who had told reporters before the game that he had picked Hitz ahead of Alex Manninger for his superior ability with his feet.

“Marwin simply was in the right place at the right time. ”

2. Change of coach, change of luck
New Mainz boss, Martin Schmidt once was a motor racing mechanic and certainly seemed to have the ‘Rhinehessen’ engine purring in his first game in charge, a fully-deserved 3-1 Rhine-Main derby win over Eintracht Frankfurt.

After just one win in 13 and the inevitable sacking of previous incumbent Kasper Hjulmand, the Red-and-Whites were in dire need of fresh motivation and belief and as he has proved in the last four-and-a-half years with Mainz’s reserves Unders 23s, preaching passion is very much a speciality of Swiss citizen Schmidt.

Intense, emotional and tough – during his playing days he endured no fewer than seven knee operations – Schmidt is the perfect man to spark a revival and for good measure adheres to the house style – the agressive and high-energy pressing game popularised there by Wolfgang Frank and Jürgen Klopp.

3. Hannover: beware the curse of Eintracht
One of only two teams not to have won a game since the winter restart – Stuttgart being the other – a becalmed Hannover appear to be following the disastrous example of Eintracht Frankfurt’s Class of 2010-11, who after starting that campaign with a concerted flourish, experienced a vertiginous post-Christmas fall from grace, eventually coming face-to-face with the relegation axeman.

Despite going into the winter break in an enviable eighth-place, the Reds already were on the slide in the back-end of the Autumn Championship and although they currently sit four points above the drop zone, a run of just one win in eleven has many fans at the HDI Arena fearing the worst.

In normal circumstances, their 1-1 draw at Köln on Saturday would have been considered a decent result, but given the team’s slump, coach Tayfun Korkut has every reason to feel under threat.

4. Robert Lewandowski launches his Bayern Munich fightback
Taking their cue from Pep Guardiola’s recent treatment of the high-profile striker – playing him out of position on the left-wing against Hamburg last week and leaving him out of the starting line-up for the Champions League game in Ukraine versus Shakhtar Donetsk – sections of the German media have taken to wondering out loud if Bayern made a mistake in recruiting the Polish superstar last summer.

But fortunately in football there’s always an imminent opportunity to return fire on the critics and in the 6-0 away day romp in Paderborn on Saturday, ‘Lewa’ was in fine form, scoring twice, running cleverly off the ball and linking the play with bravura. Time for the critics to ease off. Since when was ten Bundesliga goals the mark of a flop ?

5. Gladbach go minimalist
Presently third in the table, the Foals definitely are not laying it all on the line in their bid for Champions League qualification. In four of their five fixtures this year, including the 1-1 draw at struggling
Hamburg on Sunday, they have scored just once and as far as efficiency is concerned, you cannot get any better than a goals to points ratio in 2015 of 4/10.

Both dazzling on the counter-attack and expertly drilled and structured by perfectionist coach Lucien Favre, Gladbach’s back-line rarely has been as fortified as this term, keeping eight clean sheets in 22 rounds and conceding just 18 in all.