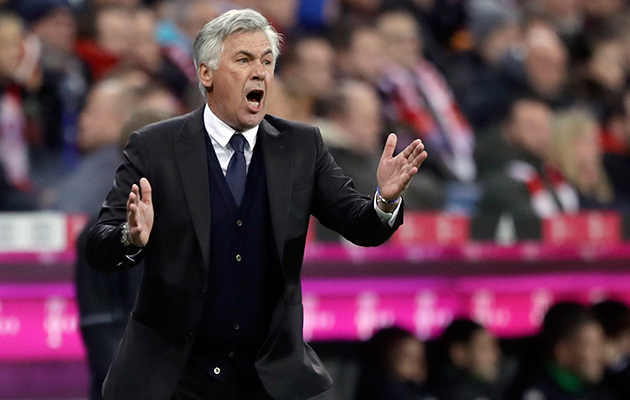 1. Duck and cover at Bayern
As Christmas approaches, the ambience at Bayern Munich is certainly is not one of peace on earth and goodwill to all men.

Back-to-back defeats in the last week of November – the 1-0 reverse in Der Klassiker against Dortmund and humiliating 3-2 Champions League loss to Russian outfit, Rostov – have left the Bavarians exposed to heavy criticism, with new coach Carlo Ancelotti and central defensive tower of power, Jerome Boateng, cast in the role of scapegoats.

For many in the Deutschland press corps, Ancelotti’s side simply are not playing with the same intensity and attacking flair as under predecessor, Pep Guardiola, while club chairman, Karl-Heinz Rummenigge, blamed Boateng’s poor performance in Russia, on too many extra-curicular activities.

According to Rummenigge, the German international centre-back, has taken his eye off the ball since being the country’s Player of the Year in August.

“Jerome has to tone it down a little bit. Since the summer, it’s all been a little too much for me. It would make sense for him and the entire club, if he came back down to earth,” Rummenigge said.

Bayern responded to their frosty flop in Rostov with a much better display in a 2-1 victory at home to Leverkusen on Saturday. However they did require a slice of good fortune late in the game when defender Javier Martinez was not punished for clearly handling in his own box.

2. The club they love to hate: genuine hostility or respect?
Make no mistake. The German Big Two, Bayern and Dortmund, most definitely are unsettled by the seven-year rise and rise of shock Bundesliga leaders, RB Leipzig.

Dortmund chief executive, Hans-Joachim Watzke, never misses an opportunity to pour scorn on what he sees as a club with no history whose main aim is the promotion of the Red Bull energy drink brand. And over at Bayern – who recently lost their number one spot to the upstart easterners – newly-reinstated president, Uli Hoeness, clearly is taking the RB challenge very seriously indeed.

“The Leipziger won 4-1 (at Freiburg) tonight and at last we have another enemy to attack apart from Dortmund,” declared Hoeness at Bayern’s AGM, his first official engagement at the club since the end of a spell in prison for tax evasion.

Sensibly RB director of sport, Ralf Rangnick, refuses to be drawn into a war of words with  Dortmund and Bayern top brass. Then again, why would he? Unbeaten this season and victorious in nine of their 12 games, the Roten Bullen bandwagon shows no sign of slowing down and more and more people are coming around to the view that we are watching a remake of the 1997-98 campaign, when Kaiserslautern stunned the nation by becoming the first newly-promoted side to win a Bundsliga title. At least until now.

3. Tuchel tells it as it is
Beaten 2-1 at Eintracht Frankfurt on Saturday, Dortmund’s afternoon of frustration was perfectly summed up by what happened in injury-time.

An ‘if only’ sequence featuring a shot by substitute Ousmane Dembele against the bar, a rejected penalty appeal after striker Pierre-Emerick Aubameyang went down in the box under challenge from home winger, Mijat Gacinovic, and Schwarz-Gelben captain, Marcel Schmelzer, furiously manhandling referee, Wolfgang Stark in the subsequent melee.

Schmelzer was lucky only to receive a yellow card; other officials undoubtedly would not have been as lenient.

Fact is,  the Dortmunder were not hard done by at all. Just a few days after hammering Legia Warsaw 8-4 in the Champions League, the Ruhr giants were sloppy and uninspired throughout and coach Thomas Tuchel was absolutely justified in his searing post-mortem.

“If you don’t come up to scratch in so many areas, you can’t possibly win a Bundesliga away game,” he lamented. “Technically, tactically, mentally, It was the complete shortfall.”

Frankfurt, by way of contrast, were all smiles. They are now unbeaten in seven games and are up to fourth in the table. Quite an achievement for a team which was fighting relegation last term.

4. The Vedator strikes again
Hertha Berlin’s 2-1 victory at home to Mainz on Sunday essentially was the Vedad Ibisevic Show, the in-form Bosnian front-man netting a brace to help his side climb to third in the table, recording his 100th Bundesliga goal and then getting himself sent-off for an unnecesary double dose of yellow cards.

The only team in the country to have a 100 per cent record on their own patch this term, Hertha never have enjoyed a better start to a top-flight campaign and have more than enough tactical flexibility, resist-or-die spirit and pace out wide to remain in the European qualifying shake-up. No real big names, it’s true. But a resourceful well-drilled and defiant unit. One coach Pal Dardai should be proud of assembling.

Some say Hertha’s Hungarian boss, has a touch of Diego Simeone about him and like the Atletico Madrid guru, he’s a decidedly impressive motivator and organiser.

5. Germany: We don’t do exhibitions
At next year’s Confederations Cup in Russia, the Nationalmannschaft have been drawn to compete in Group B alongside Chile, Australia and the winner of the 2017 African Cup of Nations.

But what sort of squad will the Germans send to Sochi, Kazan and Moscow? Bundestrainer, Joachim Löw has hinted that he may allow a number of his senior players – mainly those based in the Premier League – to have that summer off and mainly use the tournament as an opportunity to blood youngsters.

A further complication is that European Under 21 Championships take place at exactly the same time and the DFB is likely to prioritise the latter.

Inevitably, Russian organisers and FIFA are not particularly keen on the idea of Germany B/C pitching up, though Low did a fine job at the draw of pouring oil on troubled waters: “What we’ve seen here these past few days gives us an appetite for the Confed Cup. The Russians need not worry We’ll come with a good team.”