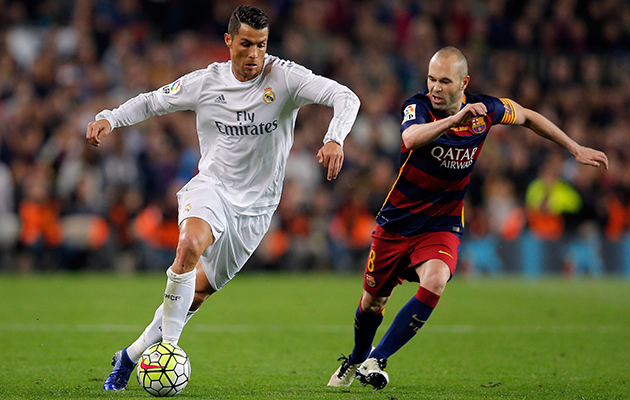 In the build-up to their match against Barcelona last week, Real Sociedad released a video. It starts with a spot of scratching and a middle-aged man bumping fists with a friend as he begins to rap his way around San Sebastián. As the goes from scene to scene, street, to street, his shirt changes. Shirts, plural, in fact. Never mind half and half scarves, this is half and half shirts: Barcelona-Madrid, England-Argentina, City-United, Boca-River, and more. “Why would I support one team if I can support two at the same time?” the rap begins, “why should I suffer on a Monday if I can win on a Sunday?”

Round the city he goes – urban scenes, the staple of the genre – rapping about the joys of having two teams. He goes down an escalator and back up again. “Why not go down … and still stay up?” He is Viking and Indian at once, standing over the table football table. Viking and Indians are the nicknames of Real Madrid and Atlético Madrid, in case you’re wondering. He is a ‘chévillista’, at once a fan of Valencia and Sevilla. He likes Mourinho and Guardiola. And he doesn’t have to choose a Balon d’Or winner ever year; you don’t when you support ‘Messinaldo’. Yes, with two teams, life would be good …

But that, the video concludes, is not real life. “A passion split in half is not a Real passion,” it says, pun intended. “I don’t have a second team … do you?”

The answer is supposed to be: “no, of course not, don’t be bloody silly.” But the answer is actually: “yes”. And that is exactly why the video was put together. It is not a redundant question in Spain. And while the video doesn’t say so explicitly, this is not so much about Sevilla or Valencia or Atletico or all those other teams; this is about Spain’s dominant and domineering big two, some would say Spain’s only two. And that is what they rebel against. It is about Real Madrid and Barcelona – something that comes into focus this weekend, as the clásico rolls round again.

It’s the ‘clásico’ these days, anyway; it’s not so long ago that they used to call it the ‘derbi’ and while they are different cities – different identities, some would say different nations – it was a title that did fit somehow. This was, and is, kind of Spain’s derbi.

According to government figures quoted by the journalist Agustín Castellote this week, 37.9% of Spanish football fans support Real Madrid, 25.4% support Barcelona, and the next highest is Atlético way down on 6.1%, followed by Valencia 3.5% and Athletic 3.3%. But even more striking is that while there are of course those who hate them both – and in the face of the Madrid-Barcelona dominance, the impression is that their numbers are growing – within Spain so many people ‘support’ one of the big two as well as their own, usually local, team. And even those that don’t support them do often have a kind of built in, non-negotiable preference for one or the other. When the clásico comes around they care

“Half of Spain is Madrid, half is Barcelona, even if they support Oviedo or Ponferradina,” says Luis Milla, who played for both.
Not just Spain any more. This was always the biggest game in the world; is it now the biggest game of the world? It certainly feels like it. Spain’s derby has becoming something like the planet’s derbi, ubiquitous, unavoidable – and, despite the natural complaints about the merciless hype, usually pretty good too.  “The clásico stops the world,” said Karim Benzema, as astrophysicists slowly, sadly shook their heads.

It’s come a long way, that’s for sure. The first time they met was at the hippodrome in May 1902 – a game that was proceeded by the players getting tetanus jabs. People came well-dressed: “little ladies in wasp-waist dresses and enormous can-can dancers’ hats, with pointed gaiters … grave, solemn gentlemen, dark colours brightened by a carnation through the buttonhole,” in the words of one report. “Military men corseted into tight waistcoats and trousers like bullfighters … in the official section, grey button-up frock coats and top hats, walking sticks with marble handles.” About two thousand people attended that day, sitting on chairs rented from a trader in the Rastro market. 98,000 will be at the Camp Nou on Saturday afternoon, mostly wearing polyester replica kits and sitting on plastic seats. And millions more will be sitting on sofas all around the world.

Except in England, where this game can’t be shown live.

Sporting Gijón manager Abelardo Fernández went on a foul-mouthed rant in midweek: a rant so long, so aggressive, so pointed, that the press officer tried to calm him down, reaching out a comforting arm, only for him to say: “leave it, I’m as happy as the mother who gave birth to me.” And he did indeed appear to be enjoying this.

Abelardo is no stranger to losing his head, or to a bit of potty-mouthed posturing, but amidst the various things he said, the f-thises and the f-thats, one thing stood out above all else, a probably unintentional portrait of the way things are, a reflection of one of the fundamental flaws of the sports media here and the clubs that, while they moan, foment it, the way that everything has become entrenched, sides are taken, and reporters are not expected, and in some case do not want, to report on teams but to propagandise for them: “you, who acts proud to be a Sporting fan … you’re not a Sporting fan at all,” he spat.

Careful what you wish for. And above all, never trust footballers. A local strip-club-turned-brothel in Alicante handed out leaflets before Hércules’s Copa del Rey game against Barcelona this week. If the locals managed to win or draw against Barcelona, they promised, drinks would be free all night. Hércules did and the place, ABC reported, was packed, costing them a fortune.