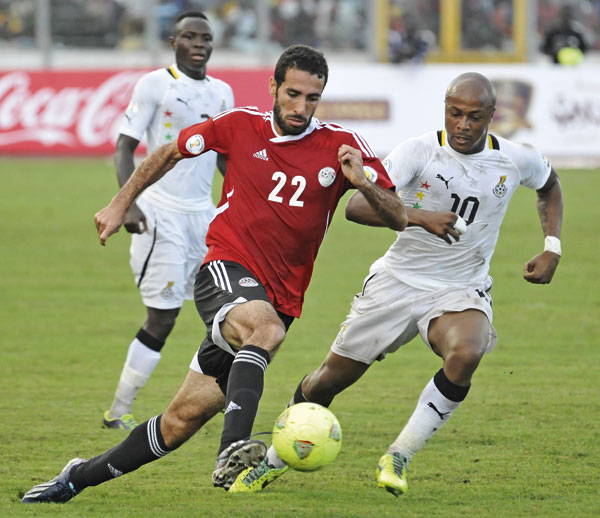 It is stoppage time in the second leg of the 2013 African Champions League Final. Al Ahly are 2-0 up against Orlando Pirates and heading for a record eighth continental title.

Aboutrika, Al Ahly’s mercurial, bow-legged midfield genius has already made the tie safe. His stunning free-kick in the first leg in South Africa gave Ahly their vital away goal. His close-range strike in Cairo had cemented their title and then he was substituted, mobbed by the bench, by nearby police officers and fans – anyone who could get close enough to touch him – before the referee blew the full-time whistle and marked the end of one of African football’s most remarkable careers.

Aboutrika’s roll-call of honours alone would place him among the continent’s greats: five African Champions League titles, seven Egyptian League wins and two African Nations Cups, among others. Yet he is much more than the greatest player that Ahly and Egypt have ever seen. He is also Al Ahly and Egypt’s conscience, a role that has seen him elevated to the status of an untouchable in the Middle East, Africa and beyond.

Ever since signing from Tersana in 2003 Aboutrika has been the driving force of both Al Ahly and
Egypt’s national team during the most successful era in both their histories. The midfielder has become known as much for his grace, intelligence and social conscience off the pitch as on it. One former coach of Tersana tells of how Aboutrika was offered a big contract to stay but refused, instead signing a deal equal to his team-mates.

He was there in Port Said on February 1, 2012, when 72 Al Ahly fans were killed after a match. He held one of the fans as he died in his arms. Deeply traumatised by what he saw, and with the Egyptian league being cancelled, he initially decided to retire. But Ahly’s fans urged him to return and he drove the team to an emotional 2012 Champions League victory in honour of the dead.

His goals were vital in that success, not least his second-half hat-trick against Stade Malien in an earlier round that dragged Ahly back from the brink. During that season he even refused to play an Egyptian Cup match, siding with Ahly’s ultras fan group, the Ahlawy, who vowed to boycott all domestic football until justice for the dead was secured. The club banned him, but he later returned and lifted the title. When he picked up the trophy he wore a T-shirt with the number 72 on the front.

“Blood brother”
American coach Bob Bradley, then in charge of Egypt’s national side, was so impressed by Aboutrika’s humility and intelligence – he holds a philosophy degree – that he referred to him recently as his “blood brother; he’s a good man.”

Yet, even at 34, the past year has seen Aboutrika playing some of the best football of his career. He outshone every other midfielder at last year’s Club World Cup in Japan and was untouchable in Egypt’s 2014 World Cup qualifying campaign. With the league still in chaos in post-revolution Egypt, Aboutrika was loaned out to Bani Yas in the UAE to help prevent Al Ahly from going bankrupt. He helped them to win the Gulf Champions League before returning to lead Ahly to another continental title.

The only disappointment is he will never grace a World Cup finals. Egypt have not qualified since 1990, and play-off defeat by Ghana in November ended any hope Aboutrika had of playing on the greatest stage of all.

Such has been Aboutrika’s standing in Egyptian society – he is a devout Muslim who has spoken out against
the recent coup that saw the Muslim Brotherhood toppled from power – that his future might lie away from football. But above all, Ahly’s no22 will be remembered for being the engine of Egypt’s domination of African football.

But there is one last challenge. He will play in the Club World Cup in Morocco, where he is the joint-top overall goalscorer with Lionel Messi.