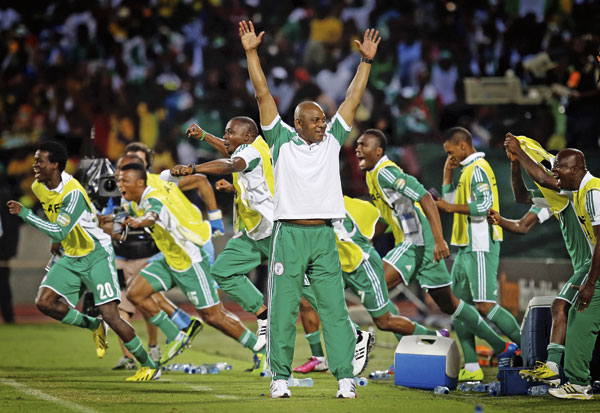 Stephen Keshi went into the African Nations Cup finals in January 2013 looking to lay down a cushion for a potential fall.

On arrival in Johannesburg he told the media that his new-look Nigeria, devoid of several key names and unusually with six home-based players included, was a team in transition, a new selection being groomed for a serious tilt at World Cup glory five years down the line. “This is the team for Russia in 2018,” he insisted.

Three weeks later, though, Nigeria were celebrating on the pitch at Soccer City, having overcome even their own doubts to win the tournament with a 1-0 triumph over Burkina Faso.

They had been far from convincing in the group phase and needed two late penalties against Ethiopia to book a quarter-final place. But then they went up a gear and beat top-ranked Ivory Coast in the last eight, saw off Mali in the semi-final and then the Burkinabe in the Final, making Keshi only the second man to win Africa’s top footballing prize as both a player and coach.

It was only the third Nations Cup triumph for Africa’s most populous country, who for once had gone into the tournament without a crushing burden of blind expectation on their shoulders.

Keshi’s keen eye for talent and his firm grip on the team has since seen Nigeria also book a 2014 World Cup finals place, albeit after coming through a relatively modest group with Kenya, Malawi and Namibia, and a play-off tie with Ethiopia.

Although they struggled in last summer’s Confederations Cup in Brazil, this is a team that is likely to be a lot better when the real tournament comes around in June.

“Big Boss”, as Keshi was known in his playing days, has always been a major figure in the Nigerian game. He was the first significant export to European club football from a country which has become a prodigious producer of players ever since, and was a strong leader of a successful side, culminating in a maiden World Cup appearance at USA 94.

Later he served as assistant coach and was always earmarked for the Super Eagles’ top job.

He is well versed with the vagaries of Nigerian footballing intrigue: the money hassles, the disorganised and the rampant politicking. To survive this maelstrom is testimony to his winning mentality.

Keshi took the first year and more than 10 matches of his tenure to settle on his plans. His decision to axe the likes of Taye Taiwo, Yakubu Aiyegbeni and, most controversially, Peter Odemwingie was heavily criticised at first, but quickly forgotten in the heady celebrations that followed the unexpected success.

Surprisingly though, the adulation was not universal and Keshi has had to deal with in-fighting at the Nigerian Football Federation that saw several staff members axed or their salaries reduced in a petty political play.