Due to soon embark on a sell-out tour of Premier League venues, Pep Guardiola is widely regarded as the planet’s best coach and an object of desire for every leading club in Europe. Yet in Germany, where he is in his third and final season in charge of Bayern Munich, not everyone is quite so sure.

What counts at Bayern are the biggest prizes. And while Guardiola has achieved domestic dominance – two Bundesliga titles already in the bag and a third on its way – he still has to deliver in the Champions League, having been unable to prevent the Bavarians tasting bitter semi-final defeat against Real Madrid and Barcelona in each of the past two continental campaigns.

The risk-versus-reward equation he faces over the next four months is a simple one. Triumph in the Champions League and he assumes the mantle of Bayern immortal.

Fail and expect to leave the Allianz-Arena by the back door, appreciated rather than revered.

In contrast to such Bayern coaching greats as Udo Lattek, Ottmar Hitzfeld and Jupp Heynckes, Guardiola has never totally won over the club’s supporters; nor has he established a Jurgen Klopp-like emotional connection with the fans. And bearing
in mind the scintillating football he has served up with Bayern, it is the ultimate
of ironies.

Under Guardiola, Bayern have become poetry-in-motion meets ruthless assassin. Despite his constantly whirling carousel of formations and personnel, the net result remains the same: a masterclass in fluidity, control, instant problem-solving and attacking panache. Blurred lines and refinement. Patience, precision and positional play of the highest order. A futuristic work of art if ever there was one. On occasion even approaching perfection.

No coach in world football today approaches his craft more profoundly than the ever-calculating Guardiola, who is exceptional in his powers of analysis, meticulous drilling of his team and in a class of his own when thinking his way through the evolving matchday battle.

After more than two decades as a player and coach at Barcelona, his switch in 2013 to Bayern was always going to be something of a culture shock for the Catalan. But how well he has adapted to the physicality and dynamism of the German scene.

Although pressing and possession remain at the heart of his philosophy, these days he is much more likely to sanction the use of long, diagonal balls – mainly struck to order by centre-back Jerome Boateng – and following years of considering a genuine centre-forward as an antiquated irrelevance, he now swears by the outstanding Robert Lewandowski.

At Bayern, Guardiola has generally become more flexible in his approach, and on the evidence of this season he is finally getting to grips with one of his team’s fundamental weaknesses: their vulnerability to the counter-attack.

Genius comes at a price, though, and it’s fair to point out that not everyone who has crossed his path at Bayern has found it easy to work with him.

His relentless tactical demands can wear down even the most dedicated professional and a number of Bayern stars – among them Franck Ribery, Thomas Muller and Mario Gotze – are rumoured not to be on good terms with him, while the club’s top brass have, at times, found him decidedly unwilling to engage in open dialogue.

As for his relationship with the media, it can only be described as non existent. One-
on-one interviews simply do not happen and at press conferences, he rarely opens up, mainly serving up platitudes.

“Guardiola focuses only on the tactics,” former Bayern boss Hitzfeld once sniffily declared. “He has had almost no meetings with his players and has sealed himself
off from the media.”

Over the years, it has become something of an urban myth that Guardiola lacks warmth and does not interact closely with his players.

Not surprisingly, many of his current charges beg to differ with that opinion.

According to Boateng, he is the only coach who has ever talked seriously
about the nuts and bolts of the game. 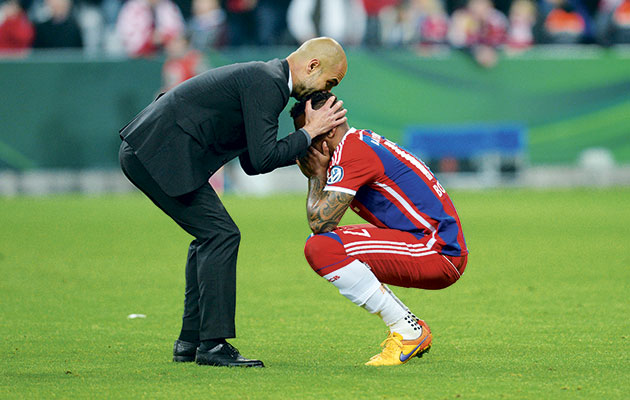 If Guardiola was aloof and a poor communicator, he would not be able to put his often complex messages across. Along with his tactical nous, his strongest suit is his flair for improving players. Without the right words and the empathy, the task would be beyond him.

One of life’s eternally-dissatisfied characters, Guardiola was never going to spend three years at Bayern in total agreement with those around him.

Used to calling the transfer shots at Barcelona, he simply could not understand why the club’s director of sport, Matthias Sammer, and not he, had the final word on who to sign. He also came to feel that he did not wield enough influence in the area of youth development.

While such differences of opinion were largely kept under wraps, there was no hiding his long-running feud with the Bayern medical department. Repeated rows with long-serving club doctor Hans-Wilhelm Muller-Wohlfahrt over the diagnoses of injuries and the latter’s refusal to attend training sessions, eventually led to the world-renowned orthopaedic specialist resigning last year, claiming he had been scapegoated for a Champions League defeat away to Porto.

A substantial proportion of Bayern followers thought Guardiola had acted arrogantly in the affair, but he rode out the storm. Recently it emerged that he was still at war with the men in white coats, apparently blaming new club doctor Volker Braun for yet another injury setback for Ribery who – apart from a cameo in December – has been sidelined for a year with an ankle problem.

It’s often asserted that Guardiola is allergic to ceding authority, that he is on a power trip. But in his eyes, attention to detail is the A to Z of his job, applying the highest of standards to every aspect of the first team’s performance. Fastidious, yes. A control freak, undoubtedly. But never the dictator some make him out to be.

Always in search of those extra percentage points of effectiveness, it may actually be easier for Guardiola in England than in Germany, where coaches run the team and nothing else. A British-style manager enjoys a much wider remit.

Wherever he ends up, he is sure to be at the very centre of that club’s sporting operation. Brain, heart and soul.

Fifa to reveal one of its biggest secrets