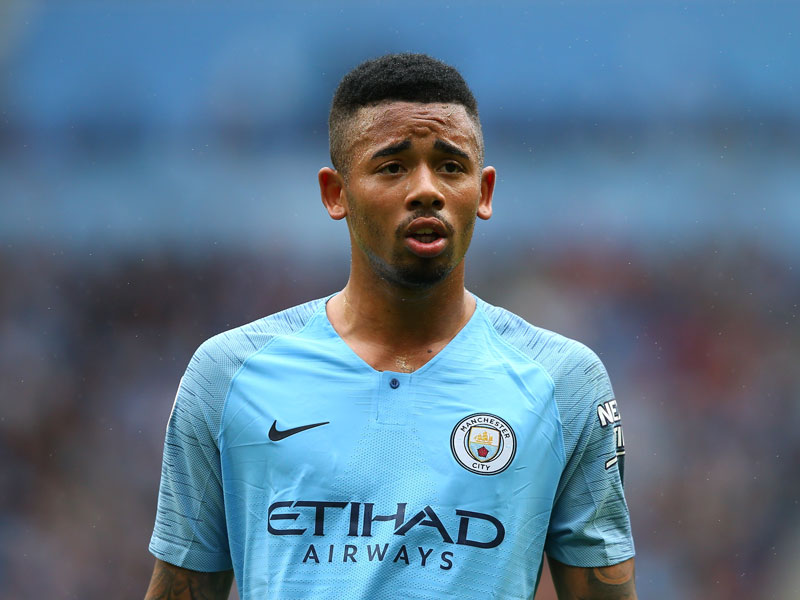 Welcome to our page dedicated to Manchester City and Brazil striker Gabriel Jesus. Still only 21-years-old, Jesus has won the Premier League with his club and has played for his country 22 times scoring 10 goals. Have a read of our player profile on him below.

“Jesus is Brazilian” was the front page headline of the sports daily Lance! the day after a 1-0 win over Germany in March. It was a play on words, as the country commonly claims God as one of its own. And it was also a tribute to the scorer of the only goal – someone who is by far the most important Brazilian player to emerge since the 2014 World Cup.

Four years ago, as Brazil prepared to host the World Cup, Gabriel Fernando de Jesus was a 17-year-old with dreams. He was already starting to make a name for himself in the youth ranks of Palmeiras, traditional giants from his native city of Sao Paulo. From the working class northern neighbourhood of Jardim Perri, his career was following
a delightfully old-fashioned approach.

This is not a story of a hot-housed youngster, brought up through futsal, and swiftly turned into a commodity. He grew up playing his football on dirt-track pitches in his home neighbourhood, turning out for a succession of local teams. The last of them was Anhanguera, and he scored so many goals for them in an under-15 competition that he came to the attention of Palmeiras. 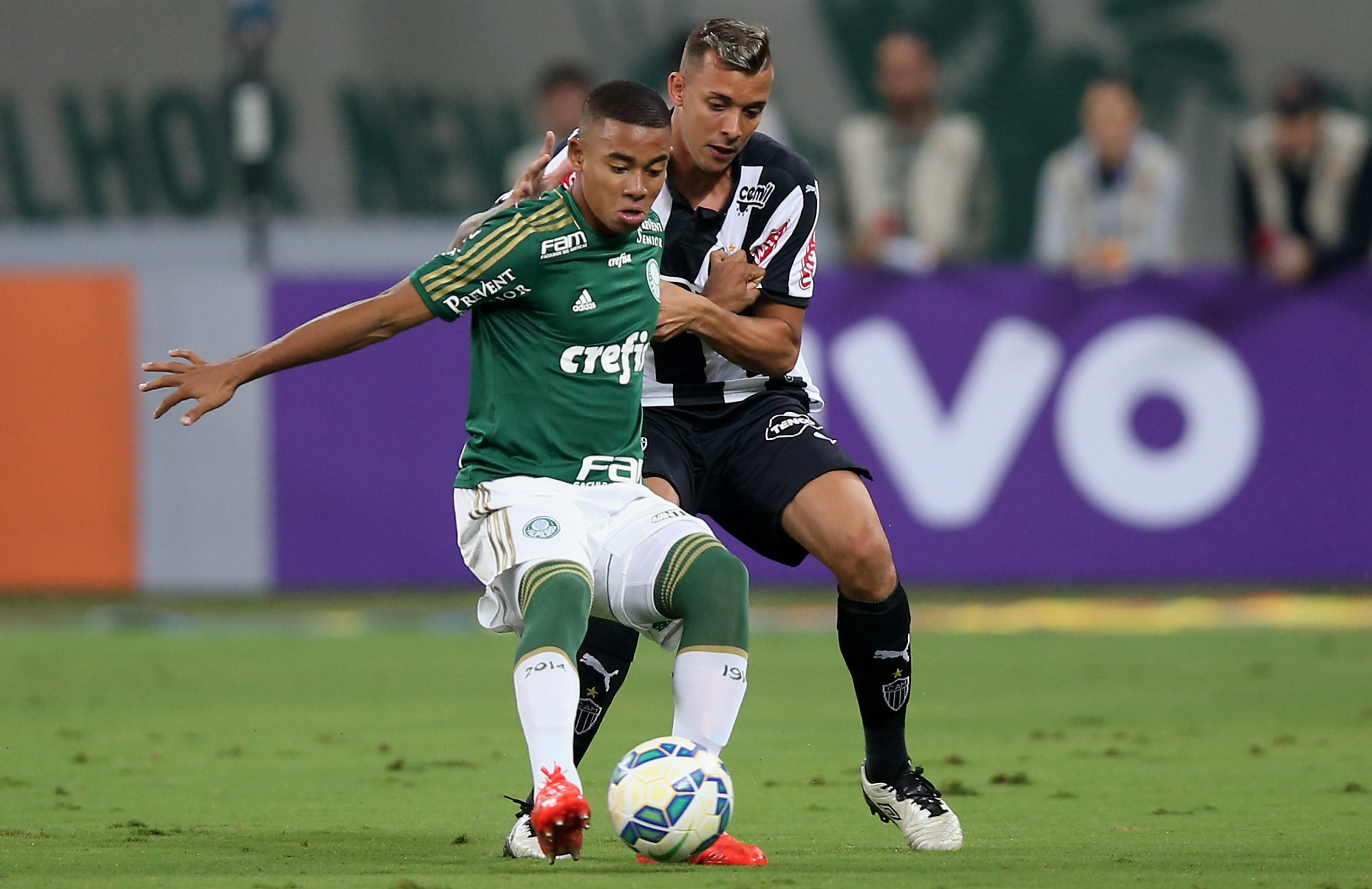 In another sense, his is a sadder but all-too-typical tale of the Brazilian periphery. His father walked out on the family, leaving his mother to bring up four children on a cleaner’s salary.  Dona Vera is the true heroine of the story, keeping the kids on a tight leash.

“I was strict with them because I had to be,” she says. His mother and older brother, Felipe, still watch over him today in Manchester, but unlike some high-profile Brazilians, this day-to-day contact is less business management, more a case of keeping him grounded.

He was certainly well grounded four years ago. A few months back he posted a photograph on social media showing him at that time, an ordinary young Brazilian taking part in one of the country’s biggest rituals: decorating the streets yellow, green and blue in celebration of the upcoming 2014 World Cup. “I look at these old photos and get emotional thinking about the dreams I had and the things I’ve been through to get to where I am now,” he says. And now, four years later, it is his effigy that will be painted on streets all over the country.

“I was fortunate enough to play with Gabriel at Palmeiras,” says the recently retired Ze Roberto. “He has a lot of talent, a lot of potential. And now at Manchester City he is being trained by one of the best coaches in the world, which is going to help his development.”

Ze Roberto’s international career coincided with the days of Ronaldo and Adriano, when Brazil were rich in centre-forward resources. In the 2010 World Cup the position belonged to Luis Fabiano, an efficient performer without the brilliance of his predecessors. And thereafter the position turned into something of a problem.

Towards the end of his two-year reign as national coach, Mano Menezes was experimenting with a 4-2-4-0 formation, without a recognised centre-forward. At the very moment that things were starting to look interesting, he was sacked, and replacement Luiz Felipe Scolari instantly brought back the target man figure. Brazil went into the 2014 World Cup with their attacking line led by Fred. It had worked well enough during the previous year’s Confederations Cup, but it failed dismally now – and the presence on the bench of Jo, his reserve, did not instil fear into opposing defences.

The task of picking up the pieces after the 2014 disaster bizarrely fell to Dunga, who never seemed sure of what he wanted from his centre-forward. First he went with a more mobile striker in Diego Tardelli, and also tried out Roberto Firmino, who got the nod for the 2015 Copa America. But he also lurched towards more physical strength, giving Luiz Adriano a chance and then settling on Hulk, who began the 2018 qualifiers as first choice. But he soon gave way to the veteran Ricardo Oliveira, and there was even an attempt at playing Neymar through the middle. With both of these players unavailable for the 2016 Centenary Copa, Dunga went with Jonas, before giving young Gabriel Barbosa a chance in the fateful third group game and replacing him with Hulk in the second half.

So when Tite took over the position was wide open – and a decision had to be made before a crunch qualifier away to Ecuador. Tite was unsure. He wanted to go with youth and pace. His first squad included Taison of Shakhtar Donetsk as a standby, but the battle for the centre-forward slot was to be fought between two of the team that had just won the Olympic gold medal: Gabriel Barbosa, who had left Santos for Internazionale, and Jesus, who was due to join Manchester City from Palmeiras at the end of the year.

In hindsight it looks like a no-brainer, but at the time it was a tough decision. The evidence from the Olympic campaign was far from conclusive. Brazil had started with two dismal goalless draws, in which Jesus had been utterly ineffective at centre-forward. An emergency restructuring was carried out for the third match, with Jesus moved to wide left, Barbosa staying on the other flank, and Neymar moving inside where he was joined by Luan. Suddenly Brazil started generating football, and Jesus added three goals to the cause as the team moved towards the title.

But a few good games cutting in from the left wing during a home Olympics were hardly a convincing argument to play centre-forward in a crunch World Cup qualifier at the other end of the continent. 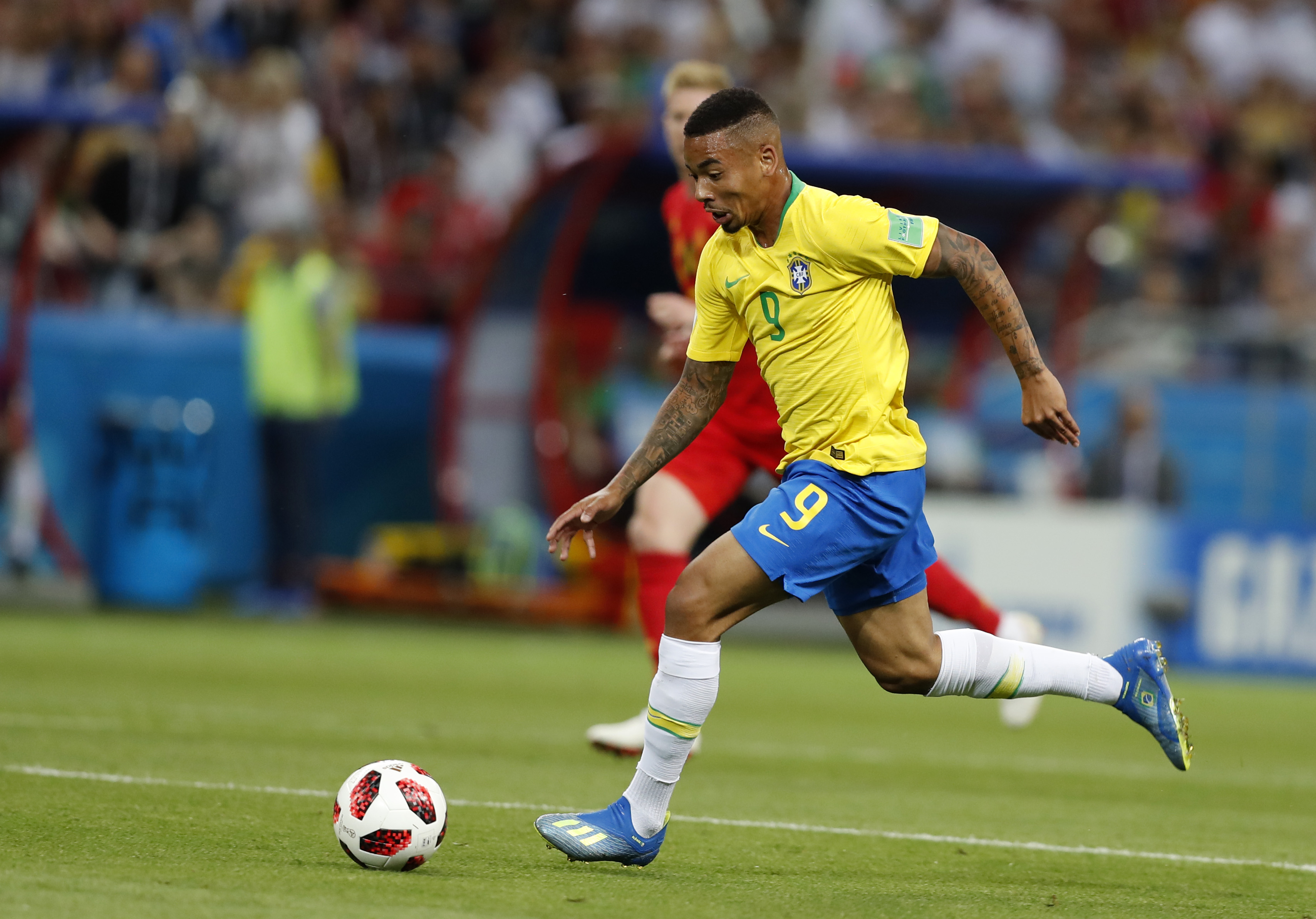 Moreover, was the 19-year-old really ready – in emotional terms as much as technical ability? His potential was undeniable. As he banged in the goals in the youth ranks, Palmeiras fans had gone as far as to organise a petition calling for his swift promotion to the first team. At that time he played under the name of Gabriel Fernando – but soon he accepted his saviour status, switched his name to Jesus and asked for the number 33 shirt.

He helped the team win the domestic cup in 2015, when he was chosen as revelation of the season. The following year Palmeiras won the league and he was named the outstanding player. But that year the team was also humiliatingly eliminated from the Libertadores Cup at the group stage. Jesus had looked full of spark, but in the vital game, away to Nacional of Uruguay he lost his head and was sent off. There was an air of immaturity about him. A song in his honour mentioned his cry baby face.  A missed chance or a decision going against him looked likely to set off an existential crisis.

It was a bold gesture of faith from Tite, then, to hand Jesus the number-nine shirt for the trip to Ecuador. And with 20 minutes to go, the move had not been a conspicuous success. The game was goalless – a result that Brazil would have settled for – and while the rookie centre-forward had shown some pace he had spent most of the match wandering into offside positions.

But suddenly a game, a campaign and a career all changed. Jesus’ speed broke the deadlock, latching on to a bad backpass and being brought down by the keeper to win a penalty, which Neymar converted. And then, to make sure of matters, Jesus scored two contrasting goals of true brilliance: the first a clever close-range flick from a cross, the second a turn on the edge of the box and a gorgeous shot placed into the far corner.

A goalless draw had been turned into a 3-0 victory, Brazil had a new momentum and they had also discovered a new centre-forward.

In the dressing room Gabriel phoned his mother. Her immediate reaction was to criticise him for continually being caught offside. This family mixture of support coupled with the demand for high standards is a key part of his mix.  One of his youth coaches once commented that Gabriel’s left foot was weak and that he was poor in the air, but when he made his Manchester City debut, coming off the bench against Tottenham Hotspur, his immediate impression was made in the air and with his left foot. 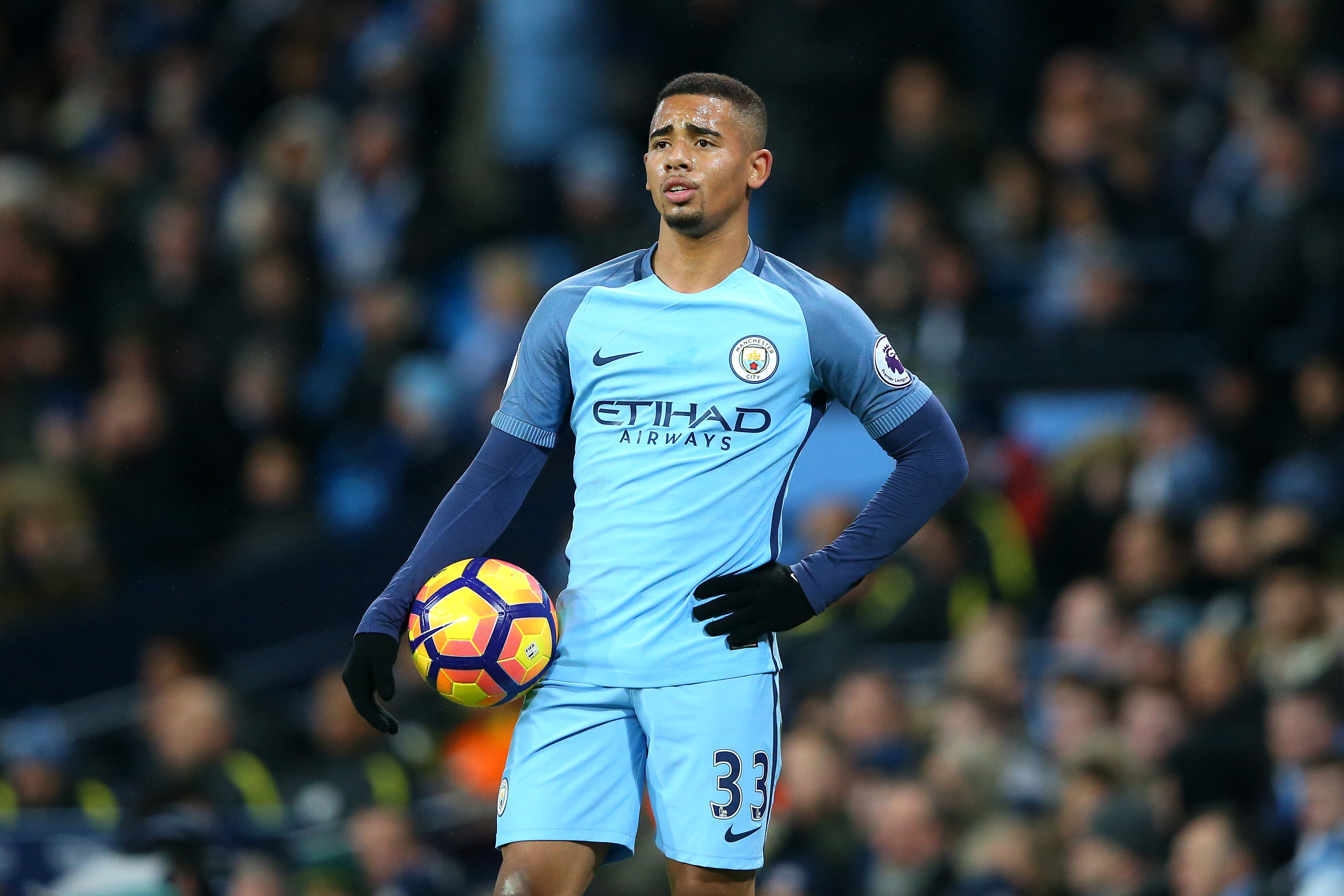 And in the next few games, Brazil were the beneficiaries of the range of his talent. He was more than just a speedster with a capacity for off-the-cuff moments, he could combine beautifully – and Tite had spied the potential for a fruitful relationship with Neymar, seen most clearly in qualification with a superb pass that took the Argentina defence out of the game and allowed Neymar to score Brazil’s clinching second goal in a 3-0 victory.

As well as setting up goals for Neymar, Phillippe Coutinho and Renato Augusto, Jesus kept scoring plenty of his own. The opening goal away to Venezuela must have been especially pleasing for Pep Guardiola as he worked hard to get on the end of a poor kick out from the opposing keeper, who was then left helpless by a sublime lob.
A couple of injuries at City have made the path a little less smooth, and the Liverpool form of Firmino has been sufficiently outstanding to keep him on his toes.

Quick enough to be played behind the defensive line, good enough to combine at pace with his team-mates, brave enough to battle it out with the centre- backs and developing at a pace faster than his speed across the ground, Jesus has solved Brazil’s centre-forward problem.