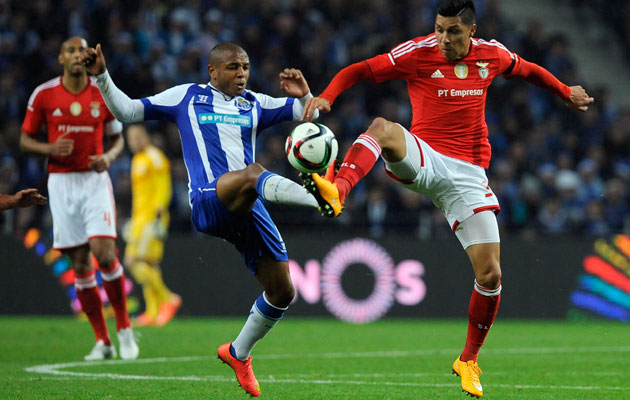 The first half of 2014/15 confirms an uncomfortable truth about Portuguese football. It is unlikely the extraordinarily strong teams FC Porto and Benfica have assembled over the past half dozen seasons will be seen again any time soon on these shores.

Benfica’s swashbuckling 2009/10 title-winning side contained the likes of rising South American stars David Luiz, Ramires and Angel Di Maria, while Porto’s all-conquering team of the following season was largely built around three other brilliant talents from the other side of the Atlantic, Fernando, Hulk and Falcao. Unfortunately for Portuguese football, other European clubs have caught up in terms of scouting top talent from afar. Moreover, the chronic financial problems afflicting the game in the country now necessitates the sale of young stars – whether snaffled from abroad or home-grown – almost as soon as a glimmer big potential is shown.

In this backdrop, it is no surprise that the overall quality of the Primeira Liga has visibly decreased this campaign with neither Benfica, Porto or Sporting able to string together a sustained period of convincing high-quality football. Not that the title race is any less exciting for it. You could argue quite the opposite. The fact all three of Portugal’s traditional Três Grandes are exhibiting their particular problems is threatening to level the playing ground.

Benfica’s excellent results in the league have failed to mask a series of substandard performances. Indeed, another abject Champions League failure (the Eagles have progressed from the group phase only once in the last five seasons) would have led to pressure on coach Jorge Jesus if not for the legitimate excuse that losing five first-team regulars in the summer would inevitably take its toll.

Should Benfica remain top of the pile until the finishing line, it will be the Lisbon club’s first back-to-back championships for three decades and will likely lead to the charismatic coach signing on for a 7th straight season at the Estadio da Luz – an unprecedented stint in modern times. However, the loss in the January transfer window of the team’s midfield heartbeat Enzo Perez to Valencia could prove a sale too far.

Particularly as arch enemies Porto are at last reaping the benefits of a summer of considerable investment. Julen Lopetegui was fiercely attacked for his rotation policy in the early months of the season, with criticism reaching a crescendo when fielding a weakened side against Sporting in the Portuguese Cup and consequently crashing to a 3-1 home defeat, with detractors accusing the coach of “not understanding Portuguese football”. Performances and results improved significantly when the coach started sticking to a more settled starting XI.

The unstoppable goalscoring of Jackson Martinez and the intelligent and incisive football of 20-year-old Oliver Torres bode well for an assault on first place in the second half of the season, as well as further progress in the Champions League. The Dragons negotiated the group phase with some aplomb and will be confident ahead of a last-16 tie against Basel.

Sporting’s fans continue to believe the club is on the cusp of breaking the duopoly in Portuguese football – Porto and Benfica have won the last 12 Portuguese titles. Both rivals are set to slash investment in player recruitment and rely more on youth development, which is the one area where Sporting consistently outperform all other clubs in Portugal. Two draws and a victory in the three direct clashes with the top two this season lends weight to the argument that Sporting are increasingly competitive.

However, a series of costly dropped points against mid-table teams means the Lions are playing catch-up.

A bizarre self-fabricated crisis over the Christmas break did little to help matters. Club president Bruno de Carvalho wanted to sack promising young coach Marco Silva, only to backtrack when it became apparent the overwhelming majority of Sporting’s fans were opposed to such a decision. The storm blew over, but only time will tell if the episode will undermine the big strides Sporting have taken in the past 18 months towards becoming a relevant player again. 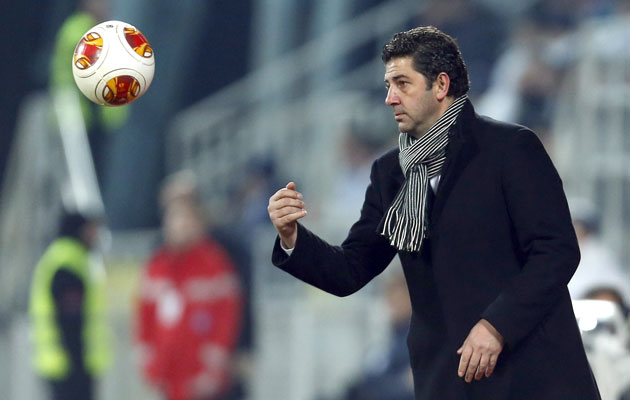 Yet the story of the first half of the season centred on the club with Portugal’s most fervent supporters, Vitoria Guimaraes, and the miraculous job their aptly name coach Rui Vitoria is doing. The 44-year-old tactician was appointed in 2011 and had to contend with a club in financial meltdown, wages in arrears and the forced sale of the few bankable assets in the squad.

He immediately put emphasis on youth players – in truth he had little choice – with spectacular results. As well as constructing a competitive team each season, in 2013 he led the club to its first major silverware, beating Benfica in the final of the Portuguese Cup. The achievement is all the more remarkable given that each transfer window most of the young pearls are sold. The perilous state of the club’s finances makes it impossible to hold onto them. At the time of writing Guimaraes’s most used player this season, Adama Traore, had been sold to Basel, and midfield dynamo Andre Andre is also expected to leave. Should a reasonable bid come in for commanding centre-back Joao Afonso, brilliant Ghanaian midfielder Bernard Mensah, or supersonic Cape Verdean winger Hernani Fortes, they too will likely be on their way.

The uncomplaining Rui Vitoria recognises the tough hand he has been dealt comes with the territory. “We have the cheapest team in the Primeira Liga; our budget is even lower than a lot of second division clubs. Our reality is completely different to our rivals,” says Vitoria. “Everything we’ve achieved, we’ve done in the background of a crisis, working with unknown players. Nowhere in Portugal or in Europe is there a better quality/price ratio than at Vitoria Guimaraes.”

So successful has the coach been at nurturing young talents, Vitoria is seen as a strong candidate to replace Jorge Jesus at Benfica one day, whose president Luis Filipe Vieira has repeatedly said the club will be shifting to a team based around academy players. Watch this space.