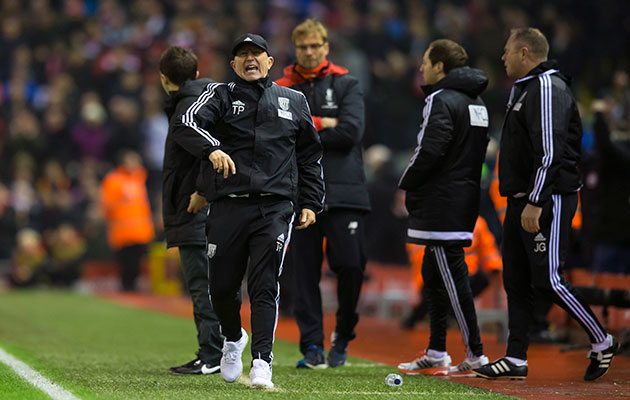 “We apologise. We actually played three longer passes in 99 minutes than what Liverpool played in that game. Sky TV came out with that stat.

Liverpool manager Klopp lambasted the visitors’ approach to last weekend’s Premier League encounter at Anfield, which ended in a 2-2 draw, accusing them of ‘only playing long balls’.

The German, who also refused to shake Pulis’ hand following the game, was described as a ‘ bit of an idiot’ by West Brom midfielder James McClean.

And now Pulis has addressed Klopp’s comments in a reply dripping with sarcasm.

“It was disappointing, but he’s got his opinions and he can say what he wants,” said Pulis.

“We apologise. We actually played three longer passes in 99 minutes than what Liverpool played in that game. Sky TV came out with that stat.

“So as a football club we apologise to Liverpool for playing three more longer passes than they did. There’s always a bit of spin put on things these days.”

Warming to his theme, Pulis then highlighted the discrepancy in spending between the two clubs.

“I’m not annoyed – I’m just stating the facts. Forget all the spin – that’s the facts. That was the value of our team on the pitch.

“I don’t know the fella and I don’t want to say anything else. They were the facts.”

It looks folks, like we have the makings of a good old fashioned managerial feud.