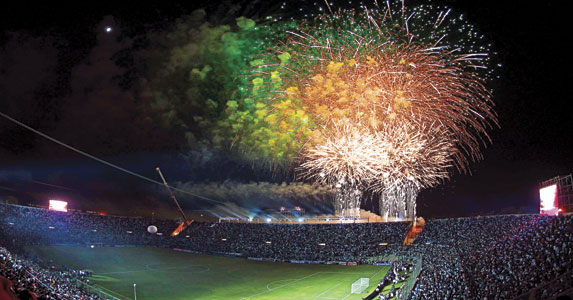 Let’s go round again! After a spell of neglect, the Copa America was brought back in 1987 and has since been staged in all of South America’s 10 footballing nations – in the case of Paraguay, Colombia and Venezuela, for the first time. Now a new circuit begins in Argentina, where the ball started rolling again and, indeed, where the first Copa was staged way back in 1916.

Much has changed in the 24 years since the tournament’s resurrection. The previous year Argentina had won the World Cup with a team in which more than half the starting line-up were based at home. Brazil took a squad in which the number of players with European clubs was limited to two veterans.

Since then, of course, the floodgates have opened. Club football in South America has become an export industry, with talent whisked across the Atlantic at an ever-earlier age.

Given this scenario, and bearing in mind the chasm which has opened up between club football in Europe and South America, the performances of Brazil and Argentina’s national teams have held up remarkably well. Last year’s World Cup offered powerful evidence of the continent’s strength in depth. All five of the South American teams were competitive and only Chile – who were eliminated by Brazil – failed to make the quarter-finals. Uruguay, who were South America’s fifth-best team in qualification, finished fourth in South Africa.

It would be inappropriate, however, to credit the rebirth of the Copa America for the strong showing of the continent’s national sides. Far more important in this regard has been the introduction of the marathon format of World Cup qualification, where all 10 teams play each other home and away in a giant league. With this system in place the South American national teams have, for the first time, enjoyed the type of calendar that the Europeans take for granted: regular competitive games with guaranteed income, allowing top-class coaches to be hired, giving the teams continuity and the chance to develop in terms of tactics and confidence.

This change has been directly behind the remarkable rise of Ecuador, who went from whipping boys to the world’s last 16 in under 20 years, and the equally extraordinary progress of Venezuela, who for the first time will go into the next set of World Cup qualifiers with a realistic chance of getting through.

The introduction of the marathon World Cup qualification format in 1996 inevitably had a detrimental effect on the Copa America. At the time, the tournament was being played every two years and found its relevance greatly reduced by the sheer weight of competitive fixtures. In 1997, 1999, 2001 and 2004 the Copa featured many understrength, experimental teams.

The role and timing of the tournament in the international calendar had to be re-thought and, starting with the last Copa in 2007, it would appear that the right answers have been found. Now staged every four years, the Copa America has been placed in a coherent and interesting slot.

International football turns in a four-year cycle. For South American teams the first year – the one following
a World Cup – is for appointing new coaches and making some money with lucrative friendlies. At the end of that year, the Copa America announces the return to competitive action. Coaches will then hope to emerge from the Copa with a battle-hardened team that is ready to face the gruelling challenges of the World Cup qualifiers which get under way soon afterwards.

Indeed, the coaches of nearly all the South American teams this year have been stressing that their priority is building for a place in 2014 and that the Copa is a test on the way, rather than an end in itself. Of course, once the action kicks off and the adrenalin kicks in, all involved will be dreaming of doing a lap of honour with the trophy on July 24.

But there is another point to the Copa America, beyond that of being a glorified World Cup warm-up. The Copa offers an excellent opportunity for investment in stadiums and sporting infrastructure. And, in South America, that frequently presents a chance to counteract a historic imbalance.

Investing in provinces
Many of the countries in the continent are extremely centralised – the legacy of a colonial economic past whereby raw materials were exported and manufactured products brought in. Typically, the port where this trade took place grew into a giant capital city, which lorded it over an underdeveloped hinterland.

As football is the game of the city, this domination is reflected in the way that the major teams tend to be clustered together in the capital. One of the prime aims of recent Copas has been to decentralise the football of the host country by investing in the provinces.

All of this applies strongly to Argentina, where the national title has rarely left greater Buenos Aires. Estudiantes of La Plata have established themselves as a major force, but La Plata is just an hour’s drive from the capital. Elsewhere, the pair of clubs from Rosario, Central and Newell’s Old Boys, each have a handful of titles, but that is it.

On the seven occasions that Argentina staged the Copa between 1916 and 1959, everything took place in greater Buenos Aires. The 1987 tournament was a little more ambitious – there was a group each for Rosario and Cordoba – but in 2011 the Copa America will be a genuinely national affair.

La Plata will stage more games than any other venue, a decision clearly inspired by the construction in 2003 of a new stadium which, with the recent addition of a roof, is one of the most impressive new grounds on the continent – although the condition of the pitch is a cause for concern.

Rosario misses out this time, with the city, presumably, having to be content with staging the Argentina-Brazil World Cup qualifier in 2009. Instead, nearby Santa Fe is being used, and the centre of the country is represented by Cordoba, where the stadium was built for the 1978 World Cup and now bears the name of the star of that tournament, Mario Kempes.

Another venue built for 1978 is in Mendoza, over in the wine growing region near the border with Chile. Nearby San Juan is another host city, with the only stadium constructed especially for the tournament.

And there are two venues up in the north, in the foothills of the Andes, near the frontier with Bolivia. One is Salta, whose compact stadium was built for the 2001 World Youth Cup, the other is Jujuy, a city with the nickname of “the little silver cup”.

A rather large silver trophy will be presented to the winning captain in River Plate’s Monumental stadium on July 24 in the only game taking place in Buenos Aires – and it is surely fitting that the showpiece occasion will be staged in the city where the first Copa America was contested 95 years ago.