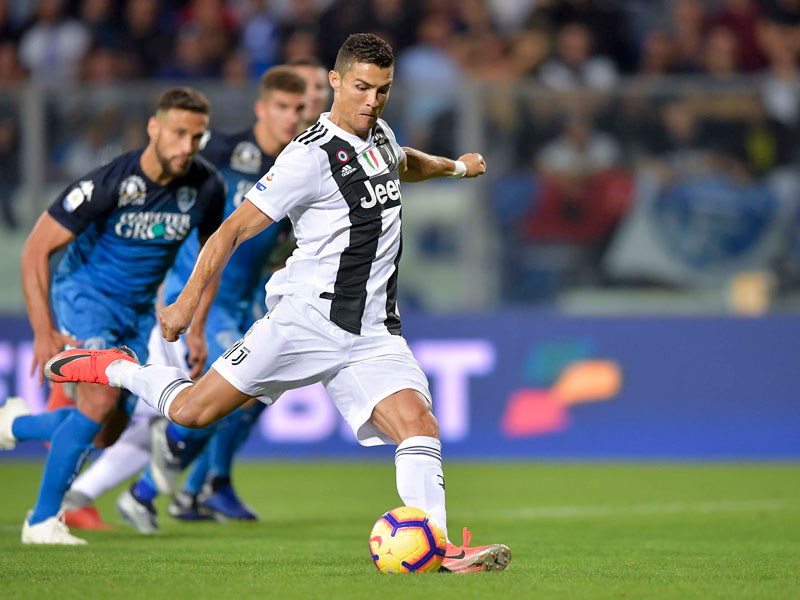 Paddy Agnew’s Notes From Italy: Ronaldo Does It All Against Empoli

This was the weekend when Crisitiano Ronaldo treated us to a more than passable imitation of “Roy Of The Rovers”. Week by week, match by match, Ronaldo seems ever more fundamental to the workings of Italian champions Juventus – as an inpirational leader, a creative attacker and last but not least a goalscorer.
Last Saturday, however, playing away to little Empoli, Ronaldo went a step further with an electric demonstration of all the above qualities, and more besides. After a disappointing first half performance both from him and from Juventus, he grabbed hold of the game early in the second half, scoring both Juventus goals to reverse a 1-0 losing scoreline and set up Juve for a 2-1 win that had the word “singlehandedly” written all over it.
After that convincing 1-0 win against Manchester United in their midweek Champions League tie, it was only to be expected that Juventus might be just a little slow to get themselves into a truly competitive frame of mind against relegation battlers Empoli. Physically, energy reserves were running low.   Mentally, their motivation registered just above anti-climax and a long way short of “all fired up”.
At half time, the unbeaten league leaders looked as if, incredibly, in a week when they had given one of their best ever European performances, they were about to slip up on the banana skin of little Empoli. However, the team, and not just Ronaldo, finally woke up to the task and set about Empoli with a powerful second half resurgence which yielded a Ronaldo-scored penalty within nine minutes of the restart.
15 minutes later, however, CR7 wrapped up the business with a trully spectacular 30 yard drive which swerved, swung and dipped at an average 90K per hour all the way into the top corner of the Empoli net. Captain Marvellous to the rescue.
The statistics confirm what we see on the pitch. Not only is Ronaldo already his side’s leading Serie A goalscorer on seven goals (next up is Mario Mandzukic on four) but he also dominates the volume of the Juventus attack. For example, he has had 78 shots on goal as opposed to 18 from team mate Paulo Dybala, the next up in this internal classification.
[collection name=”small” accordion=”mobile” excerpt=8]
None of this comes as a surprise but it certainly resonates loud and clear  on the day that his former club, Real Madrid, were beaten 5-1 in El Clasico by Barcelona. From matchwinning goals like this to two million dollar wrist watches and from accusations of rape through to allegations of tax evasion, Ronaldo might seem to read like a bad Holywood “B” movie script.
However, this is no cartoon strip, this Roy of the Rovers is for real. Coach Massimiliano Allegri put it this way minutes after Saturday’s win, saying:
“He is proof that in practice, he is even better than in theory. Children in (under age) teams need to see things like that…you don’t often see a goal like that, he has such extraordinary athletic quality…”
24 hours later, a positive week for Juventus ended on an even better note when their closest challenger Napoli were held to a 1-1 home draw by AS Roma. It was only at the beginning of time added-on that Belgian Dries Mertens whacked home the deserved Napoli equaliser which had come at the end of a game played largely in the Roma half as witness the possession stats of 63% Napoli, 37% Roma.
At the end of a week when both sides had performed well in the Champions League – Roma were 3-0 home winners against CSKA Moscow and Napoli drew 2-2 away to PSG – both probably had reason to be happy with the draw. However, in classification terms, it means that the Old Lady reclaimed her six point lead at the top, six points clear of joint second placed Napoli and Inter.
Which remind us that this was a good weekend for Milanese football, with both Inter and AC Milan bouncing back from midweek European losses with a Serie A win. Inter, beaten 2-0 by Barcelona in the Champions League, pulled off an important away win when defeating Lazio 3-0 at the Olimpico to move into joint second.
Likewise AC Milan, beaten 2-1 by Real Betis in a midweek Europa League tie, recovered from that with an important 3-2 home win against in form Sampdoria. That defeat by Betis had even prompted speculation that the club would shortly be sacking coach Gennaro Gattuso.
Ironically, with a rescheduled game against Genoa to play this Wednesday, Gattuso’s Milan could now find themselves in fifth place by next weekend, right on the edge of the Champions League zone. For the time being, at least, Gattuso’s critics have been silenced.