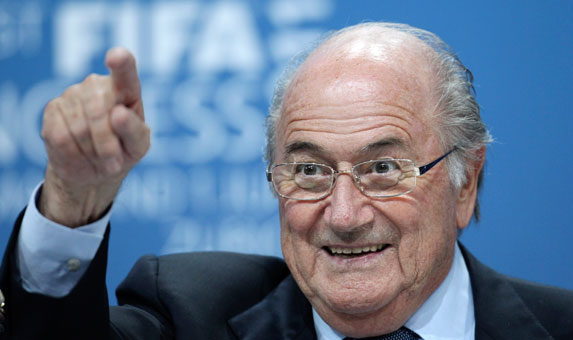 When the best footballers in the world come together, joined by “King” Pele and “Kaiser” Franz Beckenbauer, and when there is a world-famous music star like Shakira, the atmosphere at a ceremony like that in Zurich is overwhelming. Football is an event, it is emotion, an attraction in the entertainment schedule of modern people. Even the newspapers in the German-speaking part of Switzerland have reported positively about that evening – which means we did a good job.

Shakira also performed the 2010 World Cup song. What is her relationship with FIFA?

At the ceremony Shakira announced that she would like to support FIFA in its social projects. It would be great to have a woman with such charisma at our side.

How united is the FIFA “family”?

At the FIFA Congress on June 1, 2011, there were only a few who didn’t agree with their leader. I received more than 91 per cent of the votes, which shows that the football family stands united. And when the Congress ended, 98 per cent agreed with the reforms I proposed. That’s a sign of deep confidence. The FIFA members trust in me. They are sure that, together with the FIFA executive committee, I will manage to lead our ship back into calm sea and keep on course. In these turbulent times many people forget the positive things that FIFA has achieved.

And what do you consider to be FIFA’s greatest achievement?

Football is important and popular all over the world. Three hundred million people play football. More than a billion watch football. Football can build bridges and make people come together, especially in countries where there is war or a similar situation. When Iraq was occupied, people still played football. Just like in Afghanistan and Pakistan. In Palestine a women’s league has been established. And the Libya national team qualified for the African Cup of Nations. Football has become something great, a social and cultural good. My most important goal is to establish that social-cultural element
in our society. Football is a school of life based on discipline, respect and fair play. We want to establish these elements of football in families, in society, in politics,
in everyday life.

Football has become a huge economic machine. And where there is much money at stake, the gamblers aren’t far away. It is not easy to keep these gamblers under control. We need players who act as role models. In 1988, the German Frank Ordenewitz became one of our first fair play awardees. When he was asked by the referee, he admitted to having handled the ball. That was pure sport. In Zurich we honoured the Italian player Simone Farina for his courage in refusing to take part in match fixing, helping to identify the masterminds and rejecting their ¤200,000. That is the football of today. If we had more men like him, FIFA wouldn’t have to co-operate with Interpol.

We realised that in 2010, when the 2018 and 2022 World Cup venues were chosen. Half of the executive’s members were involved in candidatures. Cunning English journalists set traps in which some fell. It became evident that not everything that glitters is gold with some people. After that, the FIFA ethics committee became involved. That’s why I suggested that in future the venues of the World Cups should be chosen by all of the members, not only by the executive committee, which was accepted by an overwhelming majority. And that’s why we implemented reforms and created the four task forces: for transparency and surveillance; for revision of statutes, with chairman Theo Zwanziger; the ethics committee; and Football 2014, with chairman Franz Beckenbauer. And we also persuaded the renowned expert for governance and anti-corruption, professor Mark Pieth, to become chairman of the independent committee of governance.

Just how independent are these four task forces?

All the task forces are willing to increase transparency and to implement far-reaching reforms.

And what time-frame has been set?

The major part of these reforms can be passed by the Congress which will take place in May in Budapest. I want the reformation to be finished by 2013, when the Congress comes together in Mauritius.

The supreme court of the Swiss canton of Zug has asked FIFA for access to the ISL files. It is said that the documents of the former
FIFA marketing agency, which went bankrupt in 2001, contain the names of corrupt officials. Why haven’t these files been made public yet?

I have been trying to open these vexed ISL files for a long time. I am ready to do so now – if the court agrees and there are no more appeals.

Do you know their contents?

I know about it rather vaguely, with no judicial details. As a matter of fact, I never received any payment – which the court confirmed long ago, in June 2010.

Do you know who is named?

Some of them no longer hold their positions, others have been suspended by the ethics committee. In Switzerland, until 2007, no law existed which declared payments to committees illegal. That means we are not talking about criminal offences. The law was changed in 2007 and the court expressed its view that recipients of payments must pay back part of the money. The position of FIFA remains the same: we didn’t lose any money. We received all the money which had to be paid according to our TV and merchandising contracts.

So there will be no “tsunami”, as threatened by Jack Warner?

No, there will be no tsunami. The former vice-president Jack Warner claims that in 1998, when I was elected, I gave him the TV rights for Trinidad for one dollar. This is not true. We had no influence on the issue of those rights. He gained them from the OTI, the Organizacion de Telecomunicaciones Iberoamericanas. Such stories are spread without any verification. I know what my mistake was: I made FIFA profitable again, after years of deficit, when I took office in 1998.

You did not vote for Qatar to host the 2022 World Cup, but UEFA president Michel Platini did…

I told nobody about my vote. It is a secret ballot. Platini said he voted for Qatar. If you want to know about his reasons, I am afraid you will have to ask him.

After he was elected to the executive committee, Theo Zwanziger, the president of the German FA, called for a review of the 2022 decision. Why did you ignore his request?

When the decision was made he was not a member of the executive. Recently I addressed the committee, saying that we have to speak with one voice and show solidarity with one another.

Could the 2022 World Cup be moved to the winter?

I assume you are asking that question because Michel stated that no one could play in the summer time when it is that hot. FIFA selected the venue under the condition that the tournament will be played in June and July. If anything is to change, Qatar would have to apply to FIFA. There has been no such application. If there was, the executive committee or the Congress would have to decide. But there is not much time left. We are about to set up the international match calendar for the years to come after 2014. We have to know when the World Cup will take place to do that.

Will the clubs be consulted in setting up the match calendar?

It is not FIFA alone that does that job. We co-operate with the general secretaries of the confederations. The match calendar is good, and we listen to suggestions. We did so over the issue of the double match days for the national teams, which are now scheduled for Fridays and Tuesdays instead of Saturdays, Sundays and Wednesdays. Now the players have more time to recover. The discussion about the match calendar is a discussion about the clash of interests between the clubs and the associations, as well as the national teams. Sometimes the people involved forget about the players.

Is the dispute between the clubs and the associations just about money?

That’s the decisive matter. The clubs have a duty to release players for the national teams. The associations take out insurance, but that was not enough for the clubs. At the 2010 World Cup, we paid more than €40million to the clubs. In Brazil in 2014 it will be €70m. Now the clubs are demanding astronomical amounts for 2018 and 2022. We are going to discuss that with Karl-Heinz Rummenigge, the president of the European clubs.

Speaking of Rummenigge, what was your reaction when Bayern Munich’s CEO compared you to an eel on which “it is difficult to get a grip”?

I don’t care about that any more. An eel is a fish, and I was born under the sign of Pisces. Our personal contacts have always been good. Whenever Rummenigge gets back to Munich, he fires again. If I took every statement seriously I might as well enter a monastery.

What about Bayern president Uli Hoeness, who wants a more open and public approach to discussing football’s problems?

I don’t have to deal much with Uli Hoeness. Let me tell you something I told Munich’s mayor, Christian Ude, before a decision on the venue for the Winter Olympics 2018 was made. Uli Hoeness and others badly slandered South Africa in the 2010 World Cup run-up. I made it clear to Ude that Paris did not become the 2012 Summer Olympics’ venue because they hadn’t cared about the African votes. Issa Hayatou, the president of the African football association CAF, said to Franz Beckenbauer: “You cannot count on a single African vote for Munich. We didn’t forget about the way you tried to destroy the African World Cup.” You can’t get the Olympics without the 12 African votes.

At the end of last year you demanded the establishment of professional referees. Does that mean German officials will be banned from future international competition?

German referees are always welcome. But if they want to take part in the 2014 World Cup they are obliged to be professionals. The German Football Association has to establish a system in which the referees are its employees.

I am convinced that Germany will solve that problem. In France, the referees in every professional league are professionals. In England, Brazil, Argentina, Mexico, and partly in Italy, that is common practice. There are schools for referees in some countries of the Middle East and in North Africa. In Honduras you can even study the subject at university.

And what about goal-line cameras? Will they be implemented before the 2014 World Cup?

In Brazil 2014 we will have the goal-line technology. We cannot afford the shame of 2010 again, when England was denied an equaliser against Germany. I was paralysed when I saw that.

Will another referee be needed when goal-line cameras are introduced?

No, no. Goal-line technology is not that complicated. The referees will be informed by a sound signal. There is no need for yet another referee. That will be discussed, just like the chip inside the ball, on March 2 and 3, by the International Football Association Board. Then, additional referees will be another issue.

How many referees would you like
to see involved in a game?

There are now seven referees involved in a Champions League game. We did well with three or four. It is possible to assign more, but most of the associations do not have enough referees for that, and only a very few clubs can afford to pay for such a large number. It is UEFA that pays for the current experiment. In Mexico that experiment
has been finished due to a lack of good referees.