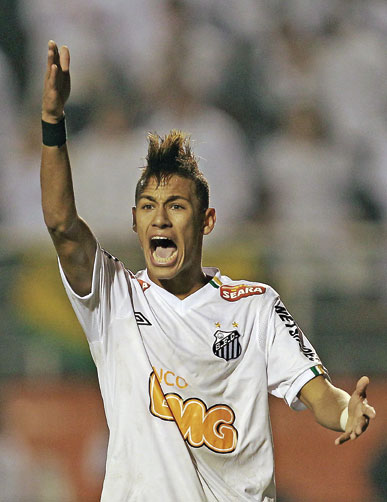 Neymar
Santos (Brazil)
AGE : 19 (05.02.92)
POSITION: Forward
The 52nd Libertadores Cup was Neymar’s campaign, the moment when the brilliant, petulant boy prince of Brazilian football became an international star, taking the first steps out of his comfort zone as he was forced to deal with refereeing very different to what he is used to.

In this aspect, Neymar is the fruit of the poisoned tree. Frail and dazzlingly skilful, he is an obvious target for defenders. Having grown up in an environment where diving is tolerated and profitable, he goes to ground in a way that is frequently not only an attempt to con the referee but comes across as a plea for marks for artistic interpretation.

A feature of his young career, though, is his capacity to learn from experience. During the course of the Libertadores he seemed to understand that he would not be awarded so many cheap free-kicks. But if he cut the diving down, he did not cut it out. His antics still cost him a booking – and some warnings – in the first leg of the Final.

Neymar, then, is still a work in progress. But he is making progress, and the quality of his work gives rise to hopes that he could grow into a genuine sensation of the global game.

His ball control is flawless, he can glide past his marker on either side and he has a graceful burst of acceleration, while his finishing off either foot is uncommonly calm and precise.

Hysterically touted at the time, Robinho has fallen short of the expectations surrounding him when he moved to Europe six years ago. Neymar is a better prospect, but he will have to confront similar challenges as he moves towards the greatness which is in his grasp. His temperament will be tested, but his talent is undeniable. 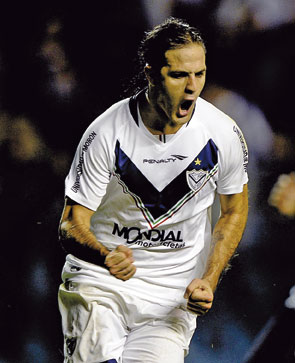 Juan Manuel Martinez
Velez Sarsfield (Argentina)
AGE: 25 (25.10.85)
POSITION: Forward
The support striker is one of a number of Argentinian players who have found that their careers pick up momentum after a move elsewhere in South America.

Yet another product of Velez Sarsfield’s impressive youth system he was struggling to get a game in the first team before a loan move to Cucuta in Colombia gave his career a kick-start. He was a key component for the 2007 shock Libertadores Cup semi-finalists and – with his name established after another loan spell, this time with Al Shabab in Saudi Arabia – he was ready to return to Velez in 2008 and start making a decisive contribution.

The strength of his tight dribbling has given him the nickname Burrito (the little donkey), a tribute to a style of play similar to Ariel Ortega. Able to thread his way to the byline on either side, he can cut inside and finish off his left or right foot. After winning a penalty against Portugal on his Argentina debut in February he was unlucky to be left out of the Copa America squad.

He was also unfortunate not to be taking part in this year’s Libertadores Final. In the second leg of the semi-final against Penarol he had a goal wrongly ruled out for offside and won the penalty that was missed by Santiago Silva. Had one of those counted Velez, and not Penarol, would have met Santos in the Final. 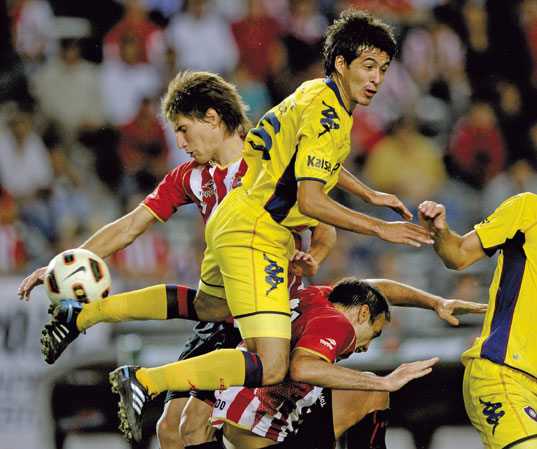 Ivan Piris
Cerro Porteno (Paraguay)
AGE: 22 (10.03.89)
POSITION: Defender
During the course of the Libertadores, Cerro Porteno coach Leonardo Astrada came to the conclusion that he had the best right-back in South America and, even if the 22-year-old’s lack of height was occasionally a problem when defending at the far post, Piris was highly impressive in everything he did.

His pace, balance and speed on the turn were all highlighted in duels with Neymar of Santos, but he was at his most eye-catching pushing forward. He developed an excellent relationship with Cerro playmaker Jonathan Fabbro, who would switch the play by passing the ball into space for the right-back to run on to. Piris took full advantage of such service, curling in some classy crosses, providing intelligent passes and, against Colo Colo, crashing in a superb goal when his side seemed to be on the brink of first-round elimination.

However, the Paraguayan club’s run to the semi-finals will in all probability hasten the departure of their promising defender, with a number of European clubs adding his name to their pre-season shopping list. 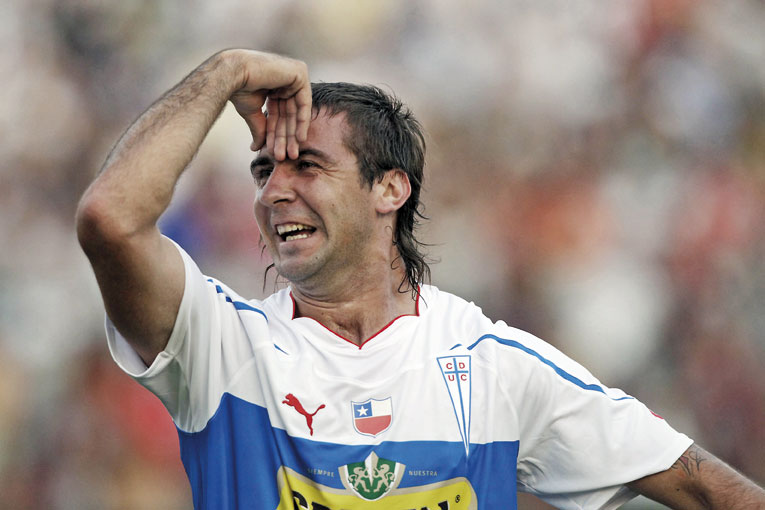 Lucas Pratto
Universidad Catolica (Chile)
AGE: 23 (04.06.88)
POSITION:Forward
A big centre-forward wearing the number two shirt is surprising enough, but then the career of this Argentinian from La Plata is full of the unexpected.

He came though the youth ranks at Boca Juniors, but with few first-team opportunities he was loaned out to Tigre and Union Santa Fe, even having a spell in Norway with Oslo-based club Lyn.

His next loan move took him to Chile’s Universidad Catolica as part of the deal that saw Gary Medel go the other way. With four goals in 17 games, he played his part in Catolica’s domestic title last year, but no one could have foreseen the impact he would make in the Libertadores. Strong but quick enough to play up front on his own, the burly striker looked the complete package, scoring six times as well as setting up team-mates with his strength on the ball and vision.

After proving his worth in Catolica’s run to the quarter-finals, they exercised their option to sign him…and then immediately sold him on – at a considerable profit – to Genoa of Italy. 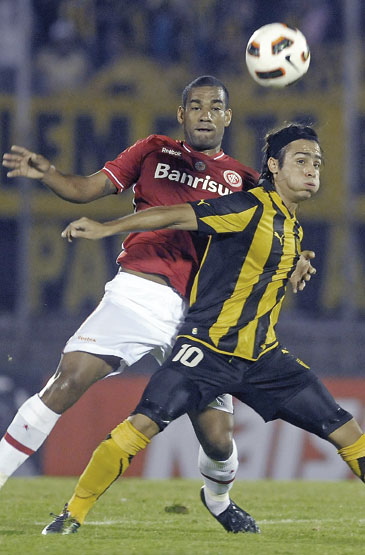 Alejandro Martinuccio
Penarol (Uruguay)
AGE: 23 (16.12.87)
POSITION: Forward
Although well shackled by Adriano in the Final, nobody did more than the Argentinian to ensure Penarol made it there for the first time since 1987.

In recent years the football played by this historic club has often been painfully slow, the line-up full of veterans returning from Europe. As the Libertadores got underway a repeat performance seemed likely – until Martinuccio replaced 35-year-old Tony Pacheco and gave a kick start to the campaign.

The nippy left-footer added much needed pace and thrust to the counter-attack as he shone in the space behind big centre-forward Juan Manuel Olivera. Santos had seen enough to be worried and made stopping him the centre of their defensive plan.

However, stopping Martinuccio’s career progress would seem to be harder. Having signed in 2009 from Nueva Chicago of the Argentina second division, there is now interest from Brazil and Italy, and the time to cash in has surely arrived. 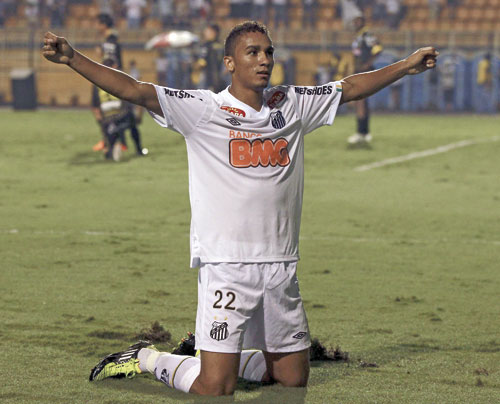 Danilo
Santos (Brazil)
AGE : 19 (15.07.91)
POSITION: Midfielder
If it was fitting that Neymar’s goal in the second leg of the Final opened up the path to victory, it is also appropriate that the winner came from Danilo. In his own less heralded way, the talented utility man is as much a symbol of the current team as the greatly hyped striker.

In recent years Santos have not only concentrated on producing their own players, they have also been on the look out for interesting youngsters coming through at other clubs, and Danilo is one such case, snapped up after catching the eye playing at right-back for America-MG.

At the start of this year he featured at right back for Brazil’s Under-20s but, one of only three ever-presents in the Santos team, he spent most of the Libertadores campaign in the centre of midfield. Tall and powerful, athletic and two-footed, he looks at home wherever he plays.